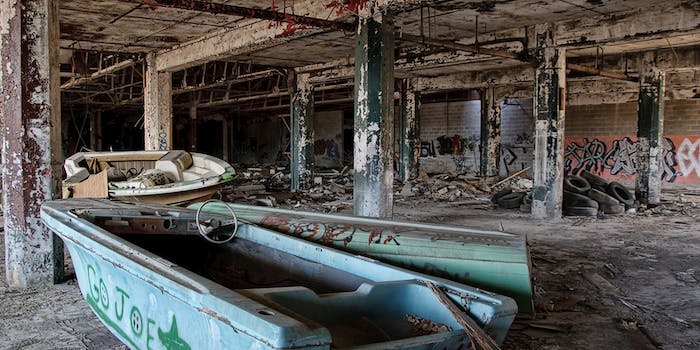 If we can talk to our phones, why can’t we fix Detroit?

I asked Siri why Detroit’s residents can’t get clean water, and all she said was: “Let me think about that.”

The United States is a nation where you can use an app to buy a public parking space, enter an open-source database to research protein folding, and ask your phone which planes are overhead. But it is not, apparently, a country where you have guaranteed access to potable water. In the city of Detroit, which has been ravaged by the recession, thousands of residents are having their water cut off for non-payment, in a situation that appears to be reaching the level of a human rights crisis.

In fact, thanks to pleas from Detroit residents, the United Nations is intervening, meeting with the Obama Administration to discuss the situation. This is a rather unprecedented move from the international human rights and global security body. While Americans may think of the United Nations as a group that sweeps into nations in the Global South to resolve human rights crises, the organization has authority over the U.S. as well, and in Detroit, it’s clearly time to act.

Notably, the U.S. has consistently refused UN attempts to enshrine access to clean, safe water as a basic human right. Though the UN has passed multiple resolutions asking that potable water be recognized as critical for human survival, the U.S. among a handful of other nations has resisted, refusing to ratify such resolutions. Nationally, the U.S. does not appear to think its citizens deserve to have their access to clean water protected, arguing instead that this is a states’ rights issue.

The story of Detroit’s water shutoffs starts with $18 billion in public debt, of which about $6 billion is accounted for by the Water and Sewage Department. The agency warned earlier this year that it would start issuing shutoff notices to citizens who refused to pay their bills, using language that was clearly designed to be preemptively protective in the event of legal challenge—the UN has determined in the past that shutoffs for inability to pay are human rights violations, while a simple refusal to pay is treated differently.

It’s not the first time Detroit has faced rising water debts and threatened to shut off water service, and it’s not a surprise, either. Monthly water bills average around $75, which is unusually high, thanks to the high infrastructure costs involved, and the fact that Detroit’s shrinking population is expected to shoulder more of the cost for keeping the water flowing. In fact, the city just voted to raise water bills, making the problem even worse.

When the city made an earlier round of threats and shutoffs, it accompanied them with an affordability program to help residents get back on track with their bills. This time around, no such offer is being made, and now, some residents have been out of water for weeks, including elderly and disabled residents. These are not people who are spitefully refusing to pay their bills, but rather people in genuine economic distress, and the UN is not impressed.

“Disconnection of water services because of failure to pay due to lack of means constitutes a violation of the human right to water and other international human rights,” a UN press release announced.

The release continued: “Leilani Farha, the expert on the right to adequate housing, expressed concern that children are being removed by social services from their families and homes because, without access to water, their housing is no longer considered adequate. ‘If these water disconnections disproportionately affect African Americans they may be discriminatory, in violation of treaties the U.S. has ratified,’ Farha added.”

In other words, one of the largest technological powers in the world can’t manage to keep water flowing for some of its poorest citizens, most of whom are people of color, who are being forced to rely on groups like the Detroit Water Brigade, which has taken matters into its own hands and started delivering potable water to needy residents. Even NGOs are getting involved: DIGDEEP, which originally started providing water services in Africa before expanding to Navajo reservations (where 13 percent of people can’t access safe drinking water) is also eyeing Detroit.

What does it say about the United States that it both refuses to commit to making clean drinking water a priority, and can’t ensure safe access to water for its citizens? Overall, only 0.6 percent of Americans, mostly in rural areas, have trouble accessing clean water. But the fact that the situation in Detroit has become bad enough to merit UN intervention is notable, especially since in an allegedly “post-racial” United States, this event is indeed disproportionately affecting black residents, just as feared by UN representatives.

In the hot summer months, access to water is the difference between life and death. Between basic hygiene and acute misery — along with the risk of severe infections and other medical complications. As Leilani Farha noted, it means that children are being taken away from their homes, and it likely means disabled residents are being forced into institutions in violation of the Americans with Disabilities Act and Olmstead vs. L.C., a landmark Supreme Court case defending the right of disabled people to live in their communities.

There’s a ripple effect in Detroit that all the technology in the U.S. can’t seem to stop — there is no app for poverty, no central database to explain why a city sitting on the largest deposit of freshwater in the world can’t get that resource to its residents.  I asked Siri why Detroit’s residents can’t get clean water, and all she said was: “Let me think about that.”

Get back to me when you know, Siri.

Photo via Bob Jagendorf/Flickr (CC BY 2.0)