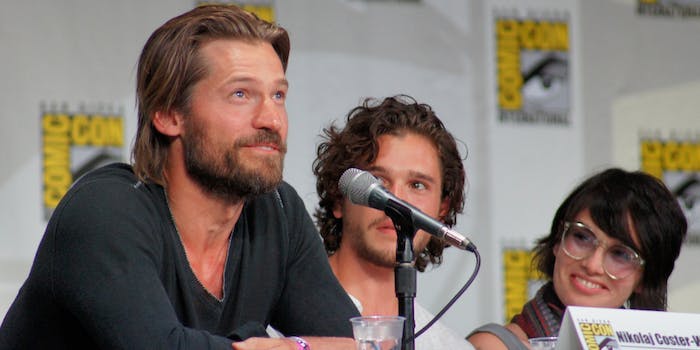 TV’s rape problem is bigger than ‘Game of Thrones’

Don’t forget that if a rape does happen, it has to continue to be a part of the larger story.

In the past few years, an increasingly identifiable trope has been steadily implemented among television’s most buzzed about shows. It’s not the use of anti-heroes, or tokenism, or killing characters, or any other practice that’s become quite as overt. Instead the current go-to twist for TV’s most acclaimed programs is rape.

Technically, rape on TV isn’t anything new, just as rape everywhere isn’t anything new. From Luke and Laura and Edith Bunker to the entire run of Law and Order: SVU, television has portrayed rape in almost every way possible. And it’s not the only kind of media to do so. Film continues to use rape in a wide spectrum of ways too. Recently, everything from poorly reviewed schlock like 3 Days to Kill, to critically acclaimed Oscar-winners like 12 Years a Slave have made rape a prominent plot point.

However, the difference between something like 3 Days to Kill and 12 Years a Slave (besides all of the other differences, that is) comes down to how rape factors into the overall narrative. In 12 Years a Slave, rape is part of the society that the characters live in. It’s a brutal but inescapable fact of life. But in 3 Days to Kill, it’s a plot device. The film’s use of rape has little to do with the realities of rape itself, and instead exists only to move the story forward.

While we’ve come a long way from southern plantation owners, rape continues to manifest itself in modern society through many, many avenues. Only now have we begun to scratch the surface on what rape culture truly is and how pervasive it is in all of our daily lives.

Yet somehow, amidst what many consider to be a new golden age of television, rape has been woven into many of the era’s finest shows in ways no more nuanced than in something like 3 Days to Kill.

The latest culprit may also be the medium’s most expansive: Game of Thrones.

Last Sunday’s episode, “Breaker of Chains,” featured not the show’s first rape, but what is almost certain to be it’s most notorious one. While mourning the death of her son, Joffrey, the hateful Cersei seeks comfort in the arms of the lately heroic Jaime (both her brother and her lover), but recoils at the touch of his newly acquired fake hand.

All of a sudden, the tables turn. The cruel one is no longer Cersei, but Jaime, as he scornfully pins her down and forces himself on her, the body of her deceased son above them on a table.

It’s a horrific scene, but what really makes it unfortunate is that it’s not actually in the source material. In the books, Cersei and Jaime do have sex at this moment, but their sex is consensual. Granted, there is the possibility that the show’s creators, David Benioff and D.B. Weiss, changed author George R.R. Martin’s text to better inform the direction they plan to take the show in the future.

But as Sonia Saraiya of the A.V. Club notes, this isn’t the first time Benioff and Weiss have done this.

In the show’s first season, Kahl Drogo has sex with Daenerys Targaryen against her will shortly after their marriage, which was also against her will. But in the book, although Dany doesn’t want the marriage, Drogo does obtain her consent before he becomes physical with her. Saraiya elaborates on these differences:

It’s hard to shake the idea that Game of Thrones, the show, doesn’t see a problem with pushing a scene from complicated, consensual sex to outright rape. It would be easier to accept that idea if it were clear what the show was trying to do with those changes. Rape is a tricky thing to use as character development, for either the victim or the rapist; doing it twice raises a lot of red flags. It assumes that rape between characters doesn’t fundamentally change the rest of their story—and it assumes that the difference between consent and rape is, to use the parlance, a “blurred line.”

Unfortunately, the show is wrong, on both counts. Changing a scene from consensual sex to rape is not just a pedantic issue of accuracy—it’s a problem with story. It changes that relationship.

Saraiya’s point is hard to ignore. Benioff and Weiss have gotten so many things right in their translation of Martin’s books, one has to wonder how they could miss seeing how these changes would affect certain characters’ relationships. Martin always meant for the world of Game of Thrones to be shocking, but usually that shock is warranted. The reader or viewer is supposed to be forced to reconcile how hard this world is for women, and maybe then reflect on how hard our world is for women.

But Saraiya goes on to ponder whether overtime, Benioff and Weiss are becoming more concerned with shock for shock’s sake.

Another major problem with the rise of rape on television is its inclusion as a explain-all for complicated female characters. At Entertainment Weekly, Karen Valby recently urged television writers to put a stop to this practice, imploring them, “Here’s something else to imagine: the idea that there are stories to tell about the sources of a woman’s anger, her ambition and fear, her brokenness and resolve, that don’t involve pinning her under some man’s heaving chest.”

Valby’s critique singles out Scandal, Downton Abbey, and House of Cards specifically, and by all accounts she’s right on each one of them.

For instance, on House of Cards, would we really have had a harder time believing that Claire Underwood was any less vengeful and calculating without the second season’s revelation that she was raped in college? The very fact she’s married to Frank shows how nasty she’s willing to get.

Or better yet, take the man in her life out of the equation completely. You’re still left with a conflicted, compelling, and morally compromised character who was no less fascinating before we knew about her rape.

It is worth giving the show some credit for continuing the discussion on sexual assault in the military, but it seems likely Claire’s decision to back away from the issue at the end of the season would have been just as devastating even if she hadn’t been raped herself. Of course, Robin Wright is a fantastic actress, and she grounds all the many elements of Claire Underwood in a remarkable way, but the show does her a disservice by assuming her character needed to be raped to feel real.

This only briefly touches on television’s current use of rape. Shows like Mad Men, American Horror Story: Coven, and many more have also tried to enter our collective discussion about rape and our country’s relationship with it.

And that’s a good thing. Discussion is the first step. But discussion alone isn’t enough. As television continues to become more intelligent and complex, so must the way television deals with rape.

Here’s the best way to start: Don’t use rape purely for shock value. Don’t use rape as a simple explanation for why a character is strong, sorrowful, or anything in between. And don’t forget that if a rape does happen, it has to continue to be a part of the larger story.