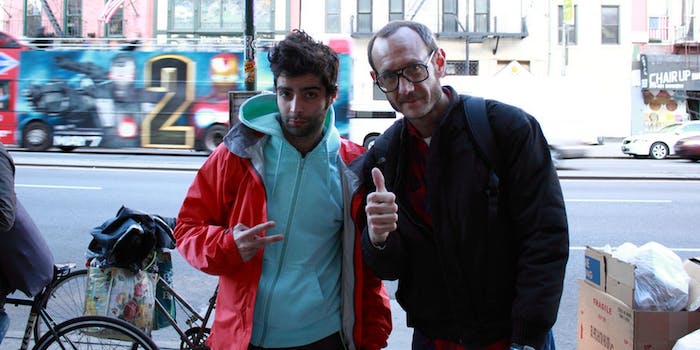 Terry Richardson defends himself against sexual assault accusations behind the veil of art.

Terry Richardson took out a glorified bench ad in the Huffington Post recently, proclaiming his innocence while asking the Internet to sit on his smirking, skeevy face. After years of being quiet, like a neglected wife in a Hallmark movie, he’s breaking the silence. “In writing this, I make a humble attempt at correcting these rumors, because I have come to realize that absent my voice in the conversation, all that remain are the lies.”

Imaginatively titled “Correcting the Rumors,” Richardson hopes to set the record straight on the well-documented and ubiquitous abuse claims lobbied against him from models who have worked with him. In a transcript with one model, Richardson allegedly claimed to be a “pervert like the rest in fashion.” When the woman he made this statement to refused his sexual advances, he allegedly said, “Then you need to work at mc donald, this is the lifestyle.”

But rather than engage with the tidal wave of criticism, Richardson prefers to continue to put his fingers in his ears and yell “Where’s my busy bee?” at the top of his lungs while he reaches for his palliative squeaky toy. Rather than taking those allegations—or sexual assault in general—seriously, he would rather cover himself with the dubious security blanket of art.

In what has to be the Citizen Kane of denials, the photographer says that people have always been out to get great artists, comparing himself to trailblazers like Helmut Newton and Robert Mapplethorpe. “People will always have strong opinions about challenging images, and the dichotomy of sex is that it is both the most natural and universal of human behaviors and also one of the most sensitive and divisive.”

Art becomes Richardson’s Twinkie Defense—because there’s a huge, huge difference between artistic expression and sexual assault. Folks like Robert Mapplethorpe kept the provocation in the pictures. Mapplethorpe wasn’t using art to pressure his subjects into sex and then deny it later on the same basis. If you care at all about the integrity of your work, don’t you want to make sure that the people you work with don’t feel routinely victimized? And when it’s pointed out to you that such is the case, wouldn’t you work to change whatever behavior is fueling those claims? Being a self-proclaimed “pervert” doesn’t make Terry Richardson a great artist. It makes him a creep.

Even if everything we’re seeing in Terry Richardson’s work was filmed with consent, that doesn’t mean that his professional practices didn’t foster a wider culture of abuse behind the scenes or that his allegedly predatory relationship with women wasn’t still a part of a bigger picture.

In his letter, Richardson gets on the pulpit to advocate for the “real victims of exploitation and abuse,” and you know, maybe he’s right. Maybe he’s totally blameless and maybe every single person who has ever worked with him is a liar. Maybe he’s like Arnold Schwarzenegger in every movie, a noble man framed by a secret society, and all Terry Richardson needs is his life back.

But even if he is innocent, Richardson has done nothing to show that he understands what rape culture is, or the effect he’s had on people, other than craft a four-paragraph denial. If Richardson wants to be actually provocative and do something that’s really sensational, he might do more than further a culture that would rather erase women’s experiences than actually engage with them. His statement doesn’t fight rape culture. It makes the problem worse.

Fighting rape culture is standing with victims of violence. Fighting rape culture is helping us all understand that we’re a part of that system, whether we think we are or not. We’re all complicit in a system of sexual exploitation, and Richardson should take ownership of his role in that. His response instead just feeds into the cycle.

In his conclusion, Richardson begs all of us not to rush to judgment and believe what the Internet or enough evidence to fill Scrooge McDuck’s vault has to say about him. He hopes that we’ll all further a discourse fueled by fact. I’d like to give him the benefit of the doubt.

Note: This story has been edited for clarity and length since its original publication.