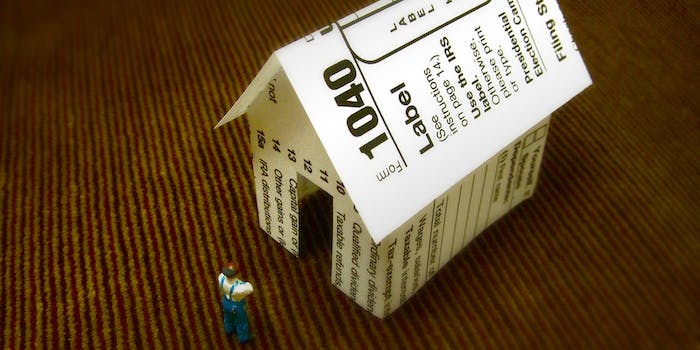 When it comes to making money, normal is whatever you want it to be.

To ease the stress of filing your taxes at the last minute, Google decided to offer up its divisive Glass technology for the price of (only?) $1,500.

Those following the ongoing conversation on Google Glass may have looked at the move as a way to generate interest in the product—because the price of Glass isn’t the only thing keeping Americans from buying a pair. They’re viewed as dorky, elitist, and symbolic of class warfare in San Francisco. Many are reluctant to dip their toes in the wearable wading pool, lest they be branded a “Glasshole.”

Widespread attacks on Glass users in the past few months attest to a market that might not be ready for Google’s vision of the future, and Tuesday’s one-time-only deal offered a way to change the conversation on Glass.

But in addition to generating PR for a lagging product by making Google Glass purchases into an event, Google’s limited sale was also a shrewd way to take advantage of the growing trend of Tax Day sales. Americans who filed early might have found yourself with a nice refund burning a hole in your pocket. When you have surplus cash flow and nothing in particular to spend it on, Glass satisfies that curiosity itch.

For others, an impulse buy soothes the pain of forking over money to the government. Buying a $1,500 toy might be like throwing gasoline on your bank account as it burns to the ground, but consumer logic doesn’t have to adhere to real-world logic. The market is its own reality.

And that reality is quickly changing. This year, retailers as diverse as Outback Steakhouse, Schlotzky’s Deli, and Office Depot are offering their own Tax Day deductions. At Hard Rock Cafe, the restaurant is allowing guests to literally “sing for their supper.” If patrons agree to perform one of eight pre-selected songs, their meal is on the house from 5 to 7pm. HydroMassage is just giving people free back rubs for the day, no a cappella karaoke necessary.

Giving out free (or discounted) goods to consumers on Tax Day isn’t just a nice gesture. It’s a stimulus package to get out and spend—good business for a corporate sector that’s still searching for spring’s answer to Black Friday or the miasmatic swell of Day After Christmas sales. After the Valentine’s Day frenzy, March and April bring relative doldrums, lacking a nice seasonal sales rush.

Think about these months from the perspective of a marketer. What Spring-themed events do you capitalize on in your advertising?

Easter is a difficult tie-in for a lot of companies, because there’s no obvious linkage between a Big Mac and pagan fertility rabbits. St. Patrick’s Day works so long as your corporation is Irish, selling alcohol, or called “Leprechaun Apparel.” Spring Break would be great—if colleges could mutually agree upon an annual Spring Break week. But with the flux in quarter and semester systems, that accord is unlikely.

The past holiday season proved that the business sector is desperate to find a way to spread the wealth of Black Friday, as retailers like Target, Macy’s, and Best Buy pushed up their sales into the holiday. Although CNN’s Jose Pagilery predicts that Thanksgiving could be the new normal when it comes to the week’s shopping rush, there’s nothing preventing the rush from surging even further forward to the day before Thanksgiving. When it comes to making money, normal is whatever you want it to be.

It’s unclear if consumers actually want the product Google is offering this tax season, but the discount was deemed an indisputable win for the company, as it preps Glass for a wide release. And as other retailers patent their own wearable tech, Google’s market logic just may win out. The Tax Day sales holiday might not be a thing yet, but three months ago, no one would have been caught dead wearing Glass in the first place. By this time next year, the face of normal could look very different.