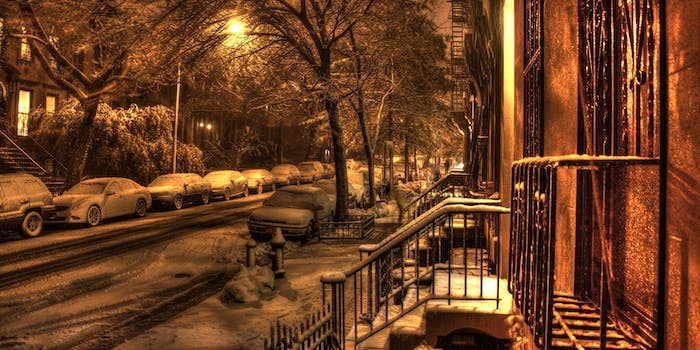 ‘Is Spike Lee a s**t stain?’ and other questions about the gentrification of Brooklyn

To answer the question posed by Biggie Smalls, “Where Brooklyn at?”

Recently, Michael Rapaport visited Huffington Post Live, to discuss his new movie; while he was there, he called director Spike Lee a “little shit stain.” You may be thinking to yourself, “Michael who?” To jog your memory—or to introduce you to the man—he’s a filmmaker and actor you might know from Hitch, Boston Public, and Justified. The two men once worked together back when Rapaport acted in Lee’s film Bamboozled; however, apparently, their recent animosity has nothing to do with their past––instead the two men are arguing over the future of Brooklyn and the effects of gentrification.

With each new dirty soy latte that gets ordered in a Brooklyn Starbucks, that question grows more and more difficult to answer. It really depends on who, or what, you mean when you say Brooklyn. Is it a place comprised of its squat brownstones and sturdy pre-war architecture? Or is it a community born of a mix of people and place?

The spark that set-off the feud between the two men were some comments Spike Lee made after a speech he gave at Pratt Institute. In a Q&A after his talk, a young black man asked Lee what were his thoughts on gentrification. He gave an impromptu and impassioned rant, which was summed up by Lee’s directive given to the gentrifying forces that are re-making Brooklyn in their image, “Get the fuck outta here!” That last part made his rant go viral.

Days later, appearing again on Huffington Post Live, Michael Rapaport responded to Mr. Lee, offering the advice that the director should “shut up.” Rapaport said Lee was ignoring the obvious fact things are better in Brooklyn. He pointed out that during the ’90s many neighborhoods in Brooklyn had been left “abandoned.” The actor, who often displays the intellectual prowess of a street brawler, attempted a knockout blow, dismissing the value of Spike Lee’s opinions by pointing out the fact the director had moved to the exclusive Upper East Side. To Rapaport’s view of the world, once Spike Lee left the old neighborhood, his opinions about Brooklyn no longer matter.

In May, Spike Lee appeared once more on Huffington Post Live, and he came ready to throw some blows of his own. He opened with this observation, “Michael Rapaport doesn’t know what the fuck he’s talking about.”

Lee drew out the most obvious point about gentrification: it’s inherently racist and based on class. He asked, “For the schools to get better in Fort Greene…why do we have to have gentrification? For the garbage to be picked up…why does there have to be gentrification?”

Lee argued that neighborhoods weren’t “abandoned” as Rapaport suggested, but that they were conspicuously, economically neglected, and that the neglect of the neighborhood was solely a product of a colonizing mentality. It’s something he called the “Christopher Columbus syndrome.” Lee connected what’s happening in Brooklyn to the long history of the exploitation of “neighborhoods” that once belonged to people of color.

Typically, the neighborhood is seen as undervalued, under-utilized, and primed for economic exploitation. All it requires is the dislocation of the people who call the place home. In the past, people of color were forced to move at threat of gunpoint, but these days, they’re forced to move by threat of ballpoint pen. As soon as they can no longer write that rent check, they have to move.

If, like Michael Rapaport, you see profits on bank statements and vegan bakeries as obvious signs of things being “better,” this sort of exploitative economic progress looks good, both on paper and in the streets. It really does have great value. Things have improved. Where once was economic blight and disadvantage there is now a thriving business baking gluten-free cookies. How can anyone say that’s not an improvement? Well, clearly, it is.

It’s true that Brooklyn used to be dirtier, grimier, meaner with crime, but the reason there was trash in the streets was because sanitation services weren’t a priority back in the ‘90s. Nowadays, the trash gets picked up. Spike Lee asked everyone to think about why that is. How come when it was a predominantly brown, black and Jewish neighborhood the trash trucks didn’t show up as often as they do now that young, prosperous, white people are moving into neighborhoods like Fort Greene?

A cleaner, safer Brooklyn, one that’s worth more to real estate developers, is a good thing. But why didn’t those same buildings have such incredible value until young white people wanted to move there? How you answer that comes down to one essential question: Is gentrification a passive process?

Is it the same as a forest: a tree falls, the environment changes, certain plants thrive as the fallen tree makes it possible for other plants to do well, and eventually, a new tree grows in the place of the old one and the forest is restored? Or is gentrification more like an invasive species pushing into an ecosystem? Is it more akin to the rapid restructuring of an environment thanks to the introduction of a non-native species?

The borough used to be in the national news for its racial tensions and violence. Then, things changed. Crime went down in New York. Thanks to its legacy of violence and large pockets of poverty, the rents in Brooklyn had remained low compared to Manhattan. Cheap rent attracts young artistic, creative people. They open shops and restaurants for their tiny community. If those do well, little communities develop around them and soon, more and more people move to be part of the emergent new community. It becomes, in real estate parlance, “hip and trendy.” This attracts the attention of business/investment. Looking to capitalize on the “coolness” of the area new owners buy property that the young creative folks still can’t afford; they invest and open nicer shops and expensive restaurants. More people move in. Soon, corporations come sniffing around. Suddenly, the whole neighborhood is changing. Rents are shooting up. The people who’d lived there for decades can no longer afford to live there.

Welcome to the business gentrification.

All of it is cyclical, predictable, and understandable. It’s not unique to Brooklyn. It happens all around the country. But what usually gets left out of the conversation, too often the displaced residents are people of color, who lose their homes to the hunt for hipness. And it’s painfully ironic that it’s the same reason their neighborhood was so cheap and dangerous for so long — money, specifically, city dollars.

Suddenly, there’s lots and lots of city money being spent to protect the investments of the new businesses, to make the new, wealthier and predominantly white residents feel safe, to educate their kids and keep their streets clean? The tax-base didn’t increase that dramatically. All the recent civic power and city funds being used to keep the sidewalks clean and roads clear for the engines of progress make it perfectly evident that Brooklyn is more valuable now that there are more white residents.

To answer the question posed by Biggie Smalls, “Where Brooklyn at?”

Brooklyn doesn’t exist on a county assessor’s tax report or realtor’s map. It doesn’t live somewhere inside a banker’s ledger. Brooklyn is a borough that lives in the hearts and dreams of the people who call it home. Those people are changing, which means Brooklyn is changing. And just like rap music, Brooklyn only became valuable once white people were buying it. Spike Lee wants to know why that it is. Maybe it’s time to start answering the question.

Zaron Burnett III is a social commentator and humorous essayist. He lives in Los Angeles.