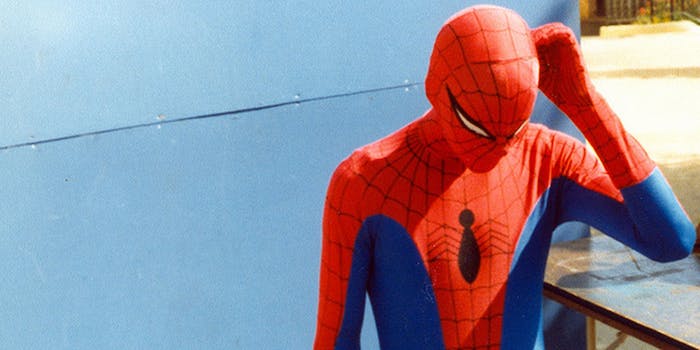 What Marisa Tomei's role says about the oft-criticized franchise.

You really can’t make this shit up, but thanks to the Internet, you don’t have to. According to Variety, Oscar-winner Marisa Tomei has landed the role of Aunt May in Marvel’s forthcoming re-reboot of Spider-Man, following the property’s acquisition from Sony. In June, it was reported that British actor Tom Holland would be the third Peter Parker since your friendly neighborhood Spider-Man swung his way into theaters in 2002. Holland’s casting was met with a shrug and a collective sigh on Twitter, but if early reactions to the Tomei news are any indication, Marvel may have bitten off more outrage that it can chew.

What’s troubling aren’t Tomei’s qualifications for the job—she has two other Academy-Award noms, and her win for My Cousin Vinny is more deserved than rumor suggests—but her age. At the time of her casting, Tomei is just 50 years old, 24 years younger than Rosemary Harris was when she first played the role in the 2002 original and 15 years younger than Sally Field when she filled Aunt May’s shoes—or rather, cardigan—10 years later. To further illustrate what a wide gulf separates Tomei from her predecessors, Tomei was born in 1964. Harris and Field were respectively born in 1927 and 1946. That is bleak.

Although the new Spider-Man series aims to portray a younger Spider-Man in his early high school days, with Marvel president Kevin Feige promising a John Hughes vibe, that’s not enough to account for Aunt May’s magically shrinking age. At this rate, an actress born in 1981—give or take—would have to play the character in the inevitable next reboot, which means that Alexis Bledel, Sienna Miller, Julia Stiles, Paris Hilton, Britney Spears, and Beyoncé would all be just the right age for the part. Don’t you think Paris Hilton would make a great Aunt May?

Of course you don’t, because that makes no sense—especially when the character is often portrayed as an Angela Lansbury type in the original comics. For an illustration, Google “Aunt May comics” and “Marisa Tomei 2015.” As Refinery29’s Esther Zuckerberg writes, looking at those sets of photos “brings to mind Inside Amy Schumer‘s ‘Last Fuckable Day’ sketch in which Patricia Arquette, Tina Fey, and Julia Louis-Dreyfus talk about how ‘in every actress’s life the media decides when you finally reach the point where you’re not believably fuckable anymore.’”

What’s sad about this is that it’s yet another indication of every sexist Hollywood stereotype when it comes to actresses of a certain age. In Mike Nichols’ The Graduate Anne Bancroft played Mrs. Robinson—the cougar mother of Dustin Hoffman’s love interest, despite the fact that she was just six years older than Hoffman; she was also just nine years older than Katherine Ross, her on-screen daughter. The mother of all examples, however, will go down in history as the curious case of Oliver Stone’s Alexander, in which audiences were expected to believe Angelina Jolie (29) gave birth to Colin Farrell (28). It’s a stretch, to say the least.

However, this isn’t just an issue of casting mothers but female roles in general. While men are allowed to age on-screen, their love interests aren’t—and it means that actors like Harrison Ford, Johnny Depp, and Denzel Washington have dated 20- and 30-year-olds their entire careers. In 1980, the 38-year-old Ford was knocking on-screen boots with 29-year-old Karen Allen in Raiders of the Lost Ark. Eighteen years later, he was still dating 29-year-olds in the movies—as Six Days Seven Nights co-star Anne Heche was the same age as Allen. Meanwhile, neither Depp nor Washington have been paired up with a woman older than 4o.

As a former Aunt May, Sally Field knows how bad this problem is better than anybody. In the mostly forgotten 1988 comedy Punchline, she’s Tom Hanks’ love interest. Just six years later, she was playing his mother in Forrest Gump. This is a problem that would plague her the rest of her career, stuck playing wives and mothers while aging male actors still got to play opposite Penelope Cruz, Angelina Jolie, Christina Ricci, and Keira Knightley. (Actually, all of those examples were still Depp.)

For anyone who pays even a passing amount of attention to the rampant sexism in the industry, this might seem like old news, but when it comes to an already unpopular reboot, it might be the straw that breaks Spidey’s back. After the disappointing casting of Holland let down those who had been holding out hope that the webslinger might look more like Miles Morales this time around (Donald Glover had long been a fan-favorite choice), an internal licensing agreement between Sony and Marvel leaked that specified Spider-Man has to be white and heterosexual—legally.

At this point, Marvel’s Spider-Man looks like more of the same for a studio that’s faced more than its fair share of criticism in recent months—both in terms of race and for its female superhero problem. For a franchise that was flying high after breaking box office records when Tobey Maguire first put on the mask, it looks like its own politics might be breaking Marvel.