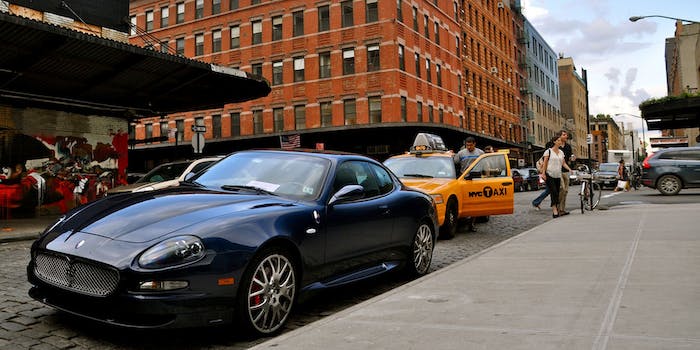 Uber alles: How a startup stands to make 2014 the year of the car

The hottest device of 2014 will not be a tablet or smartphone. It won’t be Google Glass and certainly won’t be a “smartwatch.”

The hottest device of 2014 will not be a tablet or smartphone. It won’t be Google Glass and certainly won’t be a “smartwatch.” It’ll be parked in your driveway.

Last year was one of the biggest years for the automobile since the invention of automatic transmission. Ford’s muscular new line of cars (particularly the best-selling Focus and Fusion) has officially reopened the American market in ways not seen since the rise of SUV’s and minivans in the ’90s.

The auto market saw something it’s really not used to handling in 2013: a hip, new startup. Tesla Motors, despite some bad press due to (mostly overblown) safety concerns, has made the electric car not only stylish and cool but a reasonable purchase for a middle-class American. And with its software-driven mechanical updates and charismatic CEO Elon Musk, Tesla is pulling attention away from the Great Lakes and into the Bay Area.

Tech giants as of late are betting big on car-integrated software. Google is set to unveil at CES next week a cross-promotional deal with Audi, syncing Android with the high-end vehicles in yet-to-be-announced ways. This is largely seen as a response to Apple, which, back in June, quickly cornered the market by inking a deal with seven automakers, from affordable automakers like Kia, Hyundai, and Honda to high-end rollers like Ferrari and Mercedes. Apple wants to design its own “infotainment” system in cars that connect to your iPhone or iPad, hopefully improving upon the clunky touch-screen systems already seen in many vehicles. (Ford’s is actually quite hard to use.)

No transportation story has been as astonishing as the very sudden rise of Uber. Operating in over 20 countries (up from just San Francisco two years ago), the ride-sharing app is ruffling some tough feathers among urban cab services en route to becoming the new business to watch. Google bet big on Uber (headed by ambitious CEO Travis Kalanick) back in August, when the venture capital arm of the search giant helped back Uber’s $258 million round of funding. The move put the new company’s valuation at roughly $3.5 billion.

Uber, far more than any of the names we’re used to hearing, has the ability to be the missing link in some of the tech world’s most enticing projects. Many have speculated that Google’s investment is a step toward its own self-driving cars. Just imagine hitting a button and an empty robot-car arriving at your door. Amazon, also an Uber investor, could easily convert Uber into a courier service for its much sought-after same-day delivery (a premise far more believable than quadrocopters).

As Kalanick told Wired, “We feel like we’re still realizing what the potential is … we don’t know where that stops.”

Not that Uber is any magical wunderkind. The foundation of ride-sharing itself rests on some rather shaky legal ground in cities where any payment for rides must be done by registered cabs and taxis. Paris—Uber’s largest market outside the U.S.—has passed a law requiring ride-sharing services to pick up a fare no less than 15 minutes after the ride is ordered; cabs will not have such a handicap. Authorities at San Francisco International Airport, meanwhile, have been arresting drivers for Uber and competitor Lyft as they pull up to the entrance.

Despite such drastic measures, it may be too late to stop Uber. As Kalanick told the NYC Taxi & Limousine Commission, “the genie is out of the bottle.”

There’s also the small issue of cost. Uber remains a higher-end service for urban elites. Even with the supposedly bargain-brand UberX (whereby drivers use their personal cars instead of the list of pre-approved cars), a nighttime trip across Manhattan could easily run you into a hundred-dollar fare. Unlike taxis, Uber’s rate is not set and fluctuates in real-time based on demand from passengers and supply of drivers. In fact, Uber felt the need to announce a surcharge for all rides ordered on New Year’s Eve, presumably in response to increased demand from tipsy revelers.

So if 2014 is to be the year of Uber, the company has some very real and tarnishing kinks to work out. But despite the (ahem) roadblocks in the way, travel-centric apps and companies stand a real chance to change not just the way we drive but the way we use our already-prescient gadgets.

Last year saw the rise of “the Internet of things,” an automated world of everything from TVs to pacemakers. As cars are brought into that list by Google, Apple, Uber, and others, the same technology that changed the way we talk and spend is set to finally change the way we move.