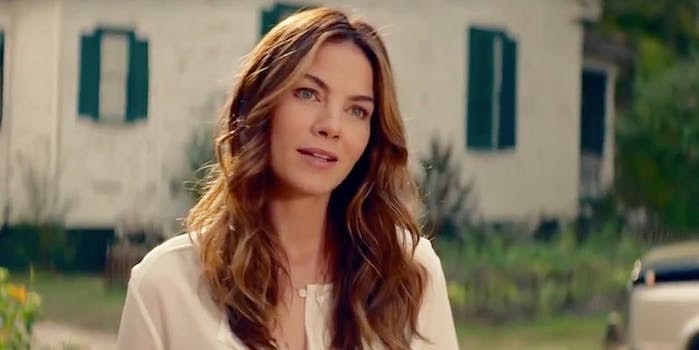 With The Best of Me debuting in theaters, it's time to answer the question the Internet has long pondered: Are all Nicholas Sparks movies the same?

Today, The Best of Me hits theaters nationwide, the ninth Nicholas Sparks adaptation to see release (and with two more in development, to boot). A Sparks adaptation has become as perennial and inevitable an event as the changing of seasons, giving appealing blond actresses and chiseled hunks paychecks for years now. The Internet has thrown continuous shade at Sparks’s novels and the movies based on them alike for the many similarities shared among every single one, and with The Best of Me, Sparks has actually doubled down, offering the same star-crossed lovers at two different ages for maximum tissue-clutching emotional impact, because sadness works best in bulk.

The following is an inquiry into the phenomenon of Sparks’ wide Internet hatred. Are the Sparks movies all derivative ripoffs? How many commonalities do they truly share? Let’s consider the many ways in which you know you’re absolutely, positively watching a Nicholas Sparks movie, no matter which one it is.

And lots of them. Like, so many of them. Sparks knows his demographic: predominantly female, often older, and typically Caucasian. The films made from his novels accordingly center themselves around white people and their white friends. A brief investigation into Sparks’ IMDb page suggests that most of the films have few to no actors of any ethnicity other than white prominently featured in them. In Message in a Bottle, the 1999 adaptation that kicked off Sparks’ filmic empire, not a single actor of color appears to be prominently featured, for example.

There have been major supporting players of color in some Sparks movies, such as Viola Davis’ turn in Nights in Rodanthe, but there’s yet to be a Sparks film with a romantic lead, or even a prominent baxter (more on that shortly), that isn’t as white as snow. 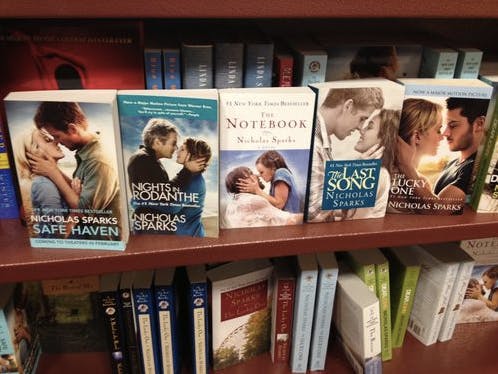 A subcategory to this is that when the kiss teased on every Sparks poster finally comes to fruition, it’s as passionate and intense and usually soaked in rain as kissing can possibly get. It’s all the built-up energy conjured by two J. Crew models exploding into a supernova that smells faintly of pumpkin spice.

In keeping with the quaint, traditional aesthetic of Sparks’s storytelling, almost all of his stories take place well outside of the urban sphere. Either people left their cities some time ago, were chased out, or have simply come to love the homespun wisdom that comes from living in a place where the nearby creek actually has a name.

Of Sparks’ nine adaptations, almost all of them take place in the South, and five in either North or South Carolina. Message in a Bottle is set in Cape Cod, the lone northern entry in Sparks’s canon, and both The Lucky One and The Best of Me plant their flags in Missouri. The Last Song took place in Georgia. This is essential considering that each of these movies involves at least one scene of somebody staring at water and/or a sunset in contemplation of something.

A baxter is a character in a film, usually either in a romantic comedy or a melodrama, that exists to keep the central couple apart, and is almost always disposed of in one fashion or another by film’s end. For Sparks, the baxter is usually an ex-spouse of some kind, or the specter thereof: Message in a Bottle concerns Kevin Costner’s inability to forgive his dead wife for dying, Safe Haven and The Lucky One both foreground an abusive ex-husband who menaces both his ex-wife and her new paramour, and The Notebook casts James Marsden in the unenviable role of a perfectly decent guy who has the shortcoming of not being Ryan Gosling.

In A Walk to Remember, however, the baxter is leukemia.

Nicholas Sparks never met a terrible twist of fate he couldn’t turn into multiple briefcases packed with unmarked bills, and so almost every single film based off one of his novels ends pretty terribly. Also, it’s mass spoiler time, so tread lightly if you intend to get around to Sparks’ oeuvre one of these days.

In Message in a Bottle, Kevin Costner dies at sea, offscreen, after leaving his beloved in a huff. Similarly, Nights in Rodanthe sends Richard Gere to Africa to reconnect with his estranged son and then die in a mudslide. Mandy Moore dies of cancer at the end of A Walk to Remember so that Shane West can “learn something” about the world, sort of like The Last Song, in which Miley Cyrus’s dad (no, not that one) kicks the bucket to affirm her leaving the South.

The Notebook allows its embattled lovers to die in each other’s arms, but not before Gena Rowlands has a devastating fit of amnesia and forgets her beloved. (Side note: That’s probably the single best, most powerful sequence in any of these movies.) Dear John and The Lucky One both give their couples happy endings, but only after the film’s baxters die, the latter film invoking a flash flood to make it happen.

In Safe Haven, Julianne Hough finally gets a great life with Josh Duhamel only after her ex-husband stalks her across the country, attempts to burn down a building with her and Duhamel’s daughter inside, and engages Hough in a struggle for a loaded gun that ends in her shooting and killing him. Also, her best friend in her new town was actually a ghost the whole time. Nothing in either of those sentences has been embellished.

Have you ever tried this in real life? Your mouth ends up filled with water, and it’s not as great as Sparks would have you believe.

Which basically means a lot of back caressing and gaping mouths. More often than not, it’s either during or immediately after a rainstorm, almost always after the couple has taken a long and meaningful walk together. (You could say it was… a walk to remember.)

This is the ultimate hallmark of the Sparks story: the operating principle that no love story is complete without somebody having suffered greatly beforehand. In addition to the recurring motif of the abusive ex-lover, The Notebook, Dear John, and The Lucky One all feature men who’ve served in the military as their tragic heroes. When centered around a female protagonist, she’s almost always an impossibly attractive outcast of sorts who feels adrift in her own life, and has recently become single in most cases. A Walk to Remember and The Last Song are the outliers here, but also the only films about high schoolers up for discussion. So, there are cruel jocks and jealous paramours aplenty.

9) The cavernous, whirring sound of money being printed, somewhere

Again, two more of these are on the way as we speak.

Photo via The Best of Me/YouTube