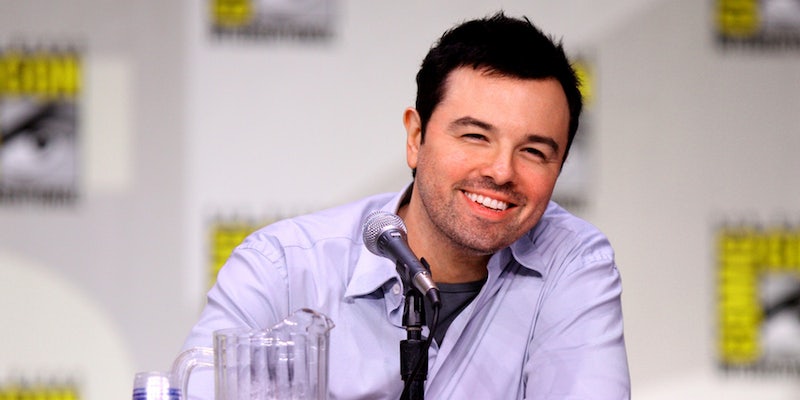 Just over a week ago, the Washington Post‘s Ann Hornaday ruffled more than a few feathers while discussing the possible influence of modern Hollywood comedies on the potentially disturbed human mind. In context of the recent massacre in Santa Barbara, Hornaday wrote the following:

How many students watch outsized frat-boy fantasies like Neighbors and feel, as [Elliot] Rodger did, unjustly shut out of college life that should be full of ‘sex and fun and pleasure’? How many men, raised on a steady diet of Judd Apatow comedies in which the shlubby arrested adolescent always gets the girl, find that those happy endings constantly elude them and conclude, ‘It’s not fair’?

Here’s the thing: Hornaday wrote that column a week too soon. Whereas there are arguments to be made for and against the Apatow school of thought (you could say that the man-children are forced to grow up before they can find meaningful, lasting love, or that women are held as a prize for them doing so, and this is arguably a different thread of discussion entirely), another movie quickly followed in the wake of Neighbors and UCSB and Ann Hornaday, one which completely proves her theories correct in hindsight.

Calling out Seth MacFarlane’s A Million Ways to Die in the West feels first like a glaringly obvious move, and beyond that like kicking somebody when they’re already down. The film debuted to only $17 million this weekend, well below the $52 million made by Ted upon its release two summers ago. Already it looks to be a major flop for Universal, particularly when that previous effort appeared to herald MacFarlane as a new force in film comedy.

But where Ted, for its faults, at least featured both MacFarlane’s best and worst traits as a comedian in one messy package, A Million Ways is chock-full of the latter, almost exclusively so. When the film isn’t using constant anachronisms as a means to inject the sort of humor MacFarlane’s made his fortune peddling into a setting that would seem ill-suited to it, it deals in the two ugliest things about his comedy at large: perpetual woman-bashing and an overwhelming sense of martyr-like male entitlement at every possible turn.

It makes sense that these traits would emerge in a filmic vehicle that smacks of overwhelming hubris at every level of its creation. Family Guy, MacFarlane’s flagship creation, has become known in its later seasons as a place where good taste goes to die, where jokes like the following can air on network television in the guise of edginess. If ever there was a time for a Trigger Warning (rape), this is it:

The inclusion of the above isn’t meant to be gratuitous, but rather an indication of what MacFarlane’s been up to on TV when most critical minds stopped looking some time ago. In Ted, aside from a few brief beats, he mostly had the good sense to temper his darker instincts for the sake of making a movie most people wouldn’t be embarrassed to admit they’ve watched.

With A Million Ways, though, there are gags involving child marriage and associated pedophilia, violent death of various outlandish kinds, a shooting gallery themed after runaway slaves, and a whole bunch of bits at the expense of every woman in the movie, particularly Amanda Seyfried’s “gold-digger.” Early into the film, she has the audacity to leave MacFarlane’s bumbling, unbearably smug protagonist and spends the rest of the film being shamed for not seeing what a nice guy he is.

That’s a loaded phrase, deliberately, but one that MacFarlane readily invites. In one of the film’s many allegedly emotional moments, Charlize Theron’s love interest is tasked with lending an empathetic ear to MacFarlane’s dejected monologue about how all women leave nice, hyper-intelligent guys like him for total jerks. (Seyfried, for her part, leaves him for Neil Patrick Harris’ foppish dandy, who’s the only tolerable part of the film.) Not only is Theron, an Oscar winner it should be recalled, tasked with playing the role of the “enlightened” hot girl who can see the value of an obnoxious cad, but she has to sell with genuine emotion MacFarlane’s referring to himself as a “good guy.”

The idea of the entitled male considering women a reward for good behavior has come under fire in recent years, and especially in the past week given Elliot Rodger’s horrifying manifesto. And while it’s reckless to claim that virtually any figure in popular culture could drive a disturbed mind to fatal violence, it’s hard to deny that MacFarlane has had the poor fortune of trying to stage a two-hour, Western-nostalgic apologia for he-man, woman-hating MRA rhetoric.

For instance, A Million Ways sees its females in three categories:

1) The aforementioned “cool girl,” the dweeb’s holy grail, who finds demeaning and condescending behavior hilarious and knows that he doesn’t really mean it, he’s really a nice guy.

2) Promiscuous women, handled as childlike creatures who everybody else can figuratively and literally pat on the head, as seen by Sarah Silverman’s doe-eyed prostitute.

3) Life-ruining bitches who leave nice guys for jerks and deserve to be unhappy and rejected for their arrogance (again, Seyfried, who gets maybe three dozen words to say in the whole film).

Returning to the notion of hubris as it relates to A Million Ways, the film’s fatal flaw among its legion of them is that it in no way sees MacFarlane’s character, the smarter-than-thou wannabe alpha male, as unlikable. When it tries, it’s for the sake of MacFarlane being self-deprecating, shrugging off any grievance that could be levied against him.

Strangely, that’s where the truth lies with his ugly, truly misogynistic piece of business. At one point he says aloud that “I’m not the hero. I’m the guy in the crowd making fun of the hero’s shirt.” It’s the most lucid moment in A Million Ways to Die In the West, the one split second in which MacFarlane seems to be aware of how unlikable a presence he makes.

But then it’s laughed off with a joke, because he’s not actually an insufferable tool. He’s a really nice guy.