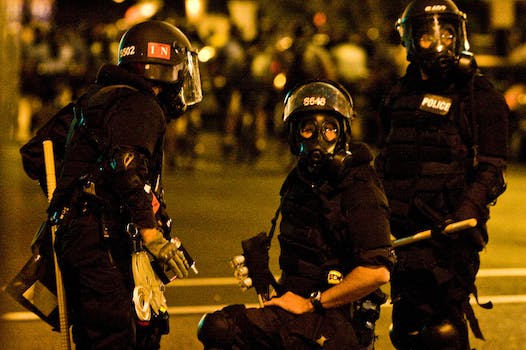 American cops have a huge problem, and it's not just the one you're thinking of.

In the wake of Ferguson and Eric Garner, Americans revealed a deep distrust for police, especially in the black community. The image, and the reality, of policing in the United States needs to make some radical changes if it wants to earn that trust back. Police agencies across the U.S. are desperate to avoid a repeat of 2014, even as the New York Police Department is busy being a stain on the entire law enforcement profession with its juvenile antics and “work stoppage”—an event with unintended benefits, perhaps to the dismay of the NYPD.

Law enforcement officials want to avoid headlines like those seen in 2014—and salvos like the direct shot across the bow fired by the New York Times—but they should know this is about more than a public relations issue. While police departments could attempt to fight the war with press conferences and public outreach, the tipping point has finally been reached, and New York actually provides a brilliant illustration of it. When a mayor who promotes police reform as a major part of his platform is elected in a landslide, as Bill De Blasio was in 2013, the message is being sent pretty loud and clear.

Reforming from the inside

This week, Sheriff Charlie Creel announced that two of the men, Undersheriff Trey Morrison and Detective Richard Moon, would be suspended without pay for their involvement in the thread. Morrison received a penalty of five days without pay for referring to protesters as “cockroaches,” while Moon, the deputy responsible for posting cartoons, received a suspension of two days without pay. Both men were placed on a six month probation. Three other officers, Sgt. Eddie Wester, Detective Rick Buckley, and Detention Deputy Jeff Carroll, did not receive penalties beyond the paid suspensions they received while the matter was under investigation.

Suspending the officers was a striking move, coming from a culture where police officers rarely face penalties for making racist remarks. In 2012, for example, an LAPD officer received minimal penalties for being racist, while another officer in Cleveland that same year similarly avoided significant penalties, this time for calling a suspect the “N-word” while on duty. This was also a radical departure from the department’s own history, as Moon had made racist remarks in 2009, when the department punished him with a five-day suspension and three-month probation, but made no other moves to address the issue. The tide may be turning against racist police officers—a pro-slavery cop in Cleveland was forced to resign earlier this year. The department didn’t stop with suspensions, either. Moon and Morrison were ordered to undergo diversity training, a valuable tool that should be required for all police officers, not just those who have been caught engaging in racist activity.

Tackling the culture at police departments may also require a healthy dose of unconscious bias training, a tool available in some corporate workplaces. John A. Powell, Director of the Haas Institute for a Fair and Inclusive Society at UC Berkeley, points out that racial anxieties and tensions can complicate interactions between people of color and police. While the efficacy of unconscious bias training is still nebulous, police departments are a good venue for testing the tool if it’s being deployed alongside other reforms.

De-escalation training is another policing tool that should be seeing more widespread adoption, with commentators noting that Michael Brown’s death might have been prevented if Darren Wilson had received more comprehensive training. One of the best working examples is that of mental health crisis intervention teams deployed across the country. Interactions between police officers and mentally ill people often go badly; specially trained teams can respond to crisis situations in a non-confrontational way to help mentally ill people access services while still addressing safety concerns. The basic training used for such teams can be extended to broader law enforcement situations, where the goal is to train officers to use a smart approach to force, in which hopefully a gun never comes out at all because the officer starts by trying to resolve a situation verbally.

At the Boston Globe, Gene Johnson and Eric Tucker address the growing calls for de-escalation training: “Proponents, including the Justice Department, say the approach can improve trust and understanding between police and residents, curtail the unnecessary use of force and improve the safety of officers and civilians alike.” In cities like Seattle, updated use of force policies are already in place, in some cases sparking resentments among police rank and file. Resistance to de-escalation training is another issue departments need to address to ensure that officers take it seriously and modify their behavior on the streets.

Creating a framework for public accountability

Pledging to make reforms from the inside must be backed with public accountability for police departments to escape from the albatross that was 2014. One obvious such example is the much-floated body camera or cop cam, which would allow for continuous recording of interactions between police officers and civilians. Cop cams are not without flaws, including the possibility of tampering with material, but they are a component of accountability, illustrating that departments are committed to changes in their use of force policies.

Shooting footage of interactions, some advocates argue, isn’t enough. They’re pushing for a return to community policing, a tactic once widely employed by police departments across the country, and one that’s being slowly picked up by cities as disparate as Lincoln, Neb., and Oakland, Calif. The approach requires getting to know the members of a community, working cooperatively with them, and familiarizing members of the police force with the people on their beats. Rooted in building ties on the ground level and encouraging designated areas of the city to work together on managing crime before police intervene, the model reduces crime and changes the relationship between police and the people they serve.

One very simple measure? Requiring police officers to live in the same neighborhoods they work in, making them part of the commons as well as law enforcement officers and creating a personal investment in community wellbeing. Community policing is a turn away from the militarization of American police, replacing people in kevlar behind riot shields with friendly members of the neighborhood. Radley Balko at the Washington Post takes note of another important element of community policing: ensuring that police forces are demographically and culturally reflective of their communities. Ferguson’s police force provided a stark example of what happens in a city where 67 percent of the population is black and over 90 percent of the police are white.

Nashville’s police chief, Steve Anderson, highlighted another aspect of public accountability: transparency, and supporting members of the community when they express grievances. When an angry member of the public wrote in to complain about the department’s compassionate treatment of protesters, he wrote a firm point-by-point response explaining why he felt no need to be aggressive with protesters who posed no threat to the community. In Richmond, Calif., the city’s police chief and his department didn’t just support protesters—they took to the streets with them.

2014 was a bad year for police interactions in America, and the issue goes much deeper than public image and whether members of the public trust law enforcement. Departments are painfully learning that lesson, and the tools for reform are laid out in front of them; it’s time for regional politicians, members of the public, and the Justice Department to force them to use those tools. As Mayor Bill de Blasio knows, departments won’t necessarily be thrilled by pushes for change, but police are clearly no longer capable of policing themselves.