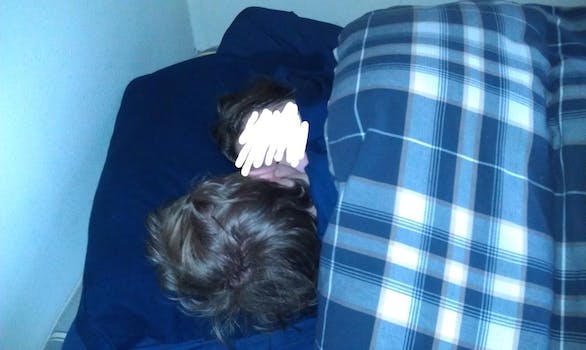 When I wrote about r/picturesofiansleeping last month, I called it a “weird little miasmic [bubble] of Internet culture.” The community, which features photographs of a guy named Ian sleeping, was a kind of modern-art experiment in Reddit form.

Now that bubble has been popped.

Ian wasn’t the only sleeping star, it turns out. His girlfriend, who the subreddit’s 4,000 fans called “+” (as in “Ian + 1”) made frequent guest appearances, along with an occasional used condom wrapper. Both Ian and his girlfriend, who are American college students, were enthusiastic participants in the community, even jumping into the comments section once-in-a-while.

But the girlfriend’s mother has found out about the arrangement and is much, much less enthusiastic than her daughter.

The sleeping party is over.

The unnamed matron allegedly threatened to sue both Reddit and Imgur, the site that hosted the files. Redditor whynotbeme2, Ian’s roommate and nighttime photographer, said the site’s staff subsequently deleted any links to photographs of the woman.

Erik Martin, Reddit’s general manager, confirmed that the site had deleted the threads “at the legal demands of her parents.“ According to Martin and whynotbeme2, the girlfriend was under 18 in some of the photographs.

But what was so offensive in the first place? This wasn’t amateur pornography. It was photographs of two people sleeping, with no nudity whatsoever.

The mother is just being a little protective of her daughter. Over-protective, some might say.

“I was eventually able to talk to the mom,” whytnotbeme2 wrote on Reddit, “and there is positively no way to convince her that her daughter is not going to be stalked, raped, and murdered and it is all my fault.”

Let’s be honest; those are some legitimate concerns. The Internet is a pretty creepy place. On a site as big as Reddit, there’s always a potential for real-world harassment.  And r/picturesofiansleeping’s whole artistic shtick is a silly commentary on those creepy, voyeuristic tendencies.

Still, I can’t help but think the reaction is entirely overblown. The girlfriend’s face was barely visible in most of the photographs. Usually she lay encased in a protective pile of blue sheets, sleeping peacefully. (If she has, say, a Twitter account, she’s exposing much more of herself publicly than anything she posts at r/picturesofiansleeping.)

The community, too, was in on the voyeurism joke. As far as we know, they’ve never been threatening or menacing in the slightest. It’s actually one of the friendlier communities on Reddit. Shortly after photogaphs of + disappeared, the subreddit’s fans mostly worried that Ian and his girlfriend had broken up.

“If this occurs, I hope that [r/picturesofiansleeping] isn’t a cause,” Jjjsixsix wrote. “Because that would suck. And I would feel guilty.”

“This would be devastating, honestly,” dotlizard added.

There’s no need to be devastated, thankfully. Despite the mother’s over-protectiveness, the two are still together and “very much a happy couple,” according to whynotbeme2, the roommate.

But for now it looks like r/picturesofiansleeping will be minus one plus.

And the experiment itself has lost its voyeuristic innocence. That may be the biggest travesty of all.