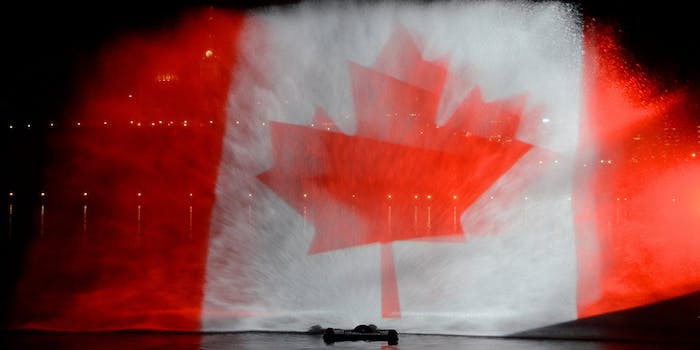 Here's why Internet financial pundits are freaking out.

Big news in the world of fast food: Burger King wants to change nationalities. The burger-maker believes life would be better if it was Canadian. (And really what American hasn’t thought that a time or two?) When the fast food chain announced its plans to buy Tim Horton’s, a popular Canadian coffee chain, and relocate their corporate headquarters across the northern border, the move was seen as a tax dodge and a way to increase its expansion strategy to take on rival McDonald’s.

But why did Burger King choose a Canadian company in particular, and why do U.S. firms snapping up foreign companies tend to focus on those in fellow Western nations?

The Wall Street Journal was the first to break this story, and most of the subsequent reports of the sale/merger depict the purchase of the Canadian coffee chain as an obvious strategy for Burger King to qualify for the lower Canadian corporate tax rates. The deal has been analyzed, debated, and commented on by media outlets such as Bloomberg View, Forbes, the New Yorker, Time, Fortune and the Washington Post, an issue on which they all generally agree.

For most of the online financial punditry, the real sizzle of the Burger King story centers on the hotly debated practice of corporate inversion—it’s a tax avoidance strategy wherein a U.S. company buys a foreign company, and then claims on paper that they’ve moved their headquarters. As a foreign company, they can greatly minimize their U.S. domestic taxes and enjoy the benefits of a much lower foreign tax rate. Imagine if you could get a post office box in Ireland and then tell the IRS you’re Irish, because that’s where you get your mail. It’s the corporate version of that.

President Obama has been rather vocal about this issue, dating back to his days as Senator Obama. “I don’t care if it’s legal,” he said at a recent speech in Los Angeles. “It’s wrong. You shouldn’t get to call yourself an American company only when you want a handout from the American taxpayers.”

Of course, Burger King insists tax avoidance isn’t the reason for their move to Canada. Some analysts agree, suggesting the real reason for the move is breakfast. Compared to their rival McDonald’s, Burger King does not perform well in the morning. They’d also like to compete with Warren Buffett of Africa”:

U.S. firms still think ‘about Africa a decade ago… whereas things have really changed dramatically… Africa now has been growing at about 5.5 percent on average in the last decade… There is a lot of perceived risk. People only talk about risk. But the majority of those who perceive risk don’t know the story. They have not really been there.

Is this perceived risk the same reason why all recent tax inversions send U.S. companies packing for places like Ireland, the U.K., or Canada? Would investors lose confidence and punish a pharmaceutical company for moving to Lagos? Would it be scary for customers and investors if Burger King wasn’t moving to Canada and instead the American fast food chain moved to Dubai? Would that make the loss of the famous American brand of burgers feel more devastating? What if Burger King relocated across the border to our southern neighbor, Mexico? If U.S. companies start running to the developing world, would that make their desperation to hide profits look even shadier? Is this why they prefer to do a Double Irish with a Dutch Sandwich, because the money stays in “the family,” so to speak?

Conservative think tanks have suggested the reason a select number of countries are targets for inversion is simple: Places like the U.K. offer safe and stable financial institutions and a well-regarded legal system. However, this argument fails to explain why the Cayman Islands, which have historically been considered a great place to park profits, are not a place to invest capital. As we witness more U.S. companies executing corporate inversions, the pattern only becomes more evident: Profits get invested if the foreign countries tend to be regarded as white, rather than tan. You hide money in the former colonies of the Caribbean. You invest in the islands of the U.K. or Canada.

Tax haven nations like the Cayman Islands or Bermuda seem like perfectly fine places for U.S. companies to park their profits. But they’re never the sort of countries where U.S. companies invest their profits. Instead, corporations treat the Caribbean like banking colonies. And it’s no different for Ireland (historically financially dominated by Britain). Despite the fact the corporate inversion tax cheat is often called “The Irish Inversion,” the country that lent its name to the tax avoidance scheme has little to show for it. Welcome to the wonderfully racist and typically classist world of corporate tax avoidance.

You may recall the controversy around Dubai Ports World. Despite President George W. Bush’s support for the Arab-owned business, the company was pressured into selling their American holdings based on fears that an Arab multinational controlling American ports was a “national security threat.” Regularly, the U.S.government attempts to block mergers between American and Chinese companies, often citing a “national security threat.” Canada has done the same to Chinese companies. In the instance of a possible merger of telecom companies, both U.S. and Canadian governments were afraid the Chinese telecom companies would allow the Chinese government access for espionage purposes.

There is no great “national security threat” over cheeseburgers and vanilla lattes—and no chance of foreign special sauce espionage. So, why not buy a Chinese fast food chain if you’re looking to grow? It seems like the assumed risk of dealing with Asian and African businesses is a legacy of American and European racism, more than a financial consideration. China, by the way, doesn’t seem to have this problem and is more than willing to do business in Africa, and other nations the U.S. turns its nose up at are doing the same. Business practices like these could just be how the U.S. loses international credibility in the 21st century.

Image via chichacha/Flickr (CC BY 2.0)