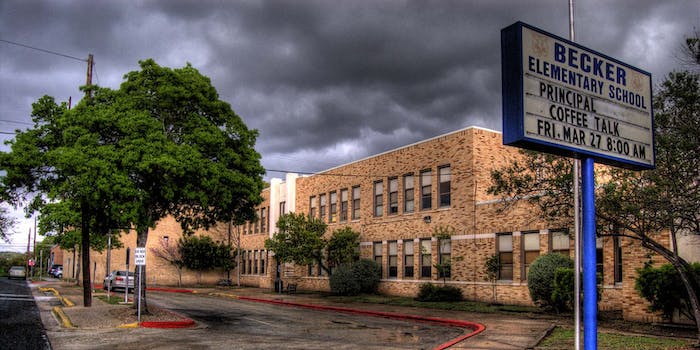 A new company could be buying and selling your kid's information.

A recent acquisition by an equity firm could be putting millions of school age students’ data at risk. PowerSchool, the classroom management software used by 15 million students, was sold last week by educational software firm Pearson to Vista Equity Partners, a company specializing in supporting companies that provide enterprise software for industries as varied as real estate, college sports, and agriculture.

While not so concerning on its own, this means PowerSchool—and all the student data it owns—is now in the hands of a company that has failed to join the 153 education companies that have pledged to not sell student data or use targeted advertising toward students.

The slow creep of private software companies into public education has accelerated enormously since PowerSchool was first founded in 2000. According to Education Week, public schools in the U.S. spend over $3 billion providing digital services to their students. Some, like Code.org and Kahn Academy, offer individualized tutoring to help take the load off of overpopulated schools. Others, like Google, have offered their own free versions of expensive digital tools such as Microsoft Excel and Word.

The danger inherent in the purchase of PowerSchool is that its own massive trove of student data could likewise be sold as a commodity for marketers instead of being used to better improve PowerSchool’s services.

Of course, nine out of ten American teenagers use social media, so it’s safe to say much of our kids’ personal lives is not completely private from making software companies very, very rich. School data, however, often contains very specific information about grades, medical needs, and even disciplinary records. Companies being trusted with this information need to be held to a higher standard than the one we’ve set for Facebook, Snapchat, Google, and Amazon.

This means PowerSchool is now in the hands of a company that has failed to join the 153 education companies that have pledged to not sell student data or use targeted advertising toward students.

In lieu of student data being monetized like your Facebook activity—harvested and sold to better target advertisements—most major ed-tech companies have signed the Student Privacy Pledge, a promise to not sell student information, to keep strict security standards on the information they do collect, and to never subject students to data-driven advertising.

The Pledge, announced last January by the Obama administration, is partnered with the proposed Student Digital Privacy Act. The SDPA would restrict all companies dealing in the educational data of K-12 students from treating said information as a commodity and not as a method to provide students with a better education.

There has been a push in recent years for big data to help educators better serve their students. Mass analytics, say proponents, could help teachers use software to find how they might better assist them in much the same way Google or Facebook compares the actions of its users to help them provide their service.

“The time is right for K-12 schools and districts to move beyond a simple focus on generating statistics and reports that are viewed once, then put away and forgotten,” writes the Center For Digital Education. The CFDE believes the data collected by companies like PowerSchool can put to a “positive, constructive use that will lead to better instructional performance and learning outcomes.”

Our current privacy standards for such data collection, however, is woefully behind where it should be. The current law managing such collection, known as the Family Educational Rights and Privacy Act (or FERPA) was gutted in 2013 to allow for third parties not involved with education to purchase data collected for education. The SDPA hopes to change that.

One such company that peddles in student data is American Student List LLC. ASL promises its marketing clients “unparalleled access to an attractive demographic: teens, college students and their parents” through “college and scholarship searches, contests, promotions, and sweepstakes [which] results in perpetual growth of names.”

In short, ASL and companies like it are buying the data of students from surveys given to students under the guise it will improve their education.

Many of these companies come close to fraud when collecting student data. ASL, for example, uses a company known as National Research Center for College and University Admissions, which administers surveys to students to better connect them with the colleges they might like to attend.

As the Wall Street Journal found in its investigation of the company, National Research does the bare minimum to notify students and teachers of their intentions. When WSJ contacted the president of the company, he cited a privacy statement which stated surveys would be “used by colleges, universities and other organizations to assist students and their families.” He even justified the brevity of the disclaimer by saying teachers are “too busy” to read a more detailed account of how the data is used.

Our current privacy standards for such data collection is woefully behind where it should be.

Another company, sponsored by the Bill & Melinda Gates Foundation and News Corp’s Rupert Murdoch in 2013, closed down last year after privacy advocates fought against its use in public schools. InBloom, a data-driven software venture bent on “personalizing” school for each individual student through data mining, closed down after a public outcry over its practice of keeping student data in Amazon’s cloud services.

As privacy advocate Diane Ravitch pointed out when InBloom was still live, states partnering with the company were holding it to a thin privacy standard compared to the expectations of school faculty. “On the cloud will be students’ names, addresses, grades, test scores, disability status, attendance, program participation and many other details about students that teachers and schools are not allowed to release,” Ravitch wrote.

With such companies eager to sneak their way into the mines of data currently being hoarded by companies like PowerSchool, it’s very worrisome when a company already entrenched in public schools is sold to an equity firm that might have less than the best interest in preserving student privacy.

The good news is that parents are wary of these companies even if they’re overall optimistic about the use of technology in schools. In a recent survey, 71 percent of parents spoke in favor of educational technology, but 79 percent expressed concerns about their kids’ privacy. Our children are already the products of an education system run by technology—let’s make sure they don’t become a product for advertisers.

Photo via joey.parsons/Flickr (CC BY ND 2.0)