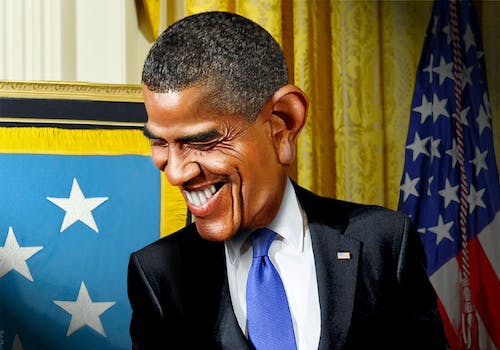 When a conspiracy theorist is invited to write op-eds for a major news site, you're bound to wind up with a few racist comments.

We already know that it is extremely dangerous to be a black man in America—and that the president of the United States is no exception, as we have discovered in the wake of the recent scandal involving the Secret Service that shook up officials all the way to the top. The very organization charged with the protection of Barack Obama seems to be struggling with even basic safety procedures, as commentator Ronald Kessler recently discussed for Politico in a piece that couldn’t resist an assassination hook as a click-baiting enticement.

His piece, on the flaws within the Secret Service and the need for immediate reforms, contained a chilling final line: “Agents tell me it’s a miracle an assassination has not already occurred. Sadly, given Obama’s colossal lack of management judgment, that calamity may be the only catalyst that will reform the Secret Service.”

The implications were clear: The only thing that would reform the Secret Service would be a presidential assassination, yet if such a horrific event occurred, the president would have no one to blame but himself. Whether threats against the president have increased or not (a matter, it may surprise you, that is actually one of debate), one thing is certain: We have witnessed several high profile attacks against the president and his family during his time in office.

Dept of WHAT??? @Politico: Only thing that will fix the Secret Service is Obama’s assassination: https://t.co/61f1hCdhiT

@Politico, you are sick, disgusting, and despicable scumbags for fantasizing about President Obama’s assassination. pic.twitter.com/Zsqp2xXi21

The line has since been replaced with a note from the editors of Politico:

Editor’s note: Some readers have misinterpreted the original last line of Kessler’s article as somehow suggesting that the president should be held responsible in the event of his own assassination. That couldn’t be further from the truth, and we’re sorry if anyone interpreted Kessler’s meaning in any other way.

The apology strongly resembled other fauxpologies from news agencies eager to blame valid criticism on their readers, instead of their editors. “Sorry you feel this way,” say the editors of Politico, dusting their hands of the matter. It’s almost a textbook example of how not to apologize, both refusing to acknowledge entirely valid readings of the line and insulting readers who considered the line in the racially-charged context of U.S. politics.

… so is everyone wrong but @politico? No. Can’t use assassination for the clicks then claim readers “misinterpreted” your words. We didn’t.

Politico’s defense of the line is particularly perplexing when one considers the fact that the piece was written by a man whom Media Matters for America describes as a “discredited gossip-monger.” Surely a media organization would want to check on the credentials of a commentator, especially on such a sensitive issue, before running a piece. Editors might also want to carefully consider the loaded implications of a comment suggesting that the President would be to blame for his assassination, because the implication lay not just in the final comment, but in the piece overall, which repeatedly chastises Obama for failing to rein in the Secret Service.

The answer to Poitico’s smug attitude about the piece lies, at least in part, on the race of the subject. We are not talking about a white president, and one wonders if such a line would ever be used about a white president—even one notoriously unpopular in polls, such as George W. Bush. While the line was clearly not intended as a threat, it definitely left readers with a sticky and unpleasant sensation, and yet another reminder that this is a nation where men of color are blamed for their own position in society. Just as there are those who rushed to blame Michael Brown for his own death, so too did Kessler suggest that President Obama would be responsible for his own death in office.

While Presidential assassination is always a threat looming in the minds of Americans, it took on a particularly acute tone when thenSenator Obama began his campaign. Rightly so; many Americans are aware of the looming racism that pervades American life, and predicted that a Black president would cause an uproar in white supremacist and some conservative circles.

In a 2007 interview, Michelle Obama was asked about her concerns should he be elected president, and whether she had asked him to consider stepping back from the campaign. Her words were as chilling as Kessler’s, in their own way: “Michelle replied that the dangers of the Presidency were not novel. ‘I don’t lose sleep about it,’ she said. ‘Because the realities are, as a black man, you know, Barack can get shot going to the gas station.’”

There is something both acutely accurate and acutely depressing about her resigned comment on the matter, reflecting the fact that Black men across the United States are in danger simply for existing, as we were reminded of most explosively this year in Ferguson. Setting aside homicide risks overall, white police officers use lethal force against black subjects an estimated two times a week in the United States,

We live in a world where black sons (and daughters) are given “the talk,” which has nothing to do with the birds and bees and everything to do with how dangerous the outside world is, how police officers are not always friendly and how an innocent walk with a bag of Skittles can turn into a tragedy. As Jazmine Hughes writes in Gawker:

Every black male I’ve ever met has had this talk, and it’s likely that I’ll have to give it one day too. There are so many things I need to tell my future son, already, before I’ve birthed him; so many innocuous, trite thoughts that may not make a single difference. Don’t wear a hoodie. Don’t try to break up a fight. Don’t talk back to cops. Don’t ask for help. But they’re all variations of a single theme: Don’t give them an excuse to kill you.

In the face of this landscape, a comment like Kessler’s is not occurring in a vacuum. It reinforces existing frameworks and understandings of black male America, implying that if our nation’s first black president is killed in office, he’s only getting what’s coming to him. It also sends a clear signal to Americans, that the life of a black man is still worth less, even when he’s occupying the highest office in the land; he may be our commander in chief, but he is still, at the end, just a black man.

Members of the black community grow up surrounded by the narrative that they are to blame for the violence they experience. It is not at all surprising to see the same attitude applied to the president of the United States, though it is revolting. It’s particularly disgusting to see it advanced on a major news site, one where editors should be proceeding with caution when it comes to discussing racial issues—because, make no mistake, the assassination of the President of the United States is a racial issue.

Photo via DonkeyHoty/Flickr (CC BY 2.0)