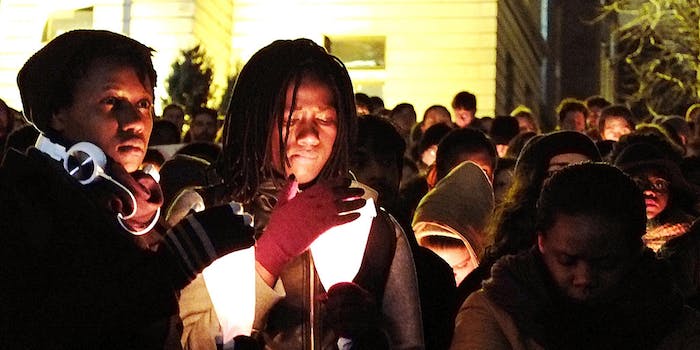 Is this the next Ferguson?

Antonio Zambrano-Montes' death might remind us of Michael Brown, but there are key differences.

An all-too-familiar story is once again making headlines. Police kill an unarmed civilian—authorities release a statement justifying their lethal force, but their story doesn’t add up when the video comes out. People take to the streets in protest, demanding justice.

The shooting of an unarmed man named Antonio Zambrano-Montes by police in Pasco, Wa., is already drawing comparisons to Ferguson. When a video surfaced showing Zambrano-Montes running away from police before he is shot down in the street, officials started to worry they may soon have a situation on their hands. Franklin County Coroner Dan Blasdel said it himself: “We don’t want another Ferguson here.”

Wow i finally watched the #Pasco video on #Univision NY. Will it be the next #Ferguson? Tough to say whether #Latinos will organize 4 this.

There are certainly similarities—but the Internet may be too hasty in calling Pasco “the next Ferguson.” The killing of Zambrano-Montes is only one of the latest instances in a national epidemic of police brutality that started long before Darren Wilson killed Michael Brown. While Ferguson, Mo., and Pasco are poor communities of color patrolled by mostly white police forces—a common statistic in urban communities that creates tension between overseers and citizens—each locality has its own specific context.

Residents of Ferguson consistently cited the stomach-churning experience of watching Michael Brown‘s body lay in the middle of the street for four and a half hours after he had been gunned down by Darren Wilson as a major driver of their anger. In the hot August sun, his body was left uncovered and had already begun to decompose before police took him away in a police van—not an ambulance. The visceral memory of the disrespect done to Brown’s body fueled powerful emotions in asserting that “black lives matter” and gave backing to the charges of a racial bias among Ferguson police.

A report from local radio station KUOW cited Zambrano-Montes’ cousin, Maria Madrigal, who alleged that after police shot him on a busy street in Pasco, his body was left there overnight while officers conducted an investigation—but so far, those claims haven’t caught fire.

The police’s swift and heavy-handed response in Ferguson made headlines and drew the nation’s attention to the unknown suburban township just a few miles outside metropolitan St. Louis. Residents came out spontaneously on the day Michael Brown was killed, and witnesses reported that police instigated the stunned crowd’s anger using dogs and racial slurs. The next day, police were already deploying riot gear and tear gas.

Dontey Carter, a resident and regular at the demonstrations, said that at the beginning of the Ferguson uprising, “It wasn’t a protest. It was just rage.”

Within days, pictures and video were circulating the net of heavily armored police lobbing tear gas and concussion grenades at civilians and journalists on suburban streets. Within a week, the National Guard was called in, as media flocked to Ferguson to witness the militarized police crackdown that looked more like Iraq than Missouri.

Even as they continue to grow, Pasco’s protests have looked nothing like Ferguson’s so far in the first week and don’t appear to be headed in that direction. Where riots were the voice of Ferguson, Pasco’s demonstrations have been completely peaceful. As chants of“¡Queremos justicia!” filled the air following Zambrano-Montes’ death, his family has said they aren’t interested in protesting.

“We did what we wanted to do on Saturday [where 700 people showed up], and it was very peaceful like how we wanted,” Marta Zambrano, aunt of the deceased, told Fusion. “But as far as anything else, we are concerned with trying to get his body, and praying the rosary right now. I don’t think we’re going to get into those other things because that’s what the investigation is about.”

The Pasco shooting does benefit from a video that Ferguson did not have, which clearly shows Zambrano-Montes running away from police before they shoot him multiple times. The benefit of video evidence may make for less debate than in Ferguson, where speculation on both sides drew out a long and heated debate over what happened between Darren Wilson and Michael Brown.

Protests in Pasco have taken on a markedly more subdued tone than those in Ferguson. Though demonstrations calling justice in Zambrano-Montes’ killing have drawn crowds, the rhetoric and gatherings have taken place at churches rather than the street. Protesters in Pasco held up signs like “Shoot me in the leg, but don’t kill me,” while Ferguson’s tone decidedly targeted systemic injustices by the police as a whole.

Investigative reports by Al-Jazeera brought to light the systemic targeting of poor residents in Ferguson with low-level traffic violations and fines to pad the city’s budget, which drove resentment of the oppressive authorities. Unimpressed by promises of reform, protest leader Johnetta Elzie reflected the movement’s defiant stance by saying: “The whole damn system is guilty as hell.”

But Pasco does have its own troubles that make it unique from Ferguson. Surrounded by vineyards, wheat fields, and farm land, Pasco’s economy is driven by Washington’s growing wine industry, which thrives off cheap migrant labor. Zambrano-Montes, who emigrated from Mexico over a decade ago, had worked in the nearby apple orchards, and according to family members, had been laid off recently after suffering an on-the-job injury.

Latinos make up 56 percent of the population in Pasco, yet are politically underrepresented in local government. Washington state election laws draw candidates “at large” rather than by district, making it difficult for minority candidates to get elected, and leaving Latino-majority communities unrepresented.

Pasco Police Captian Ken Roske said the town’s police force is 20 percent Latino, and many speak Spanish fluently. This would mark a significant difference from Ferguson, whose population is over two-thirds black, yet has only three black police officers.

Not every questionable killing by the police goes down in history like Trayvon Martin or Michael Brown. There’s a strange alchemy to the unjust police killings that go viral and become social movements. Hashtags play a big part, and calls for justice gain momentum when the hacktivists get involved. When the protests don’t let up, the media attention snowballs, and soon the bodies in the street start to leverage some real power to pressure authorities to respond and take action.

Yet there are so many examples that, for one reason or another, never garner national attention.

Antonio Zambrano-Montes did not have to die. His family deserves justice, as do the victims in the many other cases where police act as judge, jury, and executioner. No one should have to die in fear, at the hands of those who are sworn to protect them, especially those who don’t pose any imminent lethal threat to anyone. Throwing rocks, as Zambrano-Montes did, should not mean an instant death sentence in a country that calls itself a democracy.

Unjustified as it is, Pasco is not Ferguson. Comparisons may note the similarities in order to summon attention to Zambrano-Montes’ case but should be made with caution and an eye to historical context. Making Ferguson synonymous with every police killing glides over the differences in the histories of blacks and Latinos in America and risks framing the events in a narrative where police, like Darren Wilson, will inevitably walk free and continue to kill with impunity. Hashtag fever can cause cultural amnesia of all the Fergusons that came before.