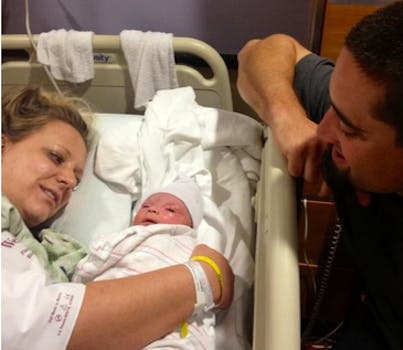 Love and agony: The brutal times of pitcher Pat Neshek

The devasting highs and lows of Oakland Athletics pitcher Pat Neshek's personal and professional life played out on Twitter this week.

Neshek thought about his Tommy John surgery, the inventive elbow ligament reconstruction procedure that sent his 2009 season into a tailspin. And he thought about the failures—the times he “thought it was over.” He was 32 and had only pitched in 174 major league innings. He knew about failure. He knew about despair. Four rounds through the minor leagues and a year off for the injury. He’d been there before.

Neshek tweeted those thoughts Tuesday morning at 1:46am.

“Makes this the sweetest playoff birth of my career!” he wrote.

His tweet came with good cause. The Athletics, a team that trailed the vaunted Texas Rangers by 13 games as recently as June 30, had just clinched a wild card playoff berth and sat one game behind first with two games to play. Both of those games were against the Rangers, who had led the Athletics’ division for most of the year. The Athletics could steal the pennant from Texas. They just had to beat them.

Making matters more grandiose was the fact that Neshek’s wife Stephanee was nine months pregnant with the couple’s first child.

“It’s a good day when you’re 39.5 weeks pregnant and you get a text from your mother-in-law saying she’s bringing a giant veggie burrito over,” Stephanee tweeted in late September.

On Monday she was well on her way through 40. That little veggie burrito in her belly was about to burst.

Stephanee went into labor at the same time that Neshek stayed up thinking about his career. He received word a few minutes after tweeting about his walk down memory lane. It was 1:48am. #playoffbaby

Neshek flew from Oakland to Florida to be by his wife’s side during labor. A few hours later, Stephanee posted a message to Twitter.

“It’s a boy Gehrig John Neshek,” she wrote. They’d named their son Gehrig, a nod to the great New York Yankee who contracted a debilitating muscle weakening disease and died at 37.

“Pat flew from Oakland to FL just in time for birth!” 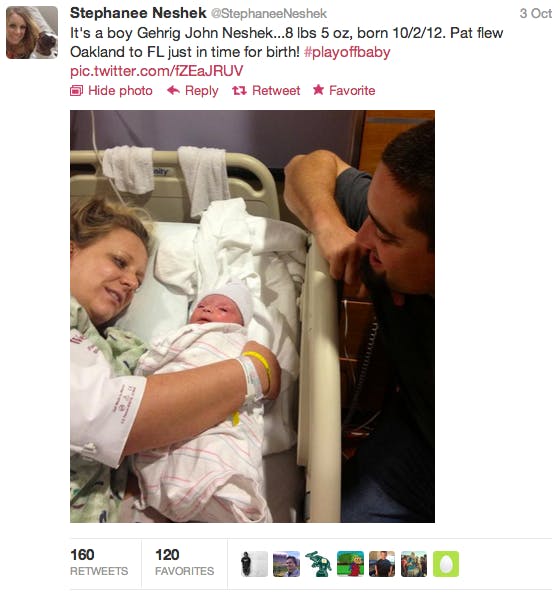 Meanwhile, Neshek’s Athletics were hot and getting hotter. They came from behind to beat the Rangers 3-1 on the day that Gehrig was born, bringing the two teams to a tie on the last day of the season.

Neshek stayed in Florida to watch that game with his wife and newborn son. The Athletics took the pennant nine innings later.

A jovial Stephanee corresponded with fellow Athletics’ wives throughout the day, telling Amanda McCarthy and Kaycee Sogard that she was “so bummed I missed this.”

“Such an exciting couple days wow!” she tweeted to Sogard.

The Neshek family was at an all-time high. That’s when the unthinkable happened.

Condolences began to flow in—from players and their wives, fans and press members. Stephanee took to Twitter to address each individual Thursday morning.

“I am still in complete shock over the loss of our son, after he was on this earth for less than 24 hrs,” she wrote. “He was perfect in every way and I loved him so much!

“I am at a loss for words right now… he died peacefully sleeping in my arms unexpectedly without any explanation.

“There was no cause of death and I am having trouble understanding why God can let such a thing happen [to] an innocent being. Thank you everyone for your thoughts and prayers. Every kind word helps.

“It makes my heart feel better to know how many people cared about Gehrig and are thinking of us during this difficult time.”

Neshek’s Athletics open their American League Divisional Series Saturday evening in Detroit. Thousands of fans across the Bay Area will tune in to see what their upstart squad can do against Miguel Cabrera and that powerful Tigers team.

Back in Florida, the Nesheks may watch, or they may not. The two know that it’s a wonderful game, but in the end, it’s only a game.