2013 is the year that sports watching will fundamentally change for fans. Bob Morgan, CEO of Sportstream, tells us about the major trends we can expect to see.

For more than half a century, the watching of big, traditional sports remained largely the same: a broadcast, two guys talking up play-by-play and colorful commentary. Talented broadcasters, sometimes revered by fans, called the games—but still, it made for a pretty limited perspective.

With the advent of new visual technology, televised sports began to add some bells and whistles. Flashy stats and infographics, superimposed visual cues, super hi-def instant replays and even dancing robots now fill our screens. But one thing still hadn’t changed: fans either saw the game live or they listened to the game as interpreted by sports commentators in the game’s broadcast.

We’re now entering an era where that element of sports watching is dramatically changing. The viewing of sports is becoming much more interactive and social. 2013, I predict, will be the tipping point. Call it The Year of Social Sports, because most people watching games—either live, on TV or streaming online—will also be interacting with a second screen at the same time. And this doesn’t mean just checking scores, Googling sports trivia facts or half-watching another channel.

What it means is the new sports viewer is augmenting his or her experience with a wealth of commentary and useful data from friends, other viewers and literally thousands of sports professionals weighing in on the action. That second screen will be a site of technology innovation, making the sports-watching experience not just markedly different from former passive viewing, but better. We all know there is massive chatter online during games, but 2013 marks the moment it gets organized, richly produced, pervasive across our screens and sold in all new ways.

If that technology continues to change, what will the impact on the entire culture of sports and sports fans be? What can we expect? Here’s what I believe we can look forward to in the Year of Social Sports:

1. The Rise of the Social Stream

The social stream has fast become a fan favorite when it comes to sports consumption. 83 percent of sports fans say they check social networks while watching games, and they are weighing in on the action in record numbers.

Fans almost always watch sports in real time. Passion is high; they don’t want spoilers and enjoy the sports bar camaraderie of watching games with friends. Plus, many fans have bets riding on games and fantasy league bragging rights on the line. The social second screen leverages these extra activities and heightens the fan’s experience when presented the right way. Social media allows people to share these experiences even with those who are far away. It also gives them access to highly relevant information (like up-to-the-second sideline updates, fantasy player updates, behind-the-scenes pictures, real-time highlights, alerts to other hot games and more) as the action unfolds. 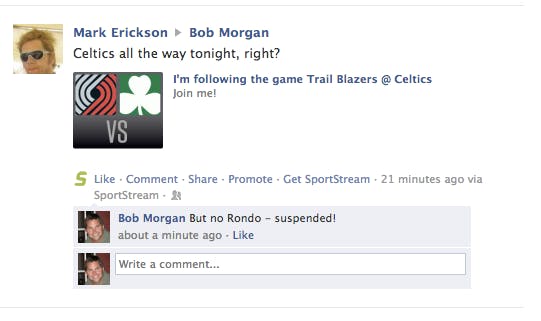 Sports broadcasting gets a whole new level of commentary—one that is interactive, personal and immediately responsive. Fans have an appetite for data, analysis and commentary, more than can be met by traditional outlets and which the social stream easily can by providing info while experiencing the game socially. This trend has been underway since social networks sprang onto the scene, but to date, it meant fans jumping between various sites and apps or sifting through a multitude of status updates to get the good stuff. This is the year it will become easy for fans to both enjoy the game and the conversations about it around them—a more cohesive experience.

For many fans, connecting with their favorite star athletes is the ultimate dream. From autographed jerseys and balls to trading cards, idolizing particular athletes is the stuff of pure sports fandom. Social media has made that direct interaction, once only possible if you were a VIP, feel far more tangible. Twitter is the obvious leader in allowing sports figures to interact directly with fans: to see their own thoughts and updates, follow their lives, tweet back and converse. But the methods and creativity for fan-player interaction are quickly expanding beyond Twitter.

Take Kobe Bryant as a great example of an athlete who grasps the power of social media. With more than 14 million fans on Facebook (and over 800,000 Twitter followers in 10 days), Bryant has tapped into a world of viewers who want to engage more directly with a player they idolize. He often posts longer form personal notes and photos on his Facebook page, allowing fans to feel more closely connected.

One of the breakthrough moments here in 2012 was when Brad Keselowski tweeted about a fire on a NASCAR track from inside his car. This moment riveted legions of fans. Many other athletes are extending their social media presence beyond Facebook and Twitter to other types of media: Instagram for photographs, Tout for short videos, Google+ for Hangouts with fans and Egraphs for personalized messages to fans.

In 2013, we will see many more athletes driving fans to “follow” them and finding new tools to engage, further putting the athlete at the center of managing their own brand. Twitter handles, Facebook pages and athlete-specific hashtags will become more mainstream in their sponsorship deals, PR and perhaps even on their signature shoes and apparel. Why wouldn’t Nike put out the @KingJames model of the LeBron X+ shoe and integrate a campaign encouraging fans to connect with LeBron and the new kicks?

All of this does one simple thing: connect players more deeply with fans. Fans want direct access. And athletes, agencies and brands that recognize the importance of this and foster it will be rewarded with increased loyalty, likely translating to more (and better) deals and merchandise sold.

The second screen doesn’t only benefit and enhance the viewer’s experience. It’s also a powerful opportunity and tool for advertisers and brands. 2013 will see advertisers delivering more interactive experiences through the second screen and mobile devices: smarter, more interesting, less passive advertising. Just look at what Pepsi is doing for the Super Bowl—inviting fans to upload photos and videos to use in a montage on TV during the big game. 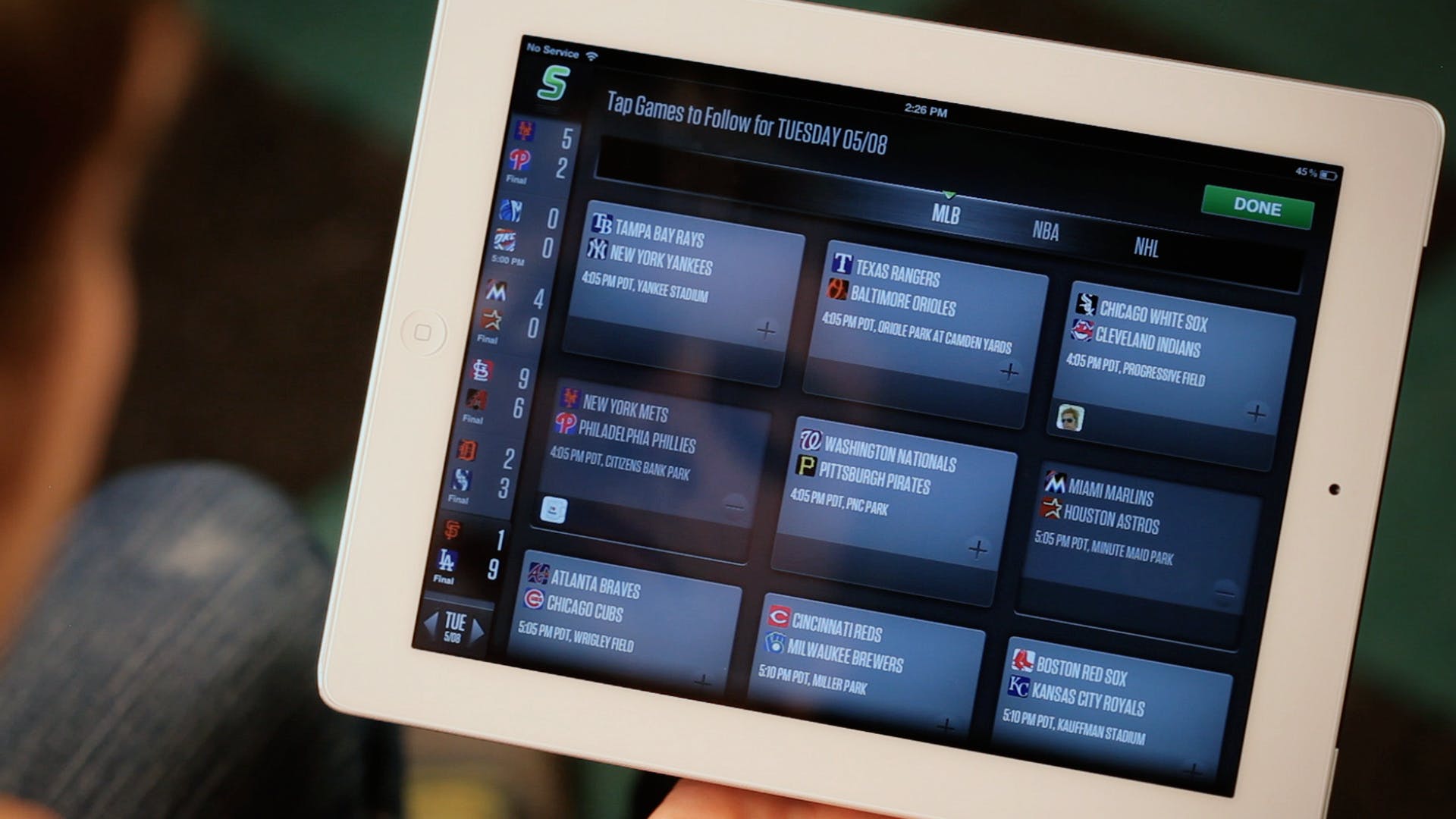 Brands will increasingly use ads designed specifically for mobile—for that second screen. Because these ads appear on a device viewers are already using to engage with responses, they have the potential to foster immediate action in a way that TV commercials can’t. Take, for example, that new Audi on TV—viewers could tap on the corresponding ad in the sports app to book a test drive or learn more. And be on the lookout for some cutting-edge mobile ads that feel like content or games and that you may even enjoy consuming.

With the proliferation of mobile devices, viewers are using a second screen as they watch live or broadcast sports. They are also increasingly using these devices to consume live sports directly. In other words, the secondary screen is also a primary screen. Those who are smart about this trend will make it easier and more entertaining for fans to use their devices both ways.

There’s been some movement here, but there is still room to grow and make it a mass-market possibility. Right now, the authentication process that allows viewers to get content they already get via cable or satellite is often cumbersome or even impossible (depending on the deals providers have made). In 2013, we’ll hopefully see major improvements in how fans access this content.

Easy live sports access on mobile devices makes the sharing of events even greater and the tuning in to “hot” events more immediate and efficient. This is only a good thing for broadcasters, as it will drive viewership every time action heats up in a sporting event. It’s easy to imagine the “TV anywhere” scenario: You’re watching a baseball game on your phone while running errands. Your team’s pitcher has a no-hitter going into the 6th inning. You post it to Facebook and Twitter with a link, and 10 fellow fans click through—and then do the same thing.

5. The Acceleration of Upstart Sports

As we all know by now, there’s something for everyone on the Web. People with more obscure hobbies or interests no longer have difficulty finding like-minded peers. Likewise, it’s also no longer necessary to have millions of fans for a sport to draw a crowd. A few thousand will do (and for that matter, going from a few thousand to millions is quickly accelerated through the clever use of social media).

UFC and action sports are good examples of sports on the rise that are leveraging digital and social platforms directly in their growth. The UFC offers some pay-per-view events for free to Facebook fans who have “liked” its page. Felix Baumgartner’s stratosphere jump spread like wildfire through social media and saw a record number—over eight million—of concurrent YouTube views. The America’s Cup is another example of a sporting event that will employ innovative technology in 2013 to likely reach a larger audience. The Liveline technology planned for the event will not only help sailors in the know “geek out,” but also make it more accessible for millions of sailing newbies that tune in to the action in the San Francisco Bay for the first time—and then share the excitement with their friends. 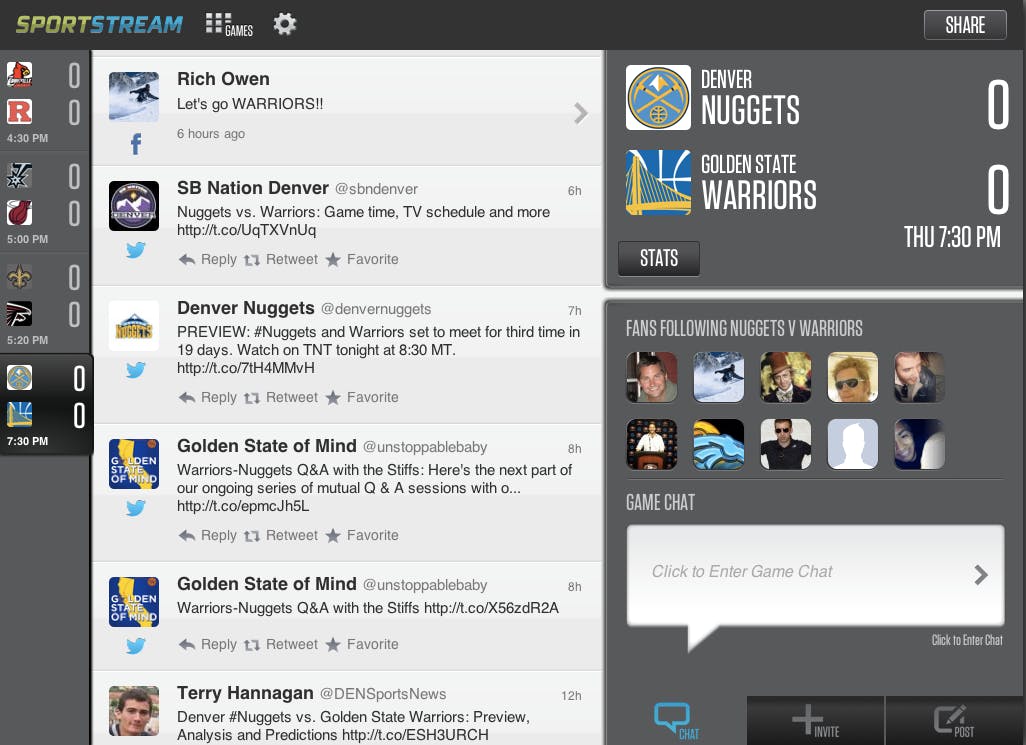 This is perhaps the greatest advantage of the new social side of sports: It’s expanding the entire universe of sports and fans. People who would normally just watch football or baseball (because it’s on network TV and it’s easy) are now discovering new sports they might not otherwise have found. How many people discovered rally car driving thanks to Ken Block’s Gymkhana video series? Well, in 2012, it was apparently quite a few after 39 million YouTube views of his amazing tour of San Francisco.

There’s a huge opportunity for mainstream and upstart sports alike in 2013. It will be easier than ever for people to follow the games they love and discover new ones in 2013—and get closer to more athletes. Thanks to the social stream, sports is becoming, quite literally, a bigger picture.

Bob Morgan is the CEO and co-founder of SportStream, a leading social second-screen app for sports fans. Bob has worked on cutting-edge Web and mobile products for over 17 years and has been producing consumer mobile apps for 12 years. He is the former General Manager of ShoZu and a former executive at Ofoto/Kodak Gallery.