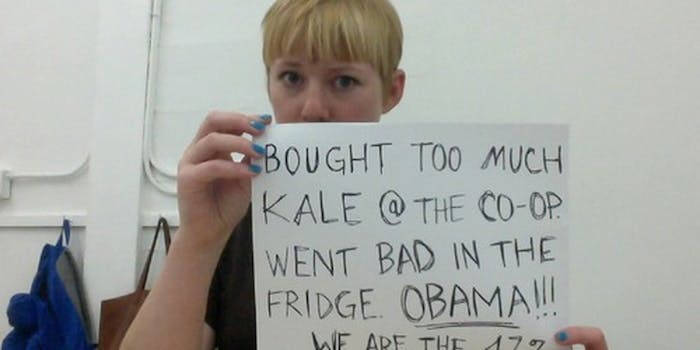 New Tumblr shares the whining of “The 47 Percent”

A new Tumblr spoofs Mitt Romney's controversial comments about the "entitled" 47 percent of Americans who pay no taxes.

Thanks to leaked footage of a private campaign event, Mitt Romney has unwittingly let the whole world know what he thinks of 47 percent of America.

Now, one Tumblr has emerged to prove him right.

On We Are the 47 Percent, contributors hold up signs about their whiny, self-absorbed plights and beg for free government money to procure unnecessary skin care regimes, new glasses, and more kale from the co-op. These are the freeloaders Romney was disparaging.

“Spent all my $$ on coke and condoms, can’t afford to re-up on my anti-anxiety candy,” one woman wrote. “Where’s my Obamacare? WE ARE THE 47 PERCENT!” 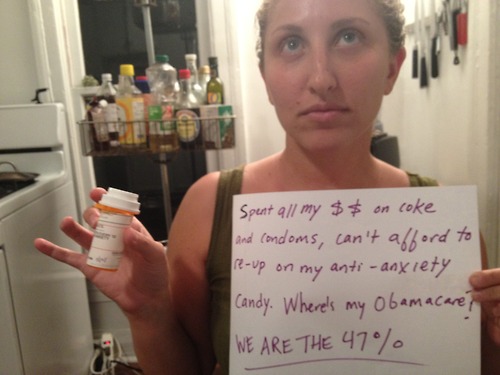 The blog is a clear parody of last year’s collection of Americans’ difficult times, We Are the 99 Percent. But in place of the earnest stories of hard-working people struggling to make ends meet, the 47 percenters only complain.

Of course, the lazy individuals airing their grievances here are no such thing. They’re actually employees of Tomorrow Magazine who don’t agree with Romney’s remarks.

“This man wants to be your president,” one of the bloggers wrote under a reblog of the leaked comments.

According to one of the Tomorrow writers, Zak Stone, however, it’s not so much an enraged statement as an opportunity to make a new image macro.

“New viral meme, created after working too long,” he wrote.

Photo via We Are the 47 Percent