Is Meerkat a winner-take-all proposition?

What appears radically democratizing at first could enshrine yet another digital divide.

As Meerkat dropped at SXSW this year, early adopters are hustling in on this ingenious app, only a few weeks old, that enables mobile livestreaming on smartphones with remarkable ease and quality. It cleverly uses Twitter to gather instant audiences for live mobile video. In fact, a Twitter account is required to broadcast or even use the mobile app. The frictionlessness of it all is startling when you first try it out. People who have already amassed big followings will easily dominate this new space. What about the rest of us? What if Meerkat only works for the already famous?

Meerkat chatter at SXSW Interactive this year achieved consensus that this signals a remarkable and irreversible shift in media and broadcasting. Even though the idea of streaming video live from a smartphone is not a novel invention, this app seems to finally get certain key subtleties right. At this moment, the Meerkat App has the potential to emerge as the first personal mobile broadcasting platform to gain substantial traction, in many ways precisely because it rides on Twitter and builds upon existing social connections with a potent scope of influence.

It’s not only the app’s design or built-in virality; it’s also a really impressive piece of technology. Consider the unsung heroes here:

The timing is right for Meerkat to pop up from a burrow in the converging fields of personal communication, professionalized content, and pocket computing. This aligning of the planets was discussed on a Meerkat session hosted by Mashable earlier today. But I can’t reference that spontaneous and informed discussion among tech reporters in retrospect as a source to cite. It vanished. Only the characteristic “|LIVE NOW|” tweet autogenerated when you start a Meerkat stream remains as residue in the Twitter timelines. That and @Mashable’s boosted Meerkat score.

Which brings me back the point I’m trying to make regarding Meerkat as a means to democratize media even more. Does it instead enable a neo-liberal winner-take-all dynamic that empowers mostly early-adopters and celebrities? At first glance, Meerkat and other next-generation (2G? 3G?) mobile streaming platforms promise to enable everyone the ability to reach everyone else. Anyone with an iPhone and a story to tell can amass riveted viewers in an instant.

But how easy is it to get people to watch your Meerkat? If you’ve never tried making a Meerkat, this is where you’ll discover an all-new social media anxiety that we don’t need. I bet this feeling will limit the spread of this new medium among anyone who doesn’t already enjoy celebrity status. Douglas Rushkoff wrote a book about this kind of Present Shock.

During SXSW and before I arrived in Austin, Texas, I tried some initial experiments on Meerkat. Thanks to the initial hype and the fact that I’m in the top 10th percentile of Twitter users (1000+ followers, 2.5K average impressions per day), I could attract 1–5 viewers per session. However, once at SXSW, it was much more difficult to reliably attract attention and gather an audience. On more than one occasion, I found myself streaming to no one. This made me feel foolish. At least you can save the recording to your phone’s camera-roll if you capture something really special.

But that wasn’t the impulse when I launched Meerkat. When you get even a single viewer on Meerkat, you are granted a purpose: to reward your viewership. You can see who’s watching as their Twitter profile avatar appears in the characteristic row across the top of the interface. The feeling is more akin to being on stage and making eye-contact with theater-goers. It’s different than staring back into a television camera to address an audience Nielsen can barely identify.

This new kind of personal validation should you manage to attract and cultivate live viewers is more potent than the automated affirmations of social mechanics (“like,” “fav,” “retweet,” etc.) and the ensuing neurotransmitter squirts you get from social app notifications. Your audience is granting you their most valuable asset: their durable and deep attention. Attention metrics are the new black gold. Data is mined. Users are fracked.

I saw Casey Newton of the Verge partying with Meerkat on the eve of SXSW making so many astute observations and a #MeerkatCentipede (when several people stream each other streaming each other). Again, it vanished into the beer-soaked Texas spring night. Perhaps he wouldn’t have said what he said if he knew it was on the record. He might have predicted the new future of brand advertising in jest. If anything will be democratized (and neo-liberalized), it will be the enabling of any speech to be sponsored.

Beyond Google AdWords, where anyone can play in the search advertising marketplace, just imagine when anything can be sponsored and monetized. All you need to do is an attract a rapt and devoted audience. Launching at the increasingly commercialized SXSW festival was prescient. We’re talking social video professionals, sponsored by brands, yes. Casey Newton said it on Meerkat, but I wrote it down on Medium. Douglass Rushkoff also produced an eye-opening Frontline last year on a new breed of sponsored social media personalities.

I keep diverging from the topic of Meerkat but this is symptomatic of how transformative it could become. The notion of personal broadcasting really catching on is kind of a big deal.

Here’s what worries me about Meerkat—that only the top 1 percent will manage to attract and build substantial audiences. What if most users will fail to attract viewers and feel bad? What if designing a great discovery experience remains elusive? It means that folks won’t try to create new Meerkats. Only the people who easily attract audiences will bother and gobble up expanding attention pools, further advancing up the leaderboards, and further erecting a higher barrier-to-entry for new voices. What if the Meerkat early-adopters are being rewarded for their first-mover advantage in attracting and building audiences?

Of course, every person is having a different experience: I aim to Meerkat professional content (minimal lifecasting). Foolish to assume my professional personality would be easily amplifiable, I didn’t expect Meerkat no-shows. Maybe I’m just not cool enough. To add insult to injury, the |LIVE NOW| residue tweets link to dead Meerkats touting zero views on my timeline. The hesitation to meerkat is especially apparent when streaming in crowds because people around me can witness my viewership status rendered on my screen in a row of circles across the top.

I’ll keep at it though. I intend on experimenting with a micro-lecture format, and try to do what I know how to do, while this plays out.

This strategy of building Meerkat upon Twitter has many advantages but is not without risks and pitfalls. Twitter gave the makers of Meerkat a two-hour notice during the peak of SXSW Interactive to notify them that their access to the Twitter social graph would be revoked. This coincides with Twitter’s acquisition of a direct competitor to Meerkat, an app currently in private beta called Periscope. Apparently, the key differentiator between these two apps is forgetfulness. Meerkat is ephemeral media—in that videos disappear from the cloud when they conclude—while Periscope is reportedly designed to preserve streams indefinitely.

My concern is not really for these companies and platforms and how we should call the horse race, especially when one owns the track. Instead, I’m wondering whether or not this advent of a viable livestreaming platform like Meerkat connects ordinary people with wide and loyal audiences. What new digital divide is being erected here, between the haves (popular people with smartphones and disposable income to feed telecoms for mobile bandwidth) and have-nots (off-the-grid voices who don’t hang with the cool kids)?

Indeed, until a major news event is broadcast live on Meerkat and then its footage is rebroadcast on television, we haven’t tipped. Once news is streamed live the moment it happens, well before the camera trucks arrive, it’s going to change who gets to see history happen first and who gets to tell the story in the process of making it. To be truly disruptive and democratic, discoverability without discrimination is crucial. Unfortunately, a curation algorithm discriminates by design, obscured by trade secret.

It’s still too early to tell just how easy it will be to become a breakout star on Meerkat like on YouTube. However, in the meantime, we can observe as early adopters gain a first-mover advantage as they succeed at converting their Twitter followership into an accumulating Meerkat score. The app features a Leaderboard where top users are ranked by their engagement score. We do not know how this score is calculated, but presumably it rewards streamers who frequently attract and sustain large viewerships. 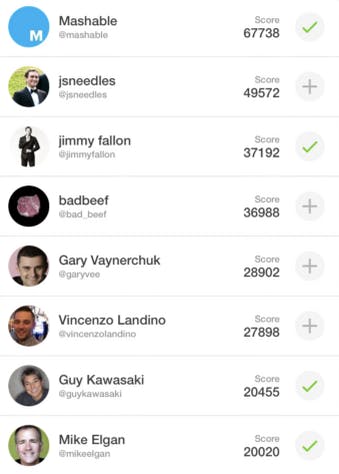 If we review the top accounts on the Meerkat Leaderboard as of 4pm ET on March 20 and compare their Twitter followership, we can observe that the top 1 percent of Twitter users enjoy a considerable advantage cementing their audience development lead on Meerkat.

I’ve noticed that Meerkat displays top users in the stream browser when you open the app, regardless of whether you follow them, further biasing popularity over reach.

It seems @jsneedles is on a quest to lifecast his life and become the alpha male of the Meerkat burrow. While we’re on the subject of alpha males, note that white men dominate the leaderboard already. Watch this space for diversity.

We find only two users not in the top 10 percent of Twitter on this leaderboard. They appear to be “lifecasting” rather than dishing up “professional content” like others on the leaderboard using tried-and-true TV and radio formats like interviews and call-ins for ask-me-anything (AMA). It’s unclear and unlikely that the “Life Cam” use-case of Meerkat will survive as new people compete for attention. Or is this our Truman Show moment? Indeed, watching the leaderboard ranking of @jsneedles and @bad_beef will validate or invalidate one or both of my hypotheses: 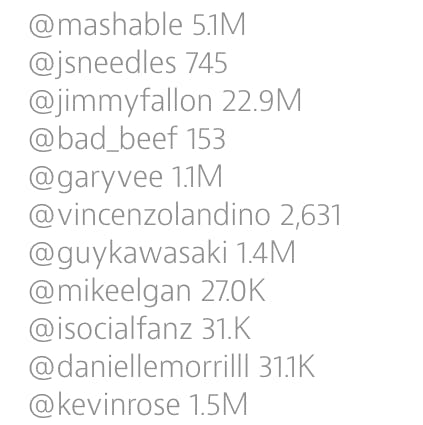 Even the creator of Meerkat has been bumped from the Top 15. He’s too busy iterating the app now that they know better than anyone else that 30 percent daily growth is something worth investing in. Now if I could only get the schedule feature to work or Ben Rubin and his partners make it even more useable.

It’s too early to tell what will happen to Meerkat. It could “Ello”—as in remain a well-trafficked but rather short-lived tech-press story of meteoric rise for a breakout disrupter, only to settle into a niche user base (and neither kill Facebook, nor television, nor manage to disrupt the user data business or media and advertising business very much). I certainly stopped checking Ello and evangelizing it sooner than I expected. I’m glad it exists though.