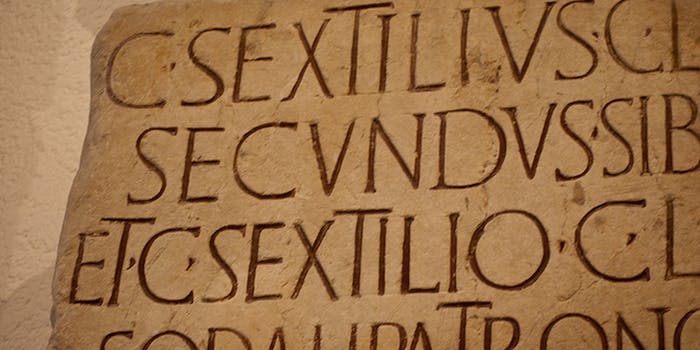 Misogyny meets Latin poetry on message board site Don't Start Me Off.

It’s not every day that Internet trolls are countered by a barrage of Latin poetry, but that’s what happens when you try to start something with Mary Beard. And now, the trolls’ message board has been shut down.

As the presenter of several successful British TV documentaries including Meet the Romans, Mary Beard is a far more public figure than most Cambridge professors. But after a recent appearance on BBC debate show Question Time, she’s been receiving attention for reasons unrelated to her work as a Classicist or political pundit.

Rather than providing a counterargument for Beard’s Question Time comments on immigration, many detractors took to the popular anonymous message board site Don’t Start Me Off—a kind of 4chan for disgruntled commentary on British celebrities and politicians. She was quickly named “Twat of the Week,” and Photoshopped vagina pics, insults to her middle-aged appearance, and even rape threats soon spread to Twitter—at which point Beard decided to go public on her blog, A Don’s Life.

She posted a few choice quotes from the message board, continuing:

“All the same, you may say … why pay it any attention, still less give it publicity?

“Several reasons. First, the misogyny here is truly gobsmacking. The whole site is pretty hateful … but the whole “c**t” talk … is more than a few steps into sadism.  It would be quite enough to put many women off appearing in public, contributing to political debate, especially as all of this comes up on google.”

It’s easy enough to question giving publicity to the trolls, except at 100,000 page views per day, Don’t Start Me Off is (or was) hardly the little guy. In the end, DSMO turned out to be something of a Goliath, finally shutting down for good on Wednesday of last week.

Screenshot via Don’t Start Me Off

If you visit the site now, nothing appears except an error message, but owner Richard White assured The Guardian that the hasty disappearance of the message board had more to do with the site having become “impossible to moderate.” The “Beard controversy was just the straw that broke the camel’s back.”

In the same interview, White accused Beard’s supporters of trolling DSMO with Latin poetry, adding: “My suspicion is that she used our site to deflect the debate because she was so roundly thrashed after her appearance on Question Time last week. We do not go out to be offensive.”

Although if screencaps from his own site are anything to go by, Richard White is no stranger to misogynist hate-speech. Just last year, he allegedly wrote of one left-wing female journalist: “There’s nothing wrong with Laurie Penny that a few hours of c**t kicking, garrotting and burying in a shallow grave wouldn’t sort out.”

At the moment it seems like we can barely get to the end of a month without there being another case of a high-profile woman receiving vicious (and usually undeserved) hate mail. But at least we can be sure that for every Laci Green who is forced offline by death threats and sexist mockery, there will be an Anita Sarkeesian or a Mary Beard who gets enough positive publicity to fight back.