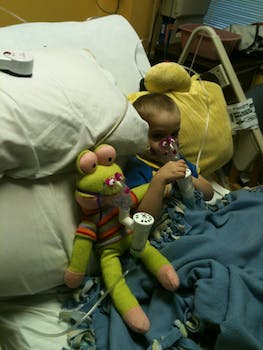 The compelling story of how one father found support and inspiration on Reddit for his son's battle with Cystic Fibrosis.

Most children suffer five to six colds a year that can be managed at home. For four-year-old Luke Allen, however, catching a cold usually results in an extended hospital stay.

Allen has Cystic Fibrosis, an inherited chronic disease that affects the lungs and digestive system. Roughly 30,000 children and adults in the United States have been diagnosed with the condition, according to the Cystic Fibrosis Foundation. Over the last four years, Luke has been in the hospital about 20 times.

“He pretty much spent the first six months of his life projectile vomiting, screaming at night,” said Luke’s father, Daniel Allen, 29. “He’s made it through the summer without being admitted, which was good. … So even though he’s been admitted a lot of times, they’re starting to become less frequent.”

On Monday, Luke was hospitalized at Chicago’s Children Memorial Hospital for a staph infection and 102-degree fever. While hooked up to a nebulizer, a device used to administer medication in the form of mist to be inhaled, Allen’s ex-wife Courtnie Cutler snapped the following photo of Luke and Allen posted it to Reddit late Wednesday night to help raise awareness about the disease. The title of the post: “This is my 4 year old son. He has Cystic Fibrosis. He’s my hero.”

“My brother (23) and I (25) both have CF and both got tattoo’s on our backs where our lungs are with the dates of our 16th bday written as an expiration date label,” wrote jdmraver, who also linked to a photo of his back. “The doctors told us that neither one of us would make it pass 16yrs old so we got them out of spite and motivation to prove the doctors wrong.”

“Hey, Just wanted to say never give up hope. …I also have Cystic Fibrosis and was almost at the end of the road, I then had a double lung transplant January of this year and my life has never been better,” wrote max_steel. “I’m now more healthy than most of my friends.”

Life expectancy for people with Cystic Fibrosis varies greatly, but according to the Cystic Fibrosis Foundation, most people can “now expect to live into their 30s, 40s and beyond.” It’s this sort of information—and redditors’ stories—that gives Allen hope.

“It gives me some insight on what to expect when Luke is older because there’s always the possibility that I will have to support him when he gets older,” said Allen, who is a web designer and user interface designer for the Reddit Enhancement Suite.  “He may not be able to hold down a job because employers don’t like it when you spend weeks at a time in the hospital.”

Allen is unsure when Luke can return home. In the meantime, he plans on spending all the time he can with his son, who is also a huge Thomas the Tank Engine fan.

“It’s a life upsetting thing, makes you very emotional. And when you leave it’s such a relief,” Allen said. “Everyone has to do things to survive. … I don’t ever want him to feel like he’s significantly different than anyone else. I’m never going to treat him differently.”