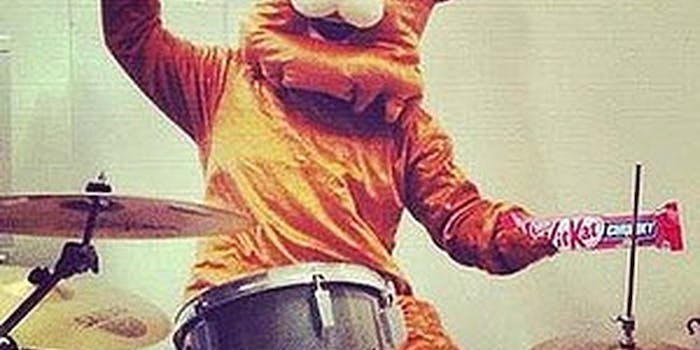 Marketers for the popular candy bar unintentionally called to mind the notorious pedophile bear in the launch announcement for their Instagram feed.

When marketers for Hershey’s Kit Kat candy bar posted a photo of a person in a brown bear suit using two big Kit Kats as drumsticks on Facebook, the company probably thought it was being cute.

What they didn’t realize was the bear’s resemblance to Pedobear, a cartoon drawing of a fuzzy bear posted as a warning, and sometimes a joke, whenever someone is sexualizing children online.

“Drum roll please … Kit Kat is on Instagram,” read the caption above the photo, which has since been taken down.

“We produced this photo—of a real guy in a bear suit —to launch Instagram through our Facebook community,” a Nestle spokeswoman told The Sydney Morning Herald. “The picture is not Pedobear.”

In September a college student on Reddit got into some trouble after he purchased a print-out version of the bear and taped it behind the elevator door in his dorm building. Whenever the door closed, it revealed the bear, peeking out creepily.

Photo via The Sydney Morning Herald