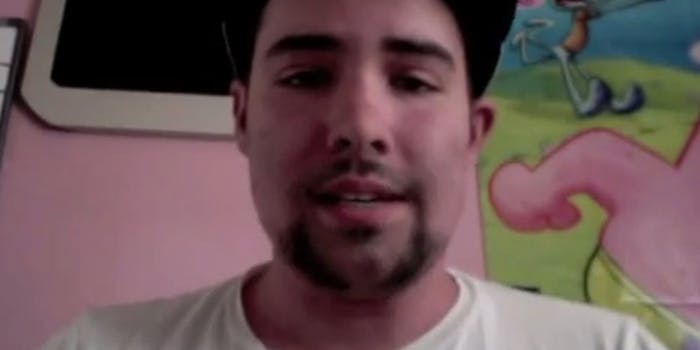 20-year-old Tony Harrison has a few months to live, and told YouTube he wants to spend one of his remaining hours hanging out with pop star Katy Perry.

These are questions that 20-year-old Tony Harrison has been forced to answer this month. A cancer patient since 16, Harrison recently received word that he only only had a few months left to live. The bone marrow transplant he’d received a few months prior had failed to make a difference.

Harrison took to YouTube on Friday to break the news about his situation to his friends and loved ones.

“There is nothing more [the doctors] can possibly do,” the Sumner, Wash., resident said. “All they can do is give me the chemotherapy in the meantime to prolong the inevitable. I only have a few months.”

Harrison used the second half of the three minute video to explain his plans for the remaining time before he goes. He’s put together a bucket list, he said, that lists each activity he hopes to take part in before passing.

He rattled each objective off in a second video titled “Bucket List Ideas.” Among other things, he wants to go hunting, go skydiving, take a helicopter ride, shoot a series of high powered guns, and “eat at a place where they completely overcharge for food.”

Harrison made separate videos for his final two bucket list items. Both dealt with music, one of his many passions. In one, he explained that he wanted to throw a free concert on August 10, one that would bring the Sumner music community together to eradicate the hate he sees within the scene.

“I want to leave this scene with a bang,” he said. “I want people to remember what we’re all about: friendship, family. It’s not about money. It’s not about greed. It’s about the bonds we’ve built along the way.”

Harrison’s most touching clip came in a video titled “To Katy Perry.” In it, he explains his affection for the pop star and says that he’d love to meet her in his final months.

“You’re on my bucket list,” he said in the video. “I would love to meet you for just an hour of your time. It would mean a whole lot to me. You have great music. You’re a great person overall. Everyone wants to meet their celebrity idol, and you’re mine. It would be great to see you.”

Since posting onto YouTube Friday, the minute-long video has received 17,450 views, though it’s unknown whether the video has crossed Katy Perry’s eyes, despite the efforts of her KatyCats fangirls.