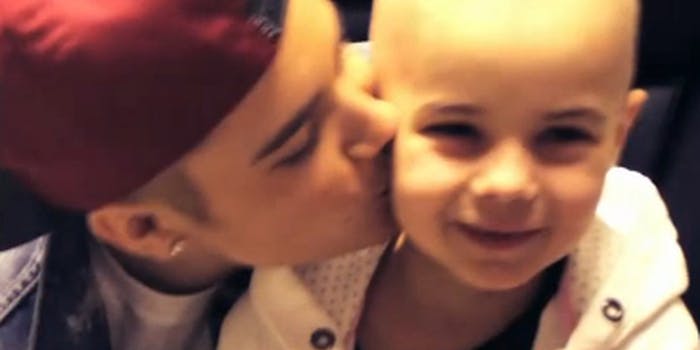 Thanks to a viral Facebook campaign, Justin Bieber lifted a 7-year-old fan's spirits amid her battle with leukemia.

Do you belieb in miracles?

Millie Flamm, 7, planned to see Justin Bieber at his concert stop in Salt Lake City. Instead she had to be readmitted into the hospital, due to a relapse in her three-year battle with leukemia.

Disappointed that Millie couldn’t see Beiber, a friend posted her picture to Facebook begging to meet him.

“If anyone has any connections to get Justin Bieber to visit Millie at Primary Children’s Hospital while he’s in Utah it would mean so much to her & her family!!,” a call-for-action post read from P.S. I Adore You, a family friend’s Facebook page. It attracted more than 3,000 shares, likes, and comments. A conversation transpired among fans on how to get the singer’s attention, with one fan even claiming to personally know his off-and-on girlfriend Selena Gomez.

While it’s unclear how it transpired, the campaign worked. Beiber visited Millie in a Utah hospital prior to his show on Saturday.

Millie’s parents managed kept his appearance a secret to the young girl. She was described as “anxious” when Beiber entered the room. He sang her favorite song, “Boyfriend,” and even kissed her on the cheek.

“Justin Bieber is my favorite singer and I love, love, love him,” Millie told KSL-TV. She’s expected to be released from the hospital in three weeks.

“There is no way to say thank you to everybody that helped make this happen,” added Millie’s mother, Amanda. “I have no words but ‘thank you’ and that’s not even enough.”