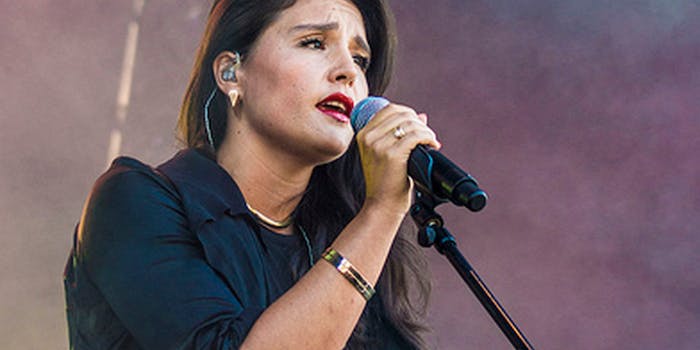 "I will never sit back and take it," Ware told the Jewish Chronicle.

Rising singer-songwriter Jessie Ware is not running away from Twitter after a user tweeted an anti-semitic insult at her.

Following an appearance on a U.K. music program early Saturday, the British Jewish singer tweeted a compliment to DJ A-Trak, whose real name is Alain Macklovitch, to which a Twitter user by the name of “John Sin” tweeted a message attacking Ware’s religion and background.

“@Jessie_Ware cor a conk like that bet your deluded like those other cunts at the JC,” tweeted the hater. The insult, which is steeped in Cockney slang, refers to her nose and her previous internship at the Jewish-focused newspaper, Jewish Chronicle.

Ware, 26, tweeted back saying “pardon?,” but the attacker felt wrath from other Twitter users—and even Ware’s mother. “You are revolting and I am reporting you for outright racism,” replied Helena Ware, who also called Sin a “horrible sad man” in another tweet.

After the abusive message, Ware tweeted “Pretty shocked by my first encounter with an antisemitic twitter troll last night. I won’t stand for it.”

Ware told the Jewish Chronicle that the attack was “upsetting and moronic, but I will never sit back and take it.”

The insult didn’t hamper Ware’s celebration of watching her debut album, Devotion, land in the fifth slot on the U.K. album chart on Sunday. She tweeted “cheers mazel l’chaim everyone,” following the announcement.