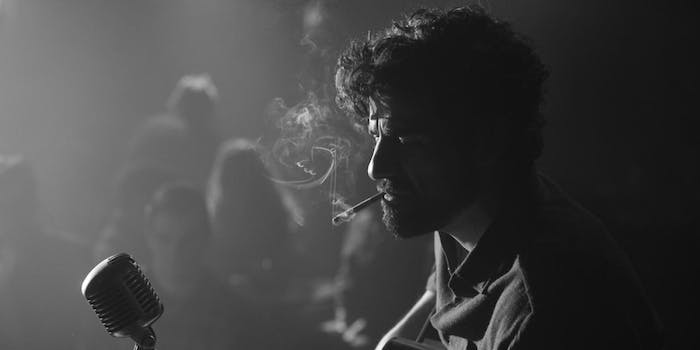 Start with the movie: Inside Llewyn Davis. Bitter and adrift, Llewyn is a hard character to admire when he’s not singing. The story follows his last-ditch effort to launch a solo career after the death of his singing partner. If there’s a virtue you can hang on Llewyn, it’s that he’d rather concede failure than compromise the integrity of his work.

So what does the film’s distributor, CBS Films, do to promote the film for Best Picture consideration? They ask a prominent reviewer, A.O. Scott, for permission to use one of his tweets (modified to avoid breaking the Academy’s rules about criticizing competing films) in an advertisement. Explaining that the modification would compromise his own integrity as a critic, Scott declines. Undeterred, CBS Films goes ahead as planned, publishing the modified tweet as a full-page ad in Scott’s own paper, the New York Times. 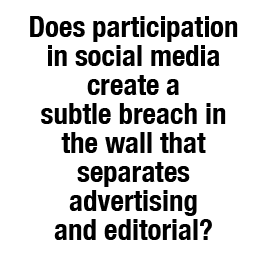 That certainly drew attention, although very little of it centered on the movie’s Oscar chances. After Scott expressed his surprise in an early morning tweet on Sunday, news of the ad spread across Twitter and soon moved to sites that cover the media. Even Scott Rudin, one of the film’s producers, waded into the fray, telling the Times’ ombudsman, “If a critic is going to tweet it, we’re free to use it […] We’re free to edit any review. We pull out what we want.” The poetic irony of compromising integrity to promote a movie about uncompromised integrity was quickly eclipsed by discussion of the precedent that set.

Not that distributors have shied from using Twitter to promote their movies before. Therein lies the second contradiction. Whether or not audiences actually heed them, promoters love to excerpt favorable quotes from movie reviews. The more prestigious the source, the more eager a trailer or print ad is to echo its praise. They’re so in love with such blurbs, in fact, that when the reception from more respectable reviewers is uniformly chilly, some promoters will scrape the social media barrel for plaudits from, well, just about anyone, hiding the attribution in print so fine that it makes lawyers giddy with admiration.

If you’re like me, that renders Rudin’s rationale for the ad all the more obscure. I’ve trained myself to scoff (audibly, in most cases) whenever an ad tries to woo me to the box office with praise sourced from social media. So why run the risk that we’ll recognize the platform but not the person? If A.O. Scott actually recommends the film, why not quote from his review, rather than his Twitter account?

The confusion is by no means cleared away when we look at the ad itself. “I’m gonna listen to the Llewyn Davis album again,” it reads, following with a signoff modeled on one of the songs: “Fare thee well, my honeys.” Even as an endorsement of the soundtrack, that’s pretty tame. It does very little to add heft to the text at the bottom of the page, which proclaims the movie “the best picture of the year.” With that as your evidence, you’d be forgiven for suspecting that Scott’s opinion of the movie itself wasn’t so favorable.

Strange thing about it, though: You’d be wrong. Scott did, in fact, cover Inside Llewyn Davis, and his review was downright adulatory. “[A] brilliant magpie’s nest of surrealism, period detail and pop-culture scholarship,” he called the movie. The 1960s Greenwich Village it depicts is, as he would have it, “an enchanted place, animated by the dark, nimble magic of the Coens and their collaborators.” Either quotation would have made a stronger endorsement of the film than signing off Twitter to listen to its soundtrack.

So what gives? One possibility is that Twitter was part of the deal, working with CBS Films’ marketing department to place an influential tweet in a prominent public forum. It certainly wouldn’t hurt Twitter’s public profile to be seen as a platform where cultural mavens like Scott pronounce future Oscar winners, would it? That’s pure speculation on my part, mind you—inquiries made to Twitter’s press team went without a response—but if true, it would make sense of a fairly nonsensical situation.

If nothing else, it would explain why Rudin and company did not fear running afoul of a Terms of Service that, as Matthew Ingram pointed out, explicitly forbids rebroadcasting tweets in other media without the author’s consent. It would also explain why they were so hell-bent on building their ad around text that had little to do with the movie itself. The message may have been less important than the opportunity it provided for giving a tweet its own page in one of the country’s most read and respected publications.

And what about the Times? At first blush, at least, its stake in all of this was a good deal clearer. They pay the costs of publication by selling ad space, and pocketed a neat $70,000 for the Inside Llewyn Davis deal. Running an ad that featured an explicitly unauthorized quotation from one of their own critics may have been embarrassing, but it’s an indirect consequence of a very good policy, one that protects against bias by holding the editorial and advertising departments at some remove from one another.

We’re so accustomed to framing our perceptions of journalistic integrity in terms of that policy, in fact, that we might have altogether missed the third contradiction. It was the Times’ own Public Editor, Margaret Sullivan, who drew our attention to it.

“The Times encourages its writers to be active in social media,” she wrote. “This, at least in part, benefits The Times as a business entity as opposed to The Times as a journalistic beacon. Brand-building and all of that. So shouldn’t there at least be some conversation between advertising and the newsroom about boundaries and practices?”

There should! And the first topic for discussion ought to be: Does participation in social media create a subtle breach in the wall that separates advertising and editorial?

At the very least, the Inside Llewyn Davis episode suggests how it might.

The credibility of critics would be greatly eroded were they to manufacture blurb-ready praise for the purpose of encouraging advertisers to quote them in paid ads in the same publication. Yet, Twitter and other ancillary broadcasting tools like it afford them the opportunity to do just that, while simultaneously giving the publisher grounds for plausible denial. After all, the suspect quote came not from their own pages, but from someone else’s platform.

Never mind that the writer was there at their behest and to their profit. In a news market that makes involvement in social media a prerequisite for staying relevant, that may end up being the most intractable contradiction of the three.