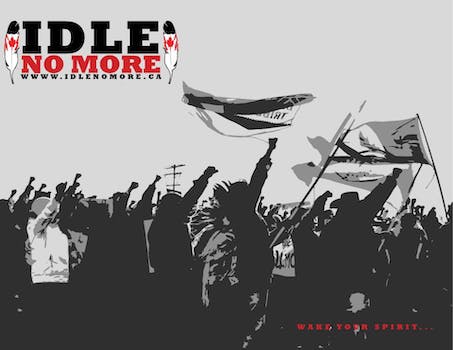 Idle No More has been described as the Occupy movement of Canada.

Social media is giving voice to those in some of North America’s most remote corners as part of the ongoing Idle No More protest. Since November, Aboriginal peoples of Canada have been protesting actions by the government that they say violate historic treaties with the First Nations, including agreements over water and land rights. The movement has been compared to Occupy Wall Street in 2011.

In the past, the largest voices of the Aboriginal people have been the First Nation chiefs, according to TheStar.com writer Karissa Donkin, who interviewed University of Saskatchewan student and activist Erica Lee.

“Social media allows the people who are actually directly involved and impacted by these kinds of movements to have their voices heard,” Lee said. “It gives [people], especially in northern communities and rural First Nation communities, a chance to be connected with events and be inspired by other peoples’ event that they might not have access to, that they aren’t seeing on TV and in the newspapers.”

Lee first became involved with the Idle No More protest in November, when about 100 people gathered in Saskatoon. It was during those early days in November when Tanya Kappo reportedly first used the #IdleNoMore hashtag, which has become the calling card for the movement. Soon after that initial protest, a Facebook page was created, and in less than two months, it has gained more than 76,000 likes. Since its creation, the Idle No More Facebook page has become a hub of activity, with people sharing stories, information about events and ways to participate.

Perhaps the biggest example of Idle No More’s social media reach, is the #IdleNoMore tweet map, which shows the 679,000 messages that have gone out since November and where they came from. While the bulk of the Twitter activity has been in southern Canada, the map shows activity as far north as Nunavut, inside the Arctic Circle.

So far the movement appears to be getting results too. On Jan. 11, officials from some of Canada’s tribes met with Prime Minister Stephen Harper in Ottawa.

Ryerson University professor Ron Stagg told TheStar.com, that much of the movement’s success is due to social media.

“What this group has done with social media is to make [them] into a national issue,” he said. “This is one way people can get together.”