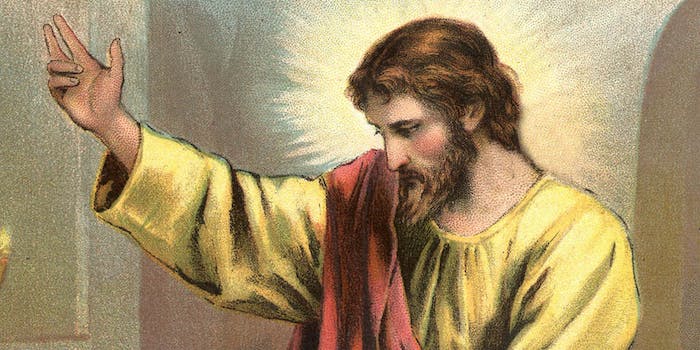 Why Hollywood’s Jesus keeps getting sexier and sexier

Son of God's Diogo Morgado was branded #HotJesus on Twitter. He may be sexy, but his Christ is anything but radical.

When the Bible miniseries premiered last year on the History Channel, viewers reportedly felt the power of the Holy Spirit in a way they weren’t intending. The miniseries cast Portuguese actor Diogo Morgado to play Jesus Christ, and the hashtag #HotJesus quickly started trending on Twitter. Jezebel called Morgado “the Jesus of your OKCupid dreams.” But in adapting Jesus’ story for Son of God, the film based on the wildly popular program, producers Mark Burnett and Roma Downey make it clear Jesus isn’t just sexy. Their Jesus is also white.

In an editorial for CNN, Carol Costello argues that casting a former model as Christ was a way to make Jesus Christ “more appealing” to audiences, much like the man with six-pack abs we see in representations of the icon. Morgado’s race functions the same way—so blindingly white that in many scenes he appears to glow like a painting. A pastor in North Carolina urged his followers to boycott the movie, arguing that it doesn’t speak to black people, but the problem is that a cartoon Jesus doesn’t speak to anyone.

Although the film was screened for the Anti Defamation League, as producers were worried it would court similar controversy to The Passion of the Christ, the film has little in common with Mel Gibson. Son of God’s politics more closely align with Aladdin.

In a review of the film for The Wrap, critic Inkoo Kang writes, “Like Disney’s ‘Aladdin,’ a character’s goodness can be seen discerned from his Northern European features (including Morgado’s), while a villain’s wickedness corresponds to a more Semitic visage (like Joe Wredden’s Judas Iscariot and Paul Marc Davis’ pharisee).” Like Aladdin’s Jafar, you know Judas is up to no good because he has a long, pointy beard.

In contrast, the film’s most naked expression of its racial politics is the casting of Mary, played in her youth by English actress Leila Mimmack and later by producer Downey, the former Touched by an Angel star, both of whom are as also white. For Catholic viewers, her ethereal whiteness will recall the holy imagery of the Virgin Mary, who is venerated as a saint in her own right. Downey is Irish, and with her face marred by plastic surgery, she looks more like Steven Tyler than a woman who could have lived in pre-modern Israel.

This is hardly the first time that Hollywood has employed white actors to tell the story of a nice Jewish boy growing up in Mesopotamia. From The Greatest Story Ever Told to The Last Temptation of Christ, Hollywood Christ is usually Caucasian, and according to The Daily Beast’s Matthew Paul Turner, this cinematic whitewashing is precisely why Jesus movies often “suck.”

“Few things cause the story of Jesus to fall short of God’s glory like a factual cinematic portrayal acted out by pretty Caucasians with British accents and bed-head walking joyfully across barren landscapes to a dramatic symphony of flutes and strings,” Turner writes. “At times, I swear I was watching the cast of Downton Abbey on vacation in Morocco.”

In an advice column for Ebony in 1957, civil rights leader Martin Luther King argued that relying on white people to tell Christ’s story misses the point. “Why did God make Jesus white, when the majority of peoples in the world are nonwhite?” King asked. He believed that Christ should transcend race. “The color of Jesus’ skin is of little or no consequence,” King wrote. “The whiteness or blackness of one’s skin is a biological quality which has nothing to do with the intrinsic value of the personality.” The Atlantic’s Jonathan Merritt added that following King’s advice is important in “[creating] communities that are able to worship a Jesus who builds bridges rather than barriers.”

Herein lies the problem: Downey and Burnett didn’t try to tell a story about a Jesus created in God’s image, a man who came to change. They created a movie in their audience’s image instead.

The pair met with churches and congregations to put together the film, the focus-grouped version that adhered to the man in the painting people grew up with. Their Christ isn’t historical. Downey and Burnett gave Christians the Disney version, devoid of any of the power that made Jesus revolutionary. Jesus Christ was a social justice advocate and a rabble rouser, an anarchist who challenged society to reconsider its outcasts, and Runway Jesus only hints at the man that was.

Diogo Morgado may be sexy, but there’s nothing radical in his Jesus. He’s just another pretty face on a wall.