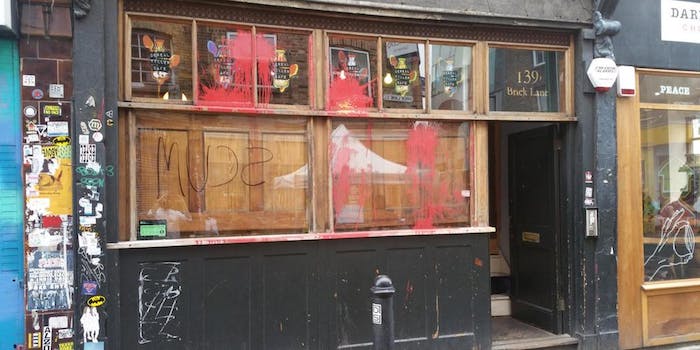 There is an English folk song from the 17th Century about the Diggers of St George’s Hill. The Diggers were a group of radical peasants who felt that land belonged to the people, not the landlords. Thus they began farming on common land. In the 1970s, Billy Bragg turned a version of this song into a fairly big hit. “They defied the landlords/they defied the laws/They were the dispossessed/Reclaiming what was theirs,” he sang.

The Diggers were fighting inequality before it was cool, unlike some disenchanted hipsters who this weekend declared civil war on their peers.

On Saturday, a group of activists brandishing torches and boomboxes took to the streets, ostensibly to protest the same thing the Diggers were—except they definitely weren’t. A fledgling anarchist collective known as Fuck Parade stormed the Cereal Killer Café in Shoreditch, a regenerated East London enclave that was long a working-class community but has gentrified during the past decade. It’s a process repeated across the city as poorer residents have been priced out and middle-class hipsters and, yes, their decadent cafes and gastropubs, have moved in.

Since opening last year, the Cereal Killer has been a lightning rod in the debate over regeneration in the British capital. Its extravagant premise—it serves bowls of cereal from around the world for as much as £7—has been roundly condemned as the worst of vapid hipster bullshit. But, as Suzanne Moore wrote shortly after the café opened, “no one made this fuss about the cat café or endless overpriced vintage clothes shops in the area.” And she’s right. The Northern Irish twin brothers who opened the café, with their beards and flannel shirts and penchant for irony, didn’t single-handedly gentrify Shoreditch. Hell, they didn’t even start it. Shoreditch has been gentrified for years.

Government figures show that over the last year alone, homelessness in London has increased by 10 percent.

Fuck Parade is right to raise the issue of housing inequality. Those of us who cover British politics, especially those of us who report on London, will tell you that housing is the most pressing issue in residents’ minds. “It’s impossible to get a decent home,” one Londoner told me earlier this year. “All of us have difficulties with housing.”

Considering government policy, this is unsurprising. In the more than five years David Cameron has been prime minister, homeownership in England and Wales has decreased by 250,000. This is driven by both by rising income inequality and a shrinking supply of homes for sale, currently at an 11-year low. Government figures show that over the last year alone, homelessness in London has increased by 10 percent. This figure is likely to increase even more as government policy could see more than 60,000 council homes sold off in London alone. The average Londoner pays nearly half their weekly income to their landlords, who are buying up social housing at a dizzying rate; nearly 40 percent of social housing sold under Right to Buy is now privately rented. This means higher rents for residents who, in many cases, have lived generations in the same borough.

All of this can more accurately be traced to the Conservative Party’s austerity and the auctioning off of London to the world’s wealthy, not a couple Belfast brothers with beards and bran flakes. This is where Fuck Parade got it wrong.

Its members protest a symptom of gentrification, not the cause. Writing for Londonist, Rachel Holdsworth named six things more deserving of protest than a café serving frosted breakfast foods. From One Hyde Park, which she describes as “an empty series of safety deposit boxes masquerading as eye-wateringly expensive apartments,” to a housing estate which was torn down to be redeveloped with almost 50-percent less social housing than it originally had, there’s plenty to be angry about.

But protesting hipsters in a “fun and furious” way with “music, pyrotechnics, and cheeky banner drops”—as Fuck Parade’s members described their actions—is more self-indulgent than it is social protest.

Thanks to all the revellers and ravers that made the #FuckParade Night night xxhttps://t.co/7dg1CwiOsB

And while they’re right that London will soon be “an unrecognisable, bland, yuppie infested wasteland with no room for normal (and not so normal) people,” they may be wrong in assuming that those people are people like them. While demographics on Fuck Parade are lacking, the New Statesman’s Anoosh Chakelian did some digging and offered some analysis which indicates they may be a certain type prominent in British left-wing circles: the sort of middle-class neo-anarchists who are gentrifying the very city they’re fighting to stop regenerating. As one person told Chakelian, they’re the type who thought “it was OK to be born to rich parents if you resented them. But not to move into an expensive area.” But if these middle-class, often white kids aren’t moving into expensive areas, they’re moving into poorer areas (such as Shoreditch) where their privilege—both wealth and, often times, whiteness—spurs the gentrification they’re fighting.

today the tenants of @FredJohnTowers had a magnificent victory. They linked arms, stood together and won. We regroup and fight on….

It’s the kind of direct grassroots action that Fuck Parade should be promoting and supporting. Yet as the world was tweeting at and about the collective, not a single comment from them. Social media is instead talking about whether overpriced cereal is really worth throwing bricks at. That’s the great shame of Fuck Parade’s action: They clearly know how to get attention. They used Facebook to coordinate the event, Indiegogo to fund it, and Twitter to spread their message.

But they didn’t use their platform productively, to put it mildly. Instead, they had a street party which served only to drown out the voices of those who are actually fighting gentrification, and whom could desperately use their support and the world’s attention. Unlike the Diggers, they defied the laws, but they didn’t defy the landlords. Instead, Fuck Parade has allowed them to go on turning London into a playground for the world’s rich while the rest of us debate cereal. That’s not radical—it’s disgraceful.

Fuck Parade is to anti-gentrification what Richard Dawkins is to atheism.