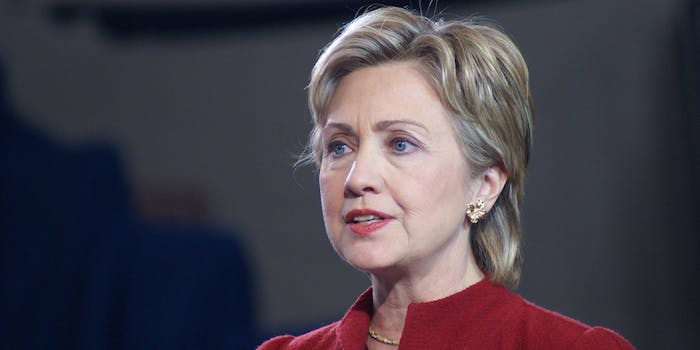 Hillary Clinton has quickly become the Internet’s presumptive nominee for president in 2016, the most popular not-yet-candidate in the Tumblrverse. As the conversation heats up about her candidacy, pundits are already beginning to wonder: Who’s going to be standing to her left as her running mate?

Contrary to recent speculation from the New York Times’ Jennifer Steinhauer, who points out a number of viable candidates for the spot, it’s not going to be a woman.

I’m not saying it shouldn’t be—quite the contrary. As Scheinhauer points out, “Never has there been so much rising female talent in the Democratic Party, with a record 20 women in the Senate, 16 of them Democrats.”

I’d love to see Hillary Clinton and my personal favorite, Sen. Claire McCaskill of Missouri as the Democratic nominees. But the reality is that women are still sorely underrepresented in elected office, they still earn 77 cents for every dollar a man makes, and across the country women, specifically lower income women, are stuck in a 1950’s mentality of the woman’s place in the home.

Clinton, assuming she runs and becomes the nominee, would have a great slate of powerful women to choose from. There’s Massachusetts Sen. Elizabeth Warren, who emphatically says she won’t run, Sen. Amy Klobuchar of Minnesota, Gov. Maggie Hassan of New Hampshire, among others (Sen. Kirsten Gillibrand of New York would be barred from running with Clinton since both are from New York).

Because this has never happened before, political consultants and scientists interviewed in Scheinhauer’s Times piece offered historical comparisons to give it merit, all of which are pretty bogus.

First is the California U.S. Senate race in 1992, which saw two women running for two open Senate seats in the same election cycle. Those two women, Senators Dianne Feinstein and Barbara Boxer, were both elected.

But that’s California, which does have pockets of conservatism, but was the first to establish a medical marijuana program and the first state to offer domestic partnership benefits to same-sex couples. Then there’s New Hampshire, which awesomely has all female statewide elected officials, but was also ranked by Gallup in 2012 as the 10th most liberal state in the country.

The most bogus example cited is the 1992 election of Mr. Hillary Clinton, ex-President Bill Clinton, and Sen. Al Gore of Tennessee.

Bill Carrick, a Democratic campaign consultant in Los Angeles, says that a great ticket, regardless of it’s groundbreaking precedent potential, is more than enough to win, and cites that in the case of Clinton-Gore, voters said, “You can’t have two progressive Southern young candidates.” Carrick argues instead, “You can’t until you do it.”

I agree that their youthfulness was a game changer, but come on, two Southern white dudes, the type of which ran the show in American politics for how long, are agents of change? This voter doesn’t buy it.

The example that should be cited, and will likely dictate Hillary’s thought process in 2016, is what went down in 2008.

Remember when there was speculation that Obama might pick her to be Vice President? Even Obama added to the chatter, telling NBC’s “Meet the Press” on July 27, 2008, that Clinton “would be on anybody’s short list.”

It would have been great, but was never a real possibility. In 2008 that was only a dream, as it was widely speculated that the country wasn’t ready for a black man and a woman on the same ticket. Even if the country was ready for it, why would Obama take that chance? He wanted to get elected.

So who did the young, change-agent, Barack Obama choose to be his V.P.? The oldest of the old guards, the cookie cutter version of every V.P. ever, an old white dude, Uncle Joe Biden.

Obama saw a loss in white male voters in 2012, and so maybe another old guard figure like Biden would help settle any uneasiness of a woman behind the big desk—an uneasiness that you should keep to yourself, because it’s not 1954.

During the last election, Romney picked Paul Ryan because of his all-American Midwestern appeal to attract these type of voters. However, they not only lost Ryan’s home state, Wisconsin, they also lost the election and pretty much every important group you need to win, most notably women and Hispanics.

Past Republican presidential nominees, namely George W. Bush, did well with both of these groups. If you ask me, the smart money is on a younger, Hispanic politician, somebody like Mayor Julián Castro of San Antonio, Texas.

It’s there that lies the real question that needs to be asked: Is the country, in a post-Obama electorate, ready for a woman and a person of color to be on the same ticket?

The answer is yes. If there’s any woman (and future grandmother), that Americans will accept for president, it’s Hillary Clinton.

A recent poll from US News and World Report showed that Americans are more than ready for a female president, no matter what Michele Bachmann says. Looking at the data, Barack Obama argued that the growing Latino population means he’s almost certain to see a Latino candidate in the near future. “With numbers comes political power,” Obama reminded us.

He’s right. These two communities harmoniously brought together on a Clinton ticket is all but unstoppable.

“If Hillary Clinton decides to run, she will bring many women with her. Her candidacy would be a historic moment in mobilizing women’s interest. But whether she would put another woman on the ticket, that’s a very different calculus. As women we tend to do our changes in increments,” said Ruth B. Mandel, the director of Eagleton Institute of Politics at Rutgers University.

Incremental change is not evil or going against your people; Obama knew this in 2008 and Hillary Clinton knows this now. Like Obama, she wants to win. She also knows that by cementing her own legacy on a diverse ticket like this, she incrementally creates the change needed for a two women ticket in the future.

In doing so, Clinton campaign will ignite the electorate in a way that eluded her in 2008, hard learned lessons she won’t soon forget in 2016.

H. Alan Scott is a writer/comedian based in New York City and Los Angeles. His work has been featured on the Huffington Post, Thought Catalog, OUT, xoJane, The Advocate, MTV, and Time Out. He really wants you to follow him on Twitter at @HAlanScott.