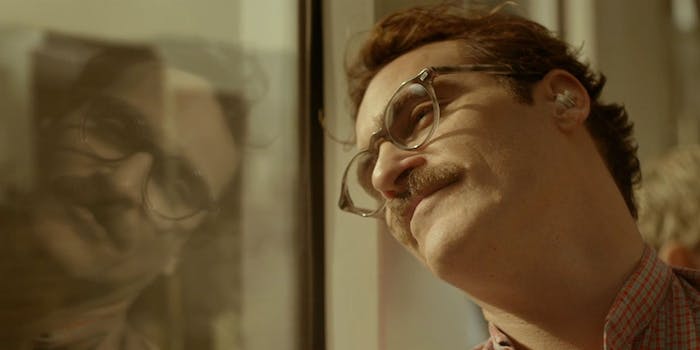 While some might see the attachment to technology in Her as a prison, to me it was liberating.

It’s something many of us are familiar with: a phone call from a parent. “I’m trying to get into my email.”

And just like that, we put on our IT help desk hats, try to visualize our parents’ desktop (pictures we emailed them of our vacation four years ago, PDFs of restaurant menus downloaded in error while trying to find the restaurant’s hours, three different versions of Norton AntiVirus software, multiple “New Folders” containing nothing) and set to work.

“Open your browser.” “OK, is that the Google?” “No, Google isn’t the browser; it’s the search engine.” We smack our heads and we try again.

There’s another level to this for me: My dad has Parkinson’s. Where most of us would be able to explain something to our parents once and trust that they could follow our directions, even if it took a while, with my dad I know that because of the cognitive issues associated with Parkinson’s, what I tell him once might not stick. And even if it does stick, he might not be able to physically make the machine do what he wants it to.

It’s far more frustrating for him than it is for me. I sat down once with him and a tablet, trying to show him how to use Google Maps. We zoomed in on the farm where he spent his summers as a child, so that he could identify the ponds where he would fish and swim, the forests where he would climb trees. I showed him how I could zoom in and out with my fingers, and yet when I handed him the tablet to try, the application closed when he pressed an errant button. We opened it again, and even the zooming function wasn’t possible with the way his brain sent signals slowly to his hands. 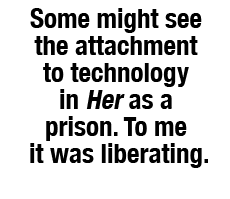 My sister and I debated the benefits of him having an iPhone versus and Android device. “iPhones are just easier,” she said. I told her, determinedly, that he needed neither, that both were equally problematic. I recently asked him if it would be OK to install the software on his computer where I could drive it for him. If he wanted to open Google Maps and explore his childhood farm, why shouldn’t he be able to do that? Why should anyone’s different ability not allow them to access the same great benefits of the Internet we have access to?

There shouldn’t be a stigma about having someone else drive the machine. What may be user friendly to one user is decidedly unfriendly to others. In the same way I don’t need to understand how my body digests food in order to eat, so too should there be a way that someone could use a computer without actually, well, using it.

I won’t pretend to know a lot about what is going on in the tech industry to develop accessible technology. What I do know is that our current expectations of people and their ability to understand the Internet and computer technology the way it’s been constructed for them is essentially inhibiting. (There is also a larger conversation to be had in all of this about the exclusion of people who don’t have access to computers at all.)

I have a problem with the fact that our Internet seems to continue to rely on an assumed familiarity with how it works. It assumes a base knowledge of capability. Instead of blowing up the number of sites intended for those who are already part of the Internet—social networks, apps for bringing more of our Internet to us in the way we expect it—why aren’t we spending more of our efforts finding ways to bring the rest of the world to the Internet? I’m not talking about trying to get my dad on Twitter; I’m talking about finding ways to get benefits of the Internet—the connectivity, the freedom of information, the global outreach—to my dad without him having to buy into whatever it is we’re currently part of, both physically and philosophically.

What if there were a way for us to drive my dad’s Internet for him and customize it to whatever he wanted or needed to do with it? Shouldn’t we be more focused on technologies that allowed all of us the same diverse access, instead of narrowing the field of vision? 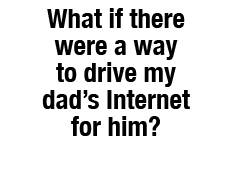 My favorite scene in the movie Her was one that had nothing to do with accessibility of technology but serves as a perfect metaphor for my idealized vision of the future of accessibility on the Internet and in technology: Joaquin Phoenix’s character takes a train out to the country and emerges from the station straight into the blissful nature of a mountaintop, without any telltale signs of the technology that brought him there. In hope for the future, just like in Jonze’s vision, we do away with the strings and wires and keys and commands that constantly remind us that the Internet is there, that computers are bulky creatures tying us to desks.

While some might see the attachment to technology in Her as a prison, to me it was liberating. We tap our ears, state a command, and let a machine do the work on an invisible level, with less intrusion on our lives, without the need for a vast understanding of how it works, without the need for constant reminders of the site you’ve joined, the app you’re using, the steps it took to get there.

I’d like that future for my dad now—but also to reassure my future self. We will all be older some day. Many of us will be older in the way that allows us to easily download books to whatever device we’re reading on at the time and flip virtual pages on the lanai of a pool club in Boca Raton, but some of us won’t be so fortunate. Some of us will have to have things read to us. Some of us won’t be able to zoom or download or understand the way things work so easily.

Why are we waiting until we get that old, or until our abilities to type and text and zoom diminish, in order to solve this riddle? I think it serves all of our best interests to work to turn that kind of future fantasy into a present reality.