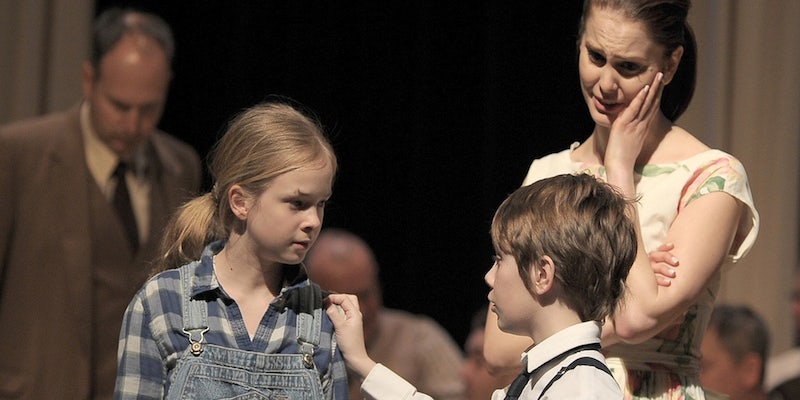 The 21st century could use its own Atticus Finches to remind us #BlackLivesMatter.

Harper Lee’s To Kill a Mockingbird was a formative text in the eyes of many white children across America, an early exposure to the racial injustice that plagues American society. The news that Harper Lee is coming out with another book, Go Set a Watchman, is a reminder that the conversation about race in America isn’t over. Lee’s work falls into the larger canon of middle and high school staples like Roll of Thunder, Hear My Cry and The Bluest Eye, all of which challenge white readers to rethink their place in society; if the reaction on Twitter is any indication, we desperately need that push in the 21st century.

Our Tuesday has been seriously made after hearing Harper Lee is to publish her first novel since To Kill A Mockingbird! #TopshopHQ

Son briefly called it "How to Kill a Mockingbird." Later, when I asked him how the bird killing was going he said: "do not mock me." #aces

In an era when black men are being killed nearly daily by police, the world of To Kill a Mockingbird doesn’t seem so far off, which illustrates why we need this book now more than ever before. It’s a testimony not just to the pernicious legacy of racism in America, but to the need to openly talk about it, rather than shuffling past it and attempting to remain ignorant.

It’s also a reminder that it’s not a conversation that people of color should be solely responsible for. Lee’s book was bold, brave, and assertive about race before #BlackLivesMatter was a part of the cultural conversation, and her work continues to push buttons. By writing in solidarity with members of the civil rights movement and pushing the boundaries for white readers, she forced the conversation into the households of people who might have rejected Toni Morrison and Mildred D. Taylor.

To Kill a Mockingbird is a powerful chronicle of a manifestly unfair and awful system, as Scout Finch’s father defends a black man falsely accused of rape who’s inevitably convicted by a conservative white jury. When Tom Robinson is sent away to jail for the crime he didn’t commit, he’s later shot by guards for trying to escape, in an earth-shattering event for the Finch family as Scout, her brother, and her father are forced to rethink their faith in the justice system.

For white children who grew up with assurances that the justice system was always fair, that trials were conducted by a jury of peers who would deal even-handedly with the case at hand, and that judges would never discriminate against the accused, the book was a slap in the face. To Kill a Mockingbird upended notions of the legal system and highlighted the fact that the color of your skin does influence what “justice” you receive, and while the book was set in the Great Depression, it might as well have been written last year, given the limited scope of social change we’ve seen since then.

The sequel intends to take readers 20 years forward, with Scout visiting her hometown and seeing how it, and she, have changed. In her usual modest way, Lee suggested that she’d never intended to publish the manuscript, but that: “After much thought and hesitation, I shared it with a handful of people I trust and was pleased to hear that they considered it worthy of publication.” While Ferguson, Mo., won’t show up in Go Set a Watchman, the fight for civil rights will no doubt be a prominent feature, and the book will be a sharp reminder of our continued racial struggles.

As ACT UP said in the 1980s, silence equals death, and keeping quiet while people die cultivates a continued culture of racism.

Readers of all races need texts like To Kill a Mockingbird to provide an outlet for learning about and talking about race in America, and such books are especially important for young readers. But the text offers something particularly unique by virtue of being written by a white author. For white folks made deeply uneasy by discussions about race, a single white voice can be taken as an authority more readily than a chorus of people of color, making it important to tread with caution when entering conversations, but staying silent carries its own problems. Sitting back to listen without also speaking out against injustice is a form of tacit complicity; as ACT UP said in the 1980s, silence equals death, and keeping quiet while people die cultivates a continued culture of racism.

Speaking on the controversy over racism at the National Book Awards in 2014, writer Daniel Jose Older noted that “retweeting is not enough,” confronting the common trend of retweeting posts by people of color but not adding any original commentary. Older noted that this reflected a mistaken belief that “amplifying voices” was enough. To Kill a Mockingbird wasn’t about amplifying voices, but about making a clear political statement. Harper Lee didn’t crib from Mildred Taylor or any other black author to write a novel about race in America. Instead, she drew from her own experiences and what she’d learned from people of color to add her voice to the discussion. She didn’t remain silent, but instead took on her role as a white woman working in solidarity with the black community seriously.

In the wake of Ferguson, numerous black commentators spoke out on this issue, arguing that the burden for carrying conversations about race shouldn’t fall on them alone. “White allies, we need your voices. We need you to say that this is deplorable,” wrote blogger Luvvie Ajayi. “Your silence does nothing and if you’re neutral on this, then you’re on the wrong side. Actually, your silence does do something. It says ‘It’s okay that this is happening.’ That hurts us all. Speak up.”

[W]hite people have a role in undoing racism because white people created and, for the most part, currently maintain (whether they want to or not) the racist system that benefits white people to the detriment of people of color. … If you don’t make a purposeful choice to become a white ally and actively work to dismantle the racist system running America for the benefit of white people then it becomes your shame because you are white and black lives matter.

She criticized the tendency to remain silent in the face of racism for fear of saying the wrong thing or feeling uncomfortable about dominating conversations, providing would-be allies with some suggestions on how to work in solidarity with people of color dealing with racism. Scores of people of color on social media echoed her commentary and concerns, asking why they were forced to deal with the problems of educating people about racism, while also dealing with racism itself.

Rather than feeling embarrassed or uneasy about being wrong, whites should use their social networks to challenge racism.

In a conversation at the Guardian, Jess Zimmerman and Rebecca Carroll took on the issue from white and black perspectives, with Carroll articulating the need for white people to speak up. She noted that rather than feeling embarrassed or uneasy about being wrong, whites should use their social networks to challenge racism, complementing the work of people of color rather than staying quiet. “Use [your] platform to talk to other white people,” Carrol argues. “If you are a racially conscious person, you are affected. You are angry. It matters.”

All of these conversations are reflections of the need for modern-day Atticus Finches, white people in all walks of life who are willing to put themselves on the line to talk about racism and force the issue for those who might prefer to leave it undisturbed. Harper Lee stirred the hornets’ nest in a book that was so compelling it was later adapted for both stage and screen, yet too many folks still don’t want to scare the horses. Atticus Finch put his life and his career on the line in an attempt to give a black man a fair trial—and decades later, America needs a new generation of young readers taught to fight for what’s right.