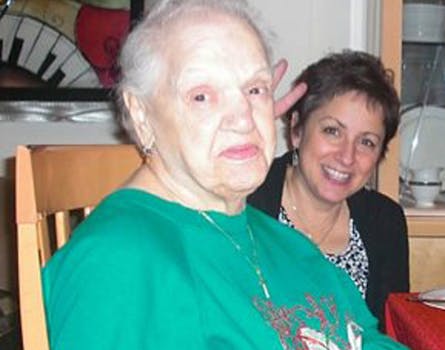 Cindy Livesy's grandmother was battling pneumonia and turned to Facebook to deliver a special birthday surprise.

A small business owner’s photo of her 97-year-old grandma Anna has gone viral on Facebook, prompting both tears of joy and confusion, as more than 50,000 people have liked it and half that number of users have offered personal birthday wishes.

Cindy Livesy, who runs the coupon-sharing site Living Rich With Coupons, thought little of it when she posted a photo of her grandmother on her birthday Wednesday.  She wrote that it “would be fun to see how many people could send birthday wishes to her.”

“She’s in a nursing home,” Livesy told the Daily Dot. “She has pneumonia, so you think she’s not gonna make it.”

Well-wishes started pouring in from all over, and they haven’t stopped in the five days since.

“People started sharing it,” Livesy added. “I honestly don’t even know why. Not only are they liking it and leaving happy birthday messages from all over the world, they’re also leaving private messages on my Facebook page. I don’t know how to make it stop!”

There seems to be little magic behind it. Comments on the photo tend to be no more complicated than simple wishes of “happy birthday.”

“I sat there on her birthday and read a bunch of them to her from my iPad,” Livesy said. “A couple of them brought tears to her eyes.”

Livesy said Anna has since recovered from pneumonia.

The birthday wishes “made her feel better,” Livesy said. “She was very happy.”

Photo via Living Rich With Coupons/Facebook