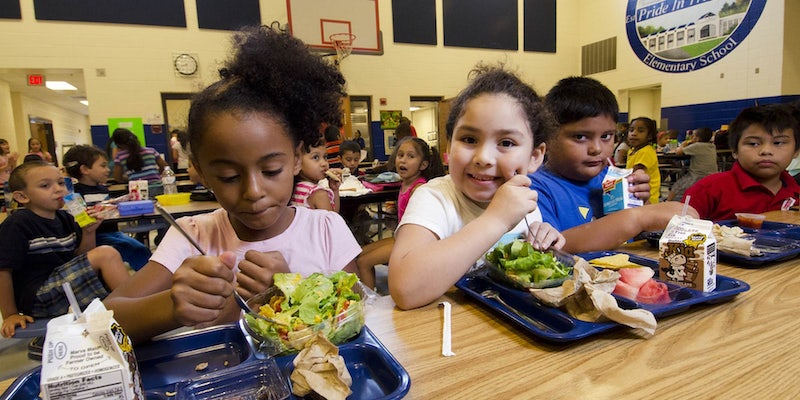 No child deserves to go hungry in school

Every child has the right to eat.

The economist Milton Friedman famously argued that “there’s no such thing as a free lunch,” but when it comes to food insecurity, it’s America’s children that are paying for it.

This May, Della Curry—the kitchen manager at the Dakota Valley Elementary School outside Aurora, Colorado—was fired from her job following reports that she gave free lunches (20 in total) to children who couldn’t afford the tab. While the school provided “cheese sandwiches” (a hamburger bun with a slice of cheese inside) to hungry students without money, Curry knew that wouldn’t cut it.

In a Facebook post dated May 29, Curry said, “I would do it again in a heartbeat. … I will never understand how one of the richest countries in the world cannot provide lunch for its children.” Her story has gone viral in the past week.

Her story is resonating on the Internet because Curry is right: Across the country, students continue to go to school hungry every day. In a 2015 report from the No Kid Hungry campaign, 76 percent of teachers said that they regularly teach students who don’t have enough to eat. As a result, many end up providing meals for students out of their own pocket—with the average teacher shelling out around $40 a month.

Instead of continuing to place this burden on educators and administrators—and then punishing them for it—it’s time to address our schools’ food crisis. America’s kids deserve free lunches.

Government programs have long attempted to solve this problem by providing limited assistance to low-income students, but the government plan isn’t nearly as effective as it needs to be. To qualify for a free lunch, the national government currently sets the income requirement at $31,000 for a family of four, a bar that many argue is simply too high. As Think Progress’ Alan Pyke explains, “more than a quarter of the nation’s food-insecure people earn too much money to qualify for government assistance yet are still unable to provide adequate food for their families throughout the year.”

Many teachers end up providing meals for students out of their own pocket—with the average teacher shelling out around $40 a month.

That requirement also fails take into account the rising economic pressures on middle-class families. In the past decade, median household income has fallen by 5.4 percent, while the cost of school lunches has continued to climb, shooting up 52 percent since 2004.

The problem isn’t just the kids who are left out of the program but that even those students who are on government assistance programs may be too ashamed to take advantage of it. Many schools have only made this stigma worse by shaming low-income students. Colorado’s Peak to Peak Charter School took to stamping pupils’ hands when they couldn’t afford to pay for food, while Barber Middle School in Texas made headlines in 2013 for tossing out a middle schooler’s meal altogether. The student’s crime? Being 30 cents short.

In addition to leaving kids malnourished, widespread hunger in schools also hurts their academic performance as kids who don’t have regular meals are prone to behavioral issues and don’t learn as quickly as their peers. “With all the hand-wringing over student test scores, school performance, and the impact of education on myriad other social trends, there’s a pretty basic truth: Give a kid a sandwich, and she or he will be far more ready and able to learn,” argues Susan Milligan in U.S. News and World Report. “It’s very hard to think clearly, let alone learn, when you are hungry.”

Milligan also explains that SAT scores are higher among students from wealthy families, because they’re able to provide children the large-scale opportunities that low-income students lack but also the basic necessities we often overlook, like the ability to buy groceries. It’s up to schools to narrow that hunger gap.

While critics might be quick to dismiss feeding the poor as “Nanny State” rhetoric, education’s hunger gap is exactly what former Republican presidential candidate Bob Dole and former Senator George McGovern (D-S.D.) recognized in their bipartisan International Food for Education and Child Nutrition Program, which was launched in 2002. The program provides food aid in the form of free school lunches to children in developing nations; this offers an added incentive for parents to send their kids to school, as it’s one meal they will no longer have to worry about.

Colorado’s Peak to Peak Charter School took to stamping pupils’ hands when they couldn’t afford to pay for food.

Despite Dole’s support, the greatest obstacle to free lunches will not be stigma in the lunchroom but in the halls of Congress. Della Curry’s civil disobedience comes at a time when red states like Kansas and Missouri are drastically reducing their state welfare benefits based on old stereotypes about people on government assistance eating lobster and steak on cruise ships.

However, a large chunk of people enrolled in Supplemental Nutrition Assistance Programs aren’t taking cruises or going to the race tracks; they’re going to homeroom. According to the USDA, 44 percent of SNAP recipients are under 18.

The connection between government welfare and school lunch programs is particularly important because states with the highest rates of food insecurity are concentrated toward the South and Plains areas, which are predominantly red. Missouri’s food insecurity rate is 17 percent, above the national average of 15.8 percent, while Mississippi, Arkansas, and Georgia (all GOP-controlled) rank in the top five most food insecure states, according to FeedingAmerica.org.

However, a number of cities are already working to combat our views on welfare and food reform for America’s neediest kids. In 2014, Indianapolis Public Schools launched a program to provide free breakfast and lunch to all students as part of the Healthy, Hunger-Free Kids Act of 2010—which, according to ThinkProgress’ Abigail Bessler, “funds free meals for students in ‘Community Eligible’ districts where 40 percent of kids at one or more schools already qualify for free lunches.” Bressler continues, “In Indianapolis, 77 percent of students qualified for free meals and just 18 percent, 5,500 students out of over 30,000, were required to pay.” Starting this week, Baltimore City Schools are following suit.

Although feeding the entire student body might seem like a heavy burden for the federal government—which reimburses districts for free lunches served to kids—it’s anything but. These programs cost school districts just 0.97 cents per student—and the price of hungry students is far steeper.

America’s school districts need to follow Indianapolis’ and Baltimore’s lead by putting food on students’ lunch tables. If every child has the right to an education, too few will be able to take full advantage of it unless we remember something just as crucial: Every child also has the right to eat. And as Della Curry reminded us, a cheese sandwich will never be enough.