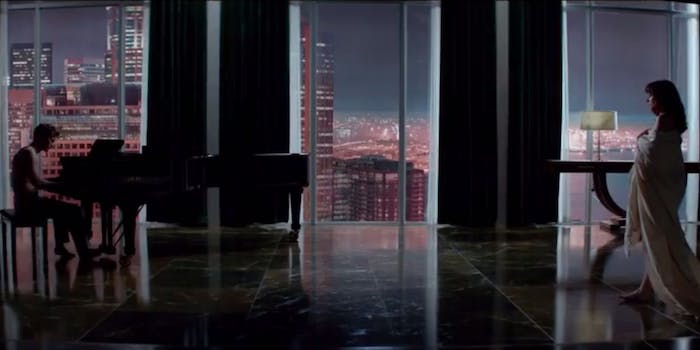 What turns Anastasia Steele on most: What's between Christian's legs or what's in his wallet?

Feminist protesters turned up at the first screenings of the long-awaited Fifty Shades of Grey, telling anyone who would listen that the film promotes the sexual enslavement of women. They weren’t wrong, but they may have been surprised to learn the true mechanism of the cold-hearted Christian Grey’s domination over his ingénue, Anastasia Steele: for all the floggers, blindfolds, and ropes in the mix, it’s his unimaginable wealth that gives him control.

This much is evident when we get our first glimpse of the “Red Room of Pain,” with the camera lingering raptly over various instruments of bondage, framing each silver chain and leather cuff like it’s an aspirational product advertised in the pages of Vogue. Somehow this ends up being more titillating than the submission itself, which is shockingly tame in comparison to, say, The Wolf of Wall Street’s sexual sadism. And where Martin Scorsese’s film ruthlessly skewers the decadence and depravity of One Percenters, Fifty Shades revels in it.

Perhaps that’s the result of trying to turn a common fantasy into a dark, unspeakable taboo: that Grey can gravely suggest his kink is “singular” when it’s shared by millions is a joke and a half (and, as with many of the script’s salacious one-liners, the audience can’t help but crack up). If we’re not overwhelmed in the bedroom, then he’ll have to impress us elsewhere. Not for nothing is “You’re the only one I took in the helicopter” meant to be the most romantic phrase in the movie, or the gift of several first-edition Tom Hardy novels—inferior versions of which Steele already owns—supposed to convey irresistible power. We see the name of Grey’s luxury dwelling so often that viewers may wonder if something important is foreshadowed by the word “Escala.”

This fetishization of wealth, along with Grey’s whiteness and good looks, also seems to be the only thing that excuses his obsessive, stalkerish behavior throughout. Viewers will quickly lose count of the times he forces entry into Steele’s apartment to surprise her in bed, as well as the little allusions to Anastasia’s relative poverty: Surely not one college student these days is driving around in a rusted Volkswagen Beetle while talking on a Motorola Razr flip-phone.

So often, too, Grey’s dopey alpha moves are an extension of his corporate life, which is also, we might add, far more mysterious than his not-so-rarefied ideas about pleasure and pain. We know that he’s a billionaire, that he can afford a dazzling if austere penthouse and the finest consumables or staff, that his firm is somehow involved in the telecommunications space…and that’s pretty much it.

The latter detail is especially curious when considering one of the film’s dumbest conceits: After a painfully metaphorical glider flight together in Georgia, Grey gets a call about an unexpected business concern and has to jet back to Seattle at once. When Steele catches up with him, he’s still on his phone, in his apartment, vaguely chastising someone—as if the CEO of a telecom couldn’t do that from anywhere he liked.

This fetishization of wealth seems to be the only thing that excuses his obsessive, stalkerish behavior throughout.

Most insidiously, there are the inklings of Grey’s backstory, which layers a “pulled himself up by the bootstraps” narrative over the fact of the immense privilege conferred by his rich adoptive family. “I had a rough start in life,” he says, shortly before indicating that he remembers essentially nothing of these traumas. Here we have another failing of Steele’s—if a crack baby can rise to the top, why hasn’t she? And will she really spurn a man who’s willing to haul her up there in exchange for her freedom?

The core absurdity of Fifty Shades is that it posits a wobbling sexual chemistry between two people who share nothing of what makes attraction a viable human enterprise. They’re supposed to be oppositely charged planets towing each other out of their respective orbits—she doesn’t want to be a slave, he doesn’t want to be a lover, and for two hours, we watch them meet clumsily in the middle.

But why? Grey seems to derive a rush from of Steele’s prickly hesitance, it’s true, but no relationship has ever thrived on mixed messages. Steele, meanwhile, seems to actively dislike her paramour, except in the moment she realizes she can’t endure as his toy, at which point she inexplicably declares her love. Again and again, it’s Grey’s status beyond the boudoir that brings her back into it; along with his money comes the ability to follow her anywhere, buy her anything, and pay anyone off. The interminable negotiations over the BDSM contract—a document at once the movie’s MacGuffin and albatross—practically screams for this reading, as it translates physical intimacy into business jargon.

Along with his money comes the ability to follow her anywhere, buy her anything, and pay anyone off.

Don’t take my word for it, though. Just ask yourself a simple question: Would a story about a poor but psychologically controlling farmer who likes tying up girlfriends and whipping them in a barn have had the impact on our nation’s consciousness that Fifty Shades has? More likely it would have been written off as mere smut.