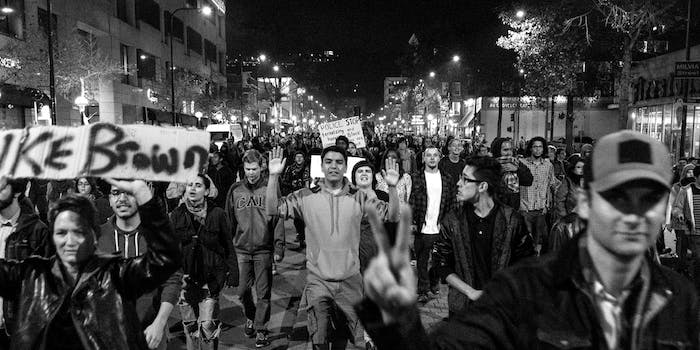 Ferguson has unearthed many ugly truths, important realizations, and lessons to be learned.

The uprising in Ferguson, Missouri was more than a moment in time. It was the spark that ignited a movement. The August 2014 shooting death of Michael Brown, roughly one year after a Florida jury acquitted George Zimmerman in the murder of Trayvon Martin, awoke much of mainstream America to the harsh realities of living while black.

Organizers and activists coalesced through social media, using their online platforms to raise national consciousness and organize protests against issues of police brutality and rampant racism in major institutions, including law enforcement. Many of them, and others who joined along the way, shared what they’ve learned from Ferguson until now, taking to social media on the anniversary of Brown’s death with the hashtag #FergusonTaughtMe.

In the past year, thanks to the efforts of advocates and supporters, a country was pushed to no longer ignore racism and police brutality, but to pay attention for longer than the 15 seconds most issues get. Brown’s extrajudicial killing wasn’t an isolated incident, it was indeed part of an ages-old trend of police abuse against black people, an issue the Black Lives Matter movement has ensured no one will soon forget.

Just as #BlackLivesMatter champions continue making notable gains—including polling data that shows more Americans are developing increased awareness of racial issues—the developments since Ferguson have unearthed many ugly truths, important realizations, and lessons to be learned. Here are but a few key reflections from #FergusonTaughtMe.

1) There is no such thing as a post-racial America

#FergusonTaughtMe that the expectation of calm acceptance in the face of oppression is a violent expression of white supremacy.

When issues of race arise, some ask the question, “Why do people keep making everything about race?” as if racism died out in the 1960’s and ‘70s. Although the Civil Rights Movement made many gains, racism is not over. For those in Martin Luther King’s era, slavery became segregation, sundown towns, and lynchings.

And when activists pushed for political change on those fronts, social and institutional racism became less overt and more subtle. On top of continuing economic barriers to success, one of the many ways racism persists comes through racial profiling and implicit biases that result in police harassment, arrests, and the killing of unarmed black people—people like Michael Brown.

2) The mainstream media has an issue with anti-black bias

#FergusonTaughtMe that it is possible to demonize murder victims & lionize murderers.

#FergusonTaughtMe that cops can lie and corporate media can spin, but people still know that justice has not been served.

When black people are victimized by police, the news media continually struggles with how to talk about it appropriately and respectfully. For example, in a report shortly following Brown’s death, a New York Times story called the 18-year-old “no angel,” alluding to the unarmed youngster’s past behavior as a plausible factor in his eventual murder.

And as highlighted via the hashtag #IfTheyGunnedMeDown, some news stories choose images of black victims that may reinforce racial biases and tropes, rather than choosing a photo that reflects the person in a neutral or positive light.

The same implicit bias is illustrated in the coverage of cases of peaceful protest. Even when rioting wasn’t the entire story, the media declares a “state of emergency,” creating a riot by obsessively focusing on any looting or instances of violence. It reflects the mainstream media’s routine failure to capture the stories of community members pushing back against injustice, as well as representing the overall lack of diversity that plagues news media.

3) The police don’t “serve and protect” everyone equally

#FergusonTaughtMe that keeping order for the privileged is more important than constant harassment & brutality of the marginalized.

Racial biases in law enforcement makes white people a protected class, while black people are disproportionately targeted for stops and arrests. When 911 callers report that black people “look out of place” or “suspicious,” those “suspects” get accosted by police—even when they aren’t doing anything wrong.

It also means children are treated as adults by law enforcement, rather than as young people, and as the case of Tamir Rice shows—a 12-year-old who was gunned down in Cleveland—that treatment can have deadly consequences. Black people are more likely to be killed while being apprehended for any crime, violent or not, than their white peers.

This reality is what informs the widespread distrust of police officers among black people. We understand that the police don’t always work with us—they work against us.

#fergusontaughtme We will not get justice until we take it

There’s an old saying that “justice is blind,” but history shows that justice in America indeed sees race—and often sees black people as undeserving of equity or due process.

Officers in the cases of Brown’s and Eric Garner’s deaths weren’t indicted, and the men who killed Martin and Rekia Boyd were found not guilty by juries. Many other cases are still pending investigation or trial, but the number of times officers are held accountable by the law pales in comparison to how often they get away. It’s part of why many are skeptical about how the justice system operates, calling for reforms and federal interventions to ensure fairness in the process.

5) Ignoring issues of racism doesn’t mean they will disappear

#FergusonTaughtMe that the safety in silence is an illusion.

#FergusonTaughtMe that racism unchecked is racism condoned. It is my duty to call out racism when it manifests in its many ugly forms.

Bringing up the topic of race in America causes severe blowback for those who raise the tense and often divisive issue, even when it’s clear and present, and for many, it’s easier to stay silent. But by ignoring issues of race, the matter only gets swept under the rug.

For many black people, this apprehension and fear is very real. Speaking out could result in conflict in their personal relationships—especially with people from differing racial backgrounds—and they could be accused of making a big deal out of nothing. They’re just another “angry” black person. In the face of racism, white supremacy requires silence—not only as a means of survival, but also to allow America’s system of racial privilege to quietly sustain itself.

However, silence often means complicity, especially for white people who benefit from institutional racism. The resulting conversations stemming from Ferguson have underscored the importance of discussing race openly and honestly.

#FergusonTaughtMe that social media has given us organizational tools our ancestors would have killed for. We have the power now.

#FergusonTaughtMe it only takes 4 days to mobilize 250,000+ ppl in 42 states and 5 countries into action. pic.twitter.com/1dlGWmvGX4

Before the mainstream media picked up the story of Brown’s death and the resulting protests, activists used all social media platforms available to make his death an issue.

Communities gathered over numerous hashtags to have important discussions about racial justice, to hold the media accountable, organize demonstrations, and build a widespread network for a movement that’s arguably picking up right where the Civil Rights era left off. It’s allowed #BlackLivesMatter activists and supporters to connect with each other in ways their predecessors couldn’t and helped them keep issues of race and policing on the national agenda.

Although as Feliks Garcia noted in the recent protests at a Bernie Sanders rally by BLM supporters, those disruptions might make us uncomfortable, but by demanding to be heard, #BlackLivesMatter is forcing a conversation that’s long overdue.

#FergusonTaughtMe that we are part of a long tradition of Black resistance! #Squad #UnitedWeFight pic.twitter.com/CeiG6kB8Ox

#FergusonTaughtMe that citizens in the streets can wake up a nation.

The Ferguson protests, the National Moment of Silence, the Millions March, the #BlackBrunch interruptions, and even Tia Oso’s intervention at Netroots Nation—all of these actions stem from principles of civil disobedience rooted in the Civil Rights Movement. Since Ferguson, a new generation of activists have taken those timeless strategies, updating them for renewed relevance for a similar but different set of struggles against racism.

No single spokesperson exists as the go-to leader and movement exemplar, as was often the case with King during the 1960’s. Whereas some critics charge that it means today’s movement is leaderless, there’s another way to understand what’s happening—the approach highlights that the movement’s brimming with leaders of different strengths and abilities.

There’s indeed a rich legacy of civil rights advocacy present in today’s movement—one that shows no signs of slowing down anytime soon.