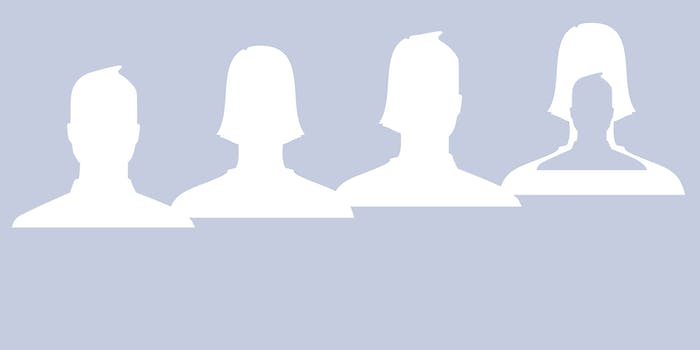 By asking users how they identify, Facebook started an important conversation on identity—one we should all be listening to.

Just over a week ago, Facebook expanded its selection for gender options in its user profiles to include more than 50 options beyond the previous alternatives of “male” and “female.” The purpose of the new list of gender alternatives is to provide options for people who do not clearly fit into either of those categories.

This includes transgender people, as well as those who are non-gender (including agender and androgynous people), along with people who are a combination of both genders (bigender), those who move back and forth between genders over time (genderfluid), and those who fall outside of the male-female dichotomy entirely (including gender non-conforming and genderqueer).

In doing so, Facebook single-handedly boosted transgender awareness. But the issue at stake isn’t gender per se. It’s bigger than that. It’s identity.

The reaction in the media was exactly what we have grown to expect whenever the public is forced to acknowledge something that we, as a culture, feel uncomfortable with.

There was a great deal of support for the initial announcement. Many social and political activists applauded the change as a move that celebrates differences and diversity, and makes life much easier for people who do not cleanly fit into the “male” and “female” constructs.

But many media outlets reacted more with nervous humor, acknowledging that it is a positive step in allowing people to define themselves, while at the same time taking an opportunity to poke fun at the “strangeness” of some of the options. Many in the media focused special attention on the Native American category “two-spirit.” These articles came across either as an honest attempt to educate the public about cross-cultural perceptions of gender, or as a teeny bit racist (“look at what those crazy Native Americans think!”), depending on exactly how they were written.

Because of Facebook’s massive popularity, however, an enormous number of people who usually don’t think about gender were introduced to the issue. The move brought into the public eye ideas that have been available for a long time to those interested in gender studies but that much of the population simply never came into contact with.

For people who are sensitive to these issues, none of this information is new. But Facebook can be credited with starting this conversation with hundreds or even thousands of people who simply had never had a reason to think about gender issues before.

After a short initial wave of enthusiasm and education, however, there was the expected backlash. Some people were concerned that having more than 50 options was just a bit much. A pundit on Fox News sarcastically wondered whether Facebook might as well include “pinecone” or “chicken” in the list of alternatives. One Guardian op-ed cynically suggested that the only reason Facebook added so many options was to improve its targeted marketing, and that it would have been braver to remove gender selection entirely.

Even some of those sympathetic to the trans community complained that this focus on labels was nothing more than political correctness gone crazy. As Drew Magary wrote for GQ magazine: “There is a point when you can go too far in demanding how we change our language or our basic social customs, when you can make people feel as if they’re being over-accommodating. And when that happens, you risk turning away more people than you attract. Facebook doesn’t need 50 gender options. It needs a blank space you can fill in as you please. Otherwise, even the most tolerant individual will start rolling their eyes.”

This backlash, focused entirely on the issue of gender, misses the key reason that having multiple options available on Facebook is important in the first place. The only reason gender options on Facebook matter is that Facebook has become an integral tool that people—especially young people—use to explore and shape their way they understand themselves and their relationship to the world around them.

In the bigger picture, the way that Facebook lays out its profile options matters to every single person who uses Facebook, regardless of that person’s gender.

Let’s take a step back for a moment and think about the world in pre-Facebook times. Perhaps the most iconic symbol of a young person’s identity is a teenager’s bedroom. Posters on the wall. Music, and maybe books, on the shelves. Clothes on the floor. Every single one of these items is chosen specifically as a way of saying: “This is who I am! This is the kind of person I am.” I wear black clothes, not pink clothes. I listen to Broken Bells, not Miley Cyrus.

For many decades, the young person’s bedroom has been a symbolic “personal space” for expressing and solidifying a sense of identity. Social psychologists have known this for a long time. In a 1994 paper, “Teenage Room Culture: Where Media and Identities Intersect,” Jane Brown and her colleagues discuss the fact that young people “actively and creatively sample available cultural symbols, myths, and rituals as they produce their identities.”

To put this idea in day-to-day terms: You discover and define who you are by looking out into the world, and selecting those things that resonate with you. You pick out a type of music, or a style, or a book, and you say, “I feel that. I get that. That is who I am.”

This is something that all people do, both young and old. All human beings define themselves by what groups they are a part of and what groups they are not a part of. This process of “creating a self” is most apparent in young people because they are still struggling to explore and decide who they want to be.

The Facebook profile has taken over the role of the teenager’s bedroom. It is simultaneously a “personal space” and a “presentational space.” It is symbolically private but also public in that it can be used by people to tell the world “this is who I am.” Your “self” can be viewed as a kind of performance that you constantly enact towards other people in order to reaffirm the type of person you are and the type of person you want to be.

This is why many people spend hours and hours carefully going through and liking hundreds of albums, artists, books, athletes, and sports. Privacy activists bemoan the fact that so many people over-share their interests on Facebook because they know that Facebook is mainly interested in this data for marketing purposes.

But that isn’t why people feel an almost compulsive need to click on that Like button. The reason people spend hours of their lives classifying and sorting all of their tastes on their profile is that it becomes an external symbol, something they can present to themselves and to the world at large, for who they are. Regardless of Facebook’s motivations, there is a very personal reason that you choose to display Imagine Dragons rather than Justin Bieber under “Music” on your Facebook profile. It is symbolic. It is a statement about the type of person you are.

This applies to everything on a person’s Facebook profile. Facebook has provided an incredibly broad array of options for people to express and identify themselves in any number of walks of life: political affiliation, religious affiliation, membership in organizations, and tastes in media and sports. If it is important to you that people know that you love hockey, then you can make that “Facebook official” by having hockey appear as one of your interests on your profile. The same goes for almost anything else.

So why shouldn’t it also apply to something as personal and important as a person’s gender? If you are a member of the Pentecostal church, and that is very important to you, imagine how you would feel if the only options available under “Religious Views” were Catholic, Jewish, and Other. It might not be enough to get you picketing in the streets (it is only Facebook, after all); but surely you feel more comfortable being able to tell the world more specifically about this part of your life that is important to your identity, and that makes you who you are.

That is the real story behind Facebook’s gender options. It’s a way to allow trans people to make their gender “Facebook official,” but it is also more than that. It’s not just about gender; it’s about people being able to tell their story. That isn’t something that only impacts a “small number of people.” It impacts everybody—because everybody has a story to tell.