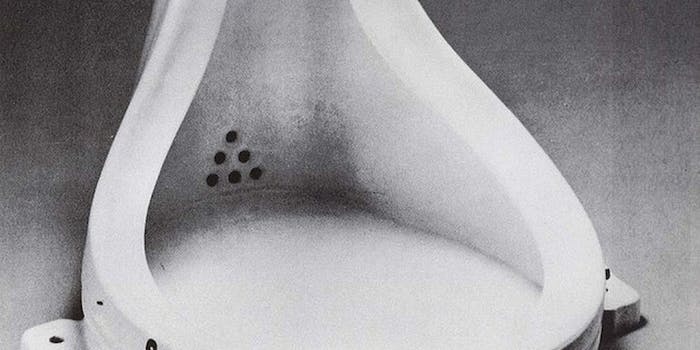 "Wasting" time—the provence of the Internet and great art alike. Who's to say which is which?

The fact that there was a recent, well-attended LOLcats teh Exhibishun in London suggests that they are indeed.

But are they really? How? Why? After the richness and iconoclasm of the 20th century in art, from Pollock to Rothko, who’s to say for sure?

There is an impulse to reject the notion that LOLcats might be art simply because so many of them are crap—or, perhaps more snobbishly, that they are too popular to be art. Yet even now, if you stroll down the Seine you will find dozens of painters working on another impressionist version of Notre Dame. And yes, they are all crap, and no, the next Monet is not there.

Still, popularity is part of art, and great artists have made careers playing with that idea—Warhol, Lichtenstein. Are LOLcats Pop art? Not quite. LOLcats, unlike most art, require little or no technique. And Pop Art implies an artist—one who is observing, critiquing, commenting in some way on popular culture. Even the most unusual and distinctive lolcats, however, usually have no “author,” let alone one who is intentionally crafting a cultural commentary.

It may be most accurate to say that LOLcats are the flotsam of the Internet, left behind by the surf of the great collective. Perhaps every 99th one is suddenly, perhaps accidentally great. Maybe they are found art. They are certainly outsider the art establishment, that’s for sure.

In all seriousness, LOLcats teh exhibishun is another version of that eternal question, “What is art?” It’s the same question that Greenberg asked himself, that Gombrich wrote about, that has been at the heart of modern and postmodern art since Duchamp submitted a urinal to an art show that promised to accept all comers (only to have it rejected).

It never has a particularly satisfying answer; it’s the asking of the question that’s important.

This month we launched a new section that we’re calling LOL. It’s a place for us to focus on and collect all our coverage of LOLcats and everything else in that vein. The Daily Dot is a serious newspaper, but our mission is to tell the story of the Internet. If all we ever do is write about the significant and ignore the silly, we are leaving out an enormous part of that story.

The Internet is nothing if not silly. Yes, it has helped topple dictators, has cost others their freedom, some their lives. But the reality is, most of the time we’re on the Internet, we’re just screwing around.

So, how has the Internet been wasting our time for the last two weeks?

Well, for one thing, we’ve been having fun with bronies (and btw, if you still don’t get that whole brony thing, read this). Ever wanted a brony Jack Sparrow, Joker, or horseman of the apocalypse? Etsy’s got you covered.

Thanks also to the Internet, you can experience the greatest sights of the American road without ever leaving your laptop—try out street view for your next road trip.

What about the shocking trip of a meteor that hit Russia? Was it a meteor, or was it nyan cat? Fortunately, @jakefogelnest was on the scene, registering @russiameteor before someone could turn it into another annoying parody account.

On President’s Day, we were celebrating our leaders’ least leader-y moments in GIF form.

And of course, there were plenty of cats. If you think your pet has what it takes to be Internet famous, have a look at our guide to feline fame.

Then, of course, there was the pope. After the supreme pontiff’s shocking resignation, Craigslist began accepting applications for the position, Wikipedia’s page listing the most sexually active popes came to the fore, Twitter erupted with amateur comics, and similarities between the pontifex maximus and the galactic emperor were uncovered (along with many other memes).

That’s a lot of silly.

As easy as it is to dismiss the fluff, there’s a lot of important stuff going on in it. Fluff matters. When we look at LOLcats on the white walls of a gallery, we tend to ignore the people, the ones who made them and the ones who read them. To approach Internet memes as so much driftwood on the beach is to remove the humanness of them. They originate, after all, in a desire to amuse our friends. They are performative and participatory. Therein lies their importance.

Great art emerges from “wasting” time, even sometimes from trading dirty jokes in a bar (Shakespeare can tell a damn good dirty joke).  It’s about somehow engaging the important issues of the day. And you know what? If you’re making fun of the pope, you’re engaged with the simple fact that the world changed that day. You may not need to leave the laptop to see the world’s largest catsup bottle anymore, but you’re also not just sitting on the couch.

In my experience, the same people who tell jokes at the bar are also the ones who turn the conversation to weightier matters like politics, philosophy, current events, and art. They may be sitting at a bar at 3pm, but they are engaged with the people and the world around them.

Maybe the participatory, and yes, frivolous nature of the Internet is just what we need.