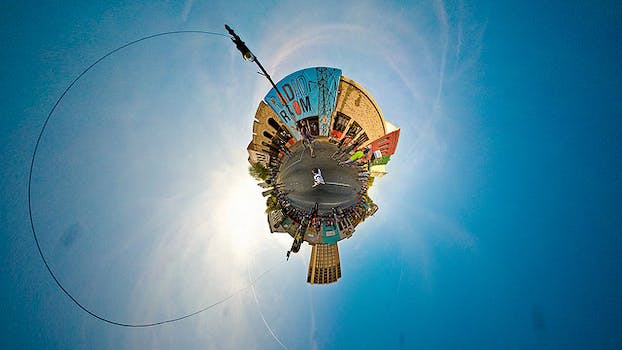 Anything is possible (especially at SXSW)

SXSW is changing the world. And it has a particularly special place in the heart of all Daily Dotters.

The Daily Dot would not exist today if I had not gone to the South By Southwest five years ago.

For those of you not familiar with SXSW, it is a film, music, and interactive conference/festival/happening in Austin, Texas, every March. The interactive portion is often called Spring Break for nerds. While it is now many things—a technology event, a marketing event, a product exhibition, etc.—it is first and foremost about online startups. It is where many of the people who create the Internet that we all use come together to drink Lonestar and eat barbeque. It is not the only such event, but it is the broadest.

Several specific occurrences happened at the annual tech conference that set in motion the sequence of events that led to the founding of the Daily Dot.

When I first came to SXSW, it was at the suggestion (and invitation) of my friend Josh Dilworth, who would later be one of my cofounders. It was there, through Josh, that I first met Nova Spivack, one of my other cofounders, and Zach Richardson, our last cofounder, to whom I was introduced at my third SXSW.

SXSW led to the founding of the Daily Dot through means much more profound than even by simply facilitating those particular circumstances. Looking back, I realize that it was the moment I began to truly learn what the Internet was all about—and to fall in love with it. SXSW is the weekend that the Internet gathers in Austin, and as such, it embodies the Web and reveals its nature—and its greatness.

At the time of that first SXSW, I was about to become vice president of audience development at a group of community newspapers in Ohio and Michigan. I knew the old-guard media intimately. I grew up in the newspaper business. I’d worked my way up from cub reporter, and opened my big, dumb mouth to complain about our website enough times that I was now being put in charge of figuring out how we were going to adapt to this whole Internet thing (which, we were beginning to suspect, might not be a fad).

I had been to an awful lot of newspaper industry conferences and had gotten to the point where I was hearing the same stuff over and over (Should we have comments on stories? Really? And should they be anonymous? Really really?) Being a journalist at heart, I wanted to see the full picture. I decided to get the lay of the land from the point of view of the disrupters, not just the disrupted.

So I came to SXSW, and it changed my life.

More than anything, it opened my eyes. I was immediately struck by the spirit of excitement and optimism that pervades the event. At the legacy media events I had attended, there was a feeling of poorly repressed trepidation. And the prevailing strategy wasn’t bad, really, but it wasn’t exactly inspiring. Everyone was implicitly asking, what must we do to survive in the Internet age? They were being dragged into the present, let alone the future.

At SXSW, the desire was to create the future. The subtext of every interaction was a pervasive belief that we had been bestowed a technology capable of opening up new worlds—one that gave us the opportunity to solve our problems in new and better ways. Most of those potential solutions would probably fail, but the few that succeeded would make our lives so much better that the cost of failures would be negligible.

In other words, while the executives in the media industry were trying (uncertainly) to adapt to the Internet, the nerds at SXSW were asking, how do we take advantage of the Internet?

The zeitgeist of SXSW is that not only is anything possible, but anyone can do it. That’s the second thing that SXSW opened my eyes to.

The conferences I was used to going to were dominated by grey-haired men running companies that had been in business for decades, if not centuries. My own family’s company has barely missed a day of publication since 1822. But SXSW is not the antithesis of that. It’s not just about the young and new in opposition to the old and hide-bound. 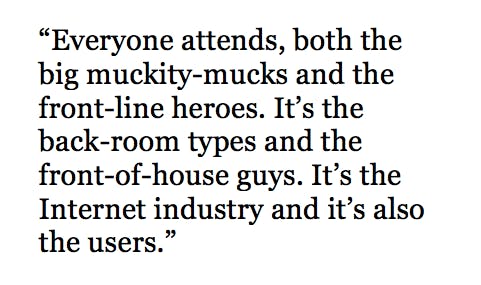 The mood is that all people, at all levels, are welcome to come and try to take advantage of the opportunities of the Internet in any way they’d like to. Start a company, start a new job, start a new way of doing your job—heck, just start a blog.

Turn your head as you sit in a panel and you’re likely to find a white guy in his 50s working for a startup on one side and a young black woman in her 20s shaking up an original member of the Dow on the other.

You can be young or old, experienced or n00b. It doesn’t matter. All that matters is what you can share: new ideas, new practices, new technologies, new perspectives, a new impact on the world.

For a long weekend once a year in Austin, you get to actually see the person on the other side of the screen. You get to see that person a lot, in many different guises, but seeing so much of him and her brings the earth-shattering power of the Internet into high relief. Because the truly amazing thing about the Internet is not the technology itself, but what the technology enables: a community that does not accept the status quo; that believes that we can make something better; and that welcomes all comers.

As someone not content to let things lie, as someone who thinks we can do better, and who has always been anxious to help—whether I’m qualified or not—I found the spirit of the Internet community I discovered at SXSW deeply inspiring. And two years after that first SXSW, when Josh came to me with Nova’s idea to create the community newspaper of the Internet, I leapt at the chance to contribute to that future in the way that I, as a journalist, can. I believe that it was a similar impulse that inspired Zach to sign on to our crazy endeavor as well.

Just as writing made the first democracy possible in Greece, and the printing press made democracy at scale possible in Western Europe and America, the Internet brings us the tools to realize the ideals of inclusion and empowerment to a degree never before possible and to do so around the world.

But it’s up to us to use the tools. The stylus and the printing press do not wield themselves, and neither does the Internet. The Internet needs its Theseuses and Platos, its Madisons and Lockes. They are emerging now. They might be at a party or panel this weekend in Austin. One of them might be you.