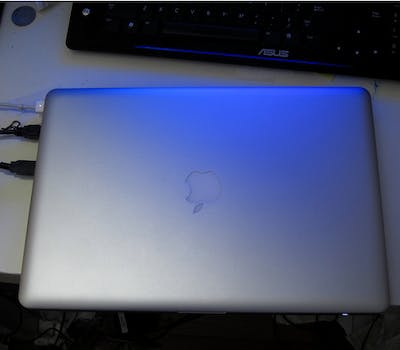 British animator Dom Deltorto has issued an apology a day after his single-serving Tumblr—”Dom’s Laptop is in Iran”—went viral.

British animator Dom Deltorto has issued an apology a day after his single-serving Tumblr—”Dom’s Laptop is in Iran”—went viral.

On Feb. 4, Deltorto’s London home was burglarized. The thief made out with his iPad and Macbook Pro. What the criminal didn’t know was that Deltorto had installed “Hidden App” on his laptop, a piece of software that uses a GPS tracker to tell the owner where his or her stolen device is located.

Hidden App also secretly takes real time photographs of the robber and sends them back to the original owner.

That’s exactly what happened in Deltorto’s situation, except that there was a catch. His Macbook Pro ended up in Terhan, Iran, more than 3,300 miles away from London.

With no real hope of ever retrieving his laptop, Deltorto launched  a single-serving Tumblr where he uploaded photographs Hidden App took of the alleged thief. Deltorto hoped that the blog would eventually lead to him getting his Macbook Pro back, but mostly he did it to amuse himself and his friends at the expense of the computer’s new owner.

But then, in a span of a day, the Tumblr got big. The story was picked up by multiple media outlets. It eventually got the attention of one of Deltorto’s unwitting subjects, who was apparently mortified to find out she was using a stolen computer.

As a result, the British animator felt a pang of regret and took the images down, replacing them with two apologetic posts.

In the first one, Deltorto indicates that he initially started the Tumblr as a joke for him and his friends, but then it got too big for its own good. He also admitted that he didn’t take the Iranians’ privacy into account.

“As the story circulated, I started to receive messages from concerned individuals warning of privacy issues and the possible harm and distress the blog may cause the people in the photos,” he admitted. “I hadn’t really considered any of this, as I hadn’t expected the story to get so much attention.”

“Then one of the people in the photos contacted me and asked me to remove the pictures. They were very upset. I could understand why.”

Deltorto also stressed that the people in the photographs were not thieves and that, although he still misses his Macbook Pro, “[the] safety and well being of private individuals is more important than any possession.”

In his second note, the animator pointed out that the Iranians, upset by the attention, insisted on returning the laptop. Though Deltorto appreciates the gesture, he didn’t take them up on their offer.

“Given the huge error of judgement on my part in sharing the story and failing to respect their privacy I have asked them to keep it by means of an apology,” he concluded.

In the end, the story of the missing laptop has a somewhat happy ending—Deltorto is still sans his expensive Apple devices— but how did the Macbook Pro end up more than 3,300 miles away?

The most likely possibility is that the actual burglar who broke into Deltorto’s home fenced the device by selling it to someone who then sent it to Iran to be resold.

That would explain why Hidden App, which requires an Internet connection to work, didn’t start sending Deltorto any information until the computer was used again, nearly a month after the theft.