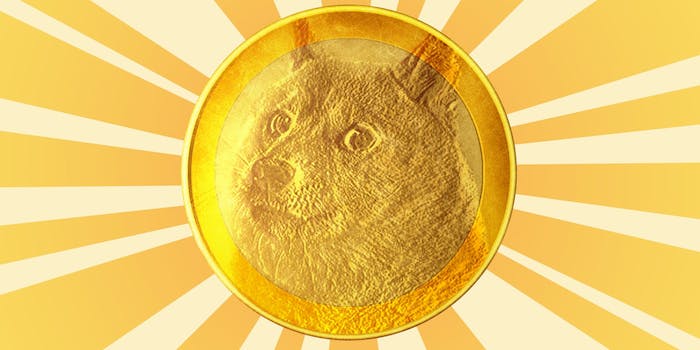 How Dogecoin changed my perspective on cryptocurrency

If Dogecoin is absurd, then so is the entire financial system.

I have long been a Bitcoin hater, for many reasons. But then, a fortnight ago, something happened. Dogecoin came into existence, and for some reason, I just couldn’t get mad about it. After some thoughtful self-evaluation this week, I’ve realized that Dogecoin has actually reversed my position on cryptocurrency. Here’s why: basically, I’ve come to see Dogecoin as an absurdist art project, mocking the entire global financial system.

Okay, maybe I’m taking something that’s silly way too seriously. Do I really believe that sentence? This question was key for my own understanding of Dogecoin and where it fits into the world. It’s the first question many people ask when they first hear about Dogecoin:

Wait. Is Dogecoin a real thing?

Searching for “is dogecoin real” on Twitter reveals a lot of people who harbor the same confusion. Here’s the thing: if you are confused if Dogecoin is ‘real’ or not, you’re basically on a wild ride. Critically investigating the “realness” of Dogecoin leads you to realize that it’s basically just as “real” as “real money,” whatever that means. And if Dogecoin is absurd, then so is the entire financial system.

Dogecoin as symptom of the postmodern condition.

Wait, let’s back up here. What do I mean when I say Dogecoin is “just as real” as, let’s say, the euro? And in economics, most questions end up leading to “What is the meaning of ‘value’?” It’s one of the most fundamental questions of the field. And there are many different positions. For the purposes of this post, I’m going to explain things from the perspective of the “subjective theory of value,” which is arguably the most dominant explanation of value in the field today. I’m painting this concept with a pretty wide brush. Please note two things: I’m not an economist by training, I just enjoy reading lots about it, and I don’t subscribe to the subjective theory of value. That said, I am trying to represent it as accurately as possible in this post.

The simplest formulation of the subjective theory of value is this: Something has whatever value a person says it has. Put another way, my coffee cost $3 because a bunch of people all agree that it’s worth $3. I, as an individual, have goals that I want to accomplish. In this case, it’s to write this blog post. To accomplish this, I made a rational decision: make some coffee at home, or go to the coffee shop. I have various resources that allow me to accomplish this goal, namely, that I have three United States dollars. So I take all the information that’s available to me, and make a decision: three dollars is a pretty small amount of money to me (I’m lucky in this regard), I don’t have anything else I need to do at home, the coffee shop hasn’t changed its prices at all in the last week, so I can be pretty sure it’s still $3. So I decide that getting out of the house is worth at least three dollars to me, and I got exchange my 3 USD for one latte. You can see how endlessly complex this is: If I had chronic pain, for example, I may not want to walk down the steps, so that changes my decision. Maybe I needed to do laundry at home, so staying at home and drinking regular coffee makes more sense. I can’t make a latte at home, so maybe I get out of the house anyway because I’d prefer it to black coffee today.

Anyway, that’s it. Seems pretty simple, right? So what about Dogecoin?

Well, if you think about my example more, I actually have a number of commodities that I’m using to exchange with others to achieve my goal. For example, I also ate a sandwich here at the coffee shop, so I actually spent $6, and that’s partially because I didn’t have any food at home. The coffee shop I went to has good sandwiches, so I chose it over other places that may also have decent lattes. So in my example, I’m trading $6 USD for a latte and a sandwich, and for the right to sit here and use up a seat and some wifi. The woman working behind the counter is trading her time and labor for a wage paid by the company who owns the shop, and the company is trading some coffee beans, a bagel, and some other things with me, through the woman, in exchange for my money.

TL;DR: buying a cup of coffee is surprisingly complicated.

Okay, so now that you’ve seen there are way more commodities involved in this transaction than just USD, why is USD special? If this scenario played out in Paris, I would have been using euro instead of USD. There’s no inherent reason that a piece of paper has a certain amount of value. There is a subjective reason, though: namely, that a large enough number of people agree that USD is a worthwhile commodity.

Everyone agrees that dollars are worth something, and we trade them all the time. They’re really easy to trade. I don’t know of any coffee shop near me that takes euros, so even though 1€ is “worth more” than $1 USD, the euro note I have in my backpack is basically useless for me to get some coffee. Economists call this property “liquidity,” and it basically means “how easy is it for me to get what I want with this commodity.” USD is very liquid. euro is very not liquid, unless I deposit it with my bank, which will exchange those euro for me for USD, which I can then trade for my coffee. Most discussions around the “realness” of cryptocurrency are really arguments about its liquidity. Bitcoins aren’t real because I can’t buy anything with them. Really, liquidity is the aspect that matters to most people when it comes to basic financial transactions.

This brings me to MtGox and CoinBase. These two companies are the biggest things to happen in cryptocurrency, and that’s because they significantly improve the liquidity of Bitcoins. MtGox is a place where you can trade bitcoins for USD. As soon as you have an exchange like this, your bitcoins now become incredibly more liquid: you can always trade some BTC for USD, and then trade USD with… anything. Coinbase is an online wallet that allows you to store bitcoins, but more importantly, it provides liquidity to the BTC market because it allows merchants to “accept bitcoins” without exposing themselves to the risk of Bitcoin’s price fluctuations (this is called ‘volatility’). As a merchant, I can integrate with Coinbase, and someone can, upon checkout, pay with their Coinbase account. It’s sort of similar, from the perspective of the buyer, as paying with your PayPal account. Anyway, here’s the crucial bit: Coinbase then instantly converts the bitcoins to USD, and then gives the USD to the merchant. This is incredibly important for the future of Bitcoin. By allowing merchants to not worry about the fact that their customers are paying in BTC, it means that more of them will “accept bitcoins,” which increases bitcoins’ liquidity in two ways: first, that they can buy more things in BTC “directly,” as well as adding a healthy amount of orders on the various marketplaces, which helps stabilize the price.

I haven’t said the word “Dogecoin” in a while, so you’re probably wondering where I’m going with this. So here’s the thing: As long as BTC and USD can be exchanged easily, it allows for a significant opening for all other cryptocurrencies. This is because BTC is incredibly liquid when it comes to other cryptocurrencies: there are a number of exchanges that will trade whatever kind of the cambrian explosion of cryptocurrncies you want for BTC. Basically, BTC is sort of the ‘world reserve currency’ of cryptocurrencies. So as long as the link to the ‘real world currencies’ exists, they can cross the gap. Imagine a “Dogecoin VISA,” a credit card where I hold a balance in DOGE. When I go to buy something with my Dogecoin VISA, the backing bank would query the DOGE-> BTC -> USD rate, and then ship the merchant that many USD, and debit me that many DOGE. What if I want to trade EURO for DOGE? EURO -> USD -> BTC -> DOGE. Done. The weakest and most tenuous link here is the BTC <-> USD bridge. As long as it’s maintained, cryptocurrency is liquid, and therefore, “real.” Furthermore, the entire financial system can be re-built on the cryptocurrency side of the bridge, as well. Imagine a site that allowed you to “Dogecoin IPO,” listing your stock on the DSE (Dogecoin Stock Exchange). TWTR -> USD -> BTC -> DOGE -> MYCOMPANY. First step is on the NYSE, second step is on MtGox, third step is on Coinedup, fourth step is on the DSE. It all works. Here’s the truly scary thing: we heavily regulate the finance industry, because when we don’t, bad things happen. Hell, when we do, bad things happen. As long as cryptocurrency isn’t taken seriously, it too, will remain unregulated, which allows for a massive extraction of wealth. The cryptocurrency community is largely made up of people who have no idea what they’re doing, and people who do know what they’re doing are starting to notice. It’s all of the worst, most predatory aspects of the global capitalist system, without any consumer protection.

So the statement that Dogecoin poses to us is this: If things really are worth whatever anyone says they’re worth, so are memes. Do we really want to live in a world where a dumb joke about dogs that can’t talk has the same legitimacy as money? Because the more people that take Dogecoin seriously, the more serious it becomes… and the very nature of its silliness encourages us to think seriously about the nature of money and therefore value.

Before, I just laughed. Now, thanks to a joke, I’m scared.