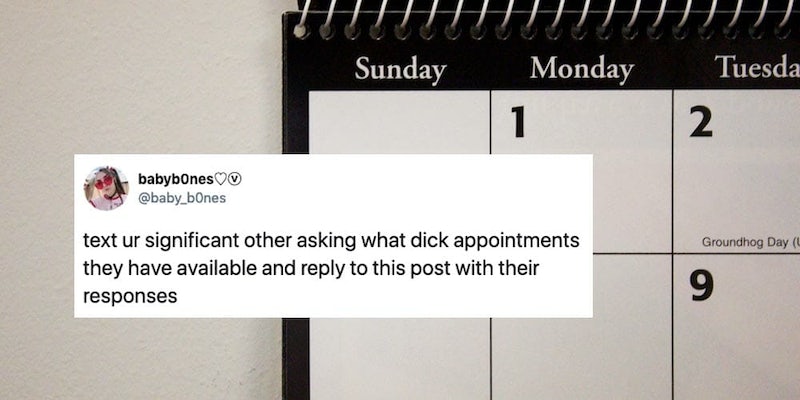 The ‘dick appointment challenge’ meme has people hooking up with punctuality

Once upon a time in the days of yore, the act of copulation may have involved prerequisite wining and dining. Now thirsting couples can just, well, schedule a dick appointment.

The phrase in itself is certainly nothing new, as there have been entire makeup tutorials dedicated to looking your best before and after a dick appointment. Dick appointments have taken on a new life via social media. They recently became subject of a Twitter meme, aptly referred to as the “dick appointment challenge.”

“Text ur significant other asking what dick appointments they have available and reply to this post with their responses,” Twitter user @baby_b0nes tweeted in May.

The tweet was accompanied with a screenshot of her own attempt to schedule an appointment, to which her man thoughtfully responded, “Why yes it looks like I have every spot open ever for you.”

text ur significant other asking what dick appointments they have available and reply to this post with their responses pic.twitter.com/RoafuIGh7M

And they say romance is dead!

“‘Hello I’d like to make a dick appointment, what do you have available?’ like every day,” the user initially wrote.

It didn’t take long for the movement to go viral, as plenty of people were more than happy to share their own dick appointment challenge tweets. “SO PROFESSIONAL,” wrote one woman whose significant other thanked her for her inquiry, offering her an appointment with “one of our most experienced practitioners.”

One woman’s boyfriend got so into it that he arranged to have his best friend act as the “appointment center” to confirm the booking.

But, not everyone’s men were as receptive to the gag.

hi, in need for a new man, this is UNACCEPTABLE pic.twitter.com/LDXVO5OQgT

“I just went through this whole thread and I’m mad as fuck I have 0 mans to text this too,” added one poor single who wanted in on the fun. Of course, it didn’t take long for some rando to slide into her DMs.

May your dick appointments be frequent and consensual.