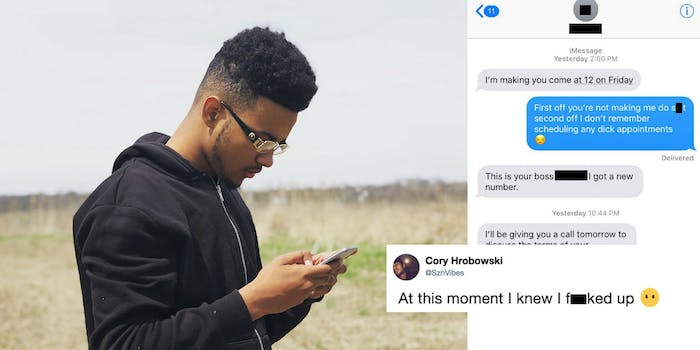 Congratulations, you played yourself.

A Chicago teen is bouncing back (virality! a job-free summer!) after accidentally assuming a random text was a “dick appointment,” when it was actually from his boss.

On Monday, Cory Hrobowski shared the screenshot of the cringe-y text altercation on Twitter, captioning the photo, “At this moment I knew I fucked up,” with a mouthless emoji.

Hrobowski had received a text from an unknown number stating the sender was, “making you come at 12 on Friday.”

Hrobowski told BuzzFeed News that he doesn’t save phone numbers often and gets “fed up” with unknown numbers quickly after a series of “bad experiences,” so he replied curtly, assuming it was from a “random girl.”

“First off you’re not making me do shit second off I don’t remember scheduling any dick appointments,” Hrobowski wrote back.

Within six minutes of the first text, the sender replied, “This is your boss,” and that they “got a new number.” At the time, Hrobowski worked at the front desk of a web design company, BuzzFeed News reported.

“When I found out it was my boss, I was actually super nervous,” he said.

Within two minutes of realizing his wrong, Hrobowski shared the exchange on Twitter, expressing his regret for the initial reply.

Hours later, Hrobowski updated Twitter, saying he still didn’t know what to say to the text. He said his boss had also called him, but he didn’t answer.

However, his soon-to-be-former boss beat him to it, texting him that night that they’d be “giving [him] a call tomorrow to discuss the terms of your employment with us.”

“I didn’t answer when she called and I’ve come to the conclusion that ima prolly just show up on Friday and see how it goes,” he wrote.

On Wednesday, Hrobowski was forced to resign, telling the publication that his text messages with the boss went viral and “got out of hand,” with his office and manager finding out.

Some Twitter users following the narrative came to his defense, saying his boss should have first identified herself in the first text to Hrobowski.

Who gets a new number and doesn't tell the person they're texting who they are off the jump?

That's rude on her end https://t.co/YChB2ZcJm9

Others, however, maintained that Hrobowski should have just responded calmly, instead of making assumptions about the sender. Also, maybe at least respond to your boss and admit you made a mistake?

You have issues if you respond to unknown numbers like this https://t.co/tuJP8AlIoz

The company, on the other hand, told the publication that it, and Hrobowski’s former boss, didn’t want anything to do with the situation and did not want to be named. A current employee called the situation awkward, to boot.

Despite shamelessly shaking off his viral resignation like a pro (“it was only a summer job I didn’t like anyway”), Hrobowski said he learned that he “shouldn’t be so quick to assume, and ask ‘who’s this?’ first when I get a message from an unknown number.”

Might we also suggest saving phone numbers of people you think you may hear from again, and maybe stop responding to random girls—or any woman for that matter—in such an assuming manner? Maybe also face the situation and admit to your boss you made a mistake? Just a thought.