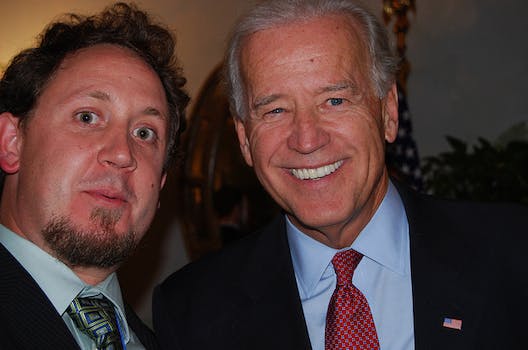 Hail to the "President of Vice!" Even the real Joe Biden took notice when his Onion alter ego did a Reddit AMA (Ask Me Anything) session.

Diamond Joe Biden, the fictional version of the vice president created by The Onion, took time off his busy schedule of washing his Trans Am— or was it using the Freedom of Information Act to stalk Jennifer?— to do a question and answer session on Reddit.

Diamond Joe followed Arnold Schwarzenegger’s suit and took to the popular news site to do an AMA (“Ask Me Anything”) to promote his autobiographical ebook, The Onion’s The President of Vice.

Amongst the topics discussed were President Barack Obama’s drug habits, the White House’s best locale for self-pleasure, his fear of Russian President Vladimir Putin, and his Trans Am, of course.

For your convenience, we’ve compiled some of Diamond Joe’s better answers.

“What’s the most amazing way you’ve ever opened a beer bottle?” (brettjonesdev) 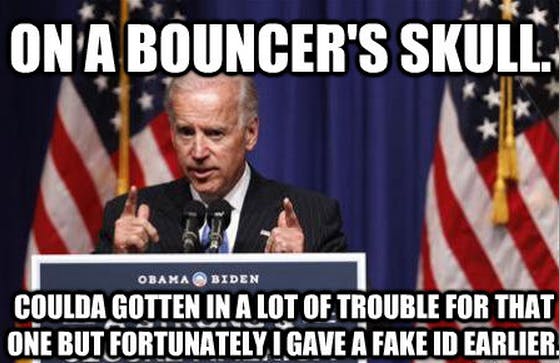 “What is the best place in the White House to ‘Five Knuckle Shuffle?'” (Sunshine_Hipster)

Plenty of great spots to release the tension, but I prefer to rub one out up on the White House roof.

Gotta buy the book for that one pal, Joe doesn’t stay buzzed and baked on karma alone.

“What’s this we’re hearing about you being a Corvette guy?” (Spoonsy) 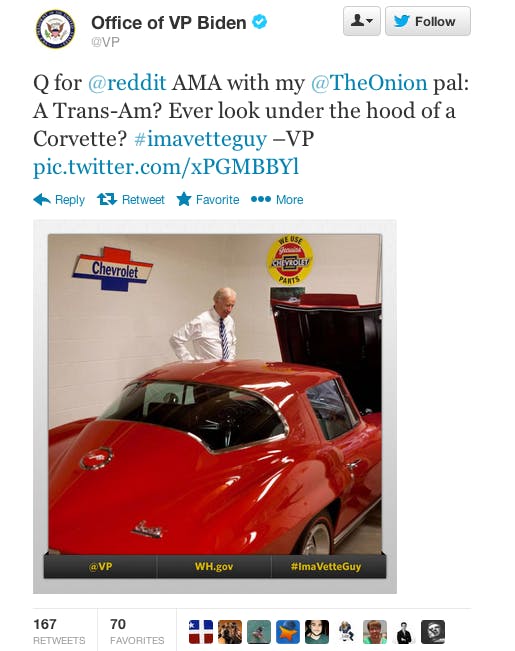 Photo via Office of VP Biden/Twitter

Great response for sure, but not as amazing as Diamond Joe’s:

I might be wiggin’ out a little right now, but I think there’s some imposter out there spreading bad shit about me. I’ll tell ya right now, whatever they say nothing can come between me and my Zam.

Now, I’d sure like to get under the hood of both members of the Grand Old Poon party.

“What was your longest sober streak?” (astartledgrandpa)

The amount of time between chugs.

I’d definitely be down for bonin’ that dude’s fake girlfriend.

“Hey Diamond Joe, I gotta hear the craziest thing you ever woke up next to and what you drank to get there. Then I’m going to do it.” (Taylorlessthan3)

Mei Xiang the panda, at the National Zoo. And you probably guessed, Cuervo and lots of it.

“you vs. Putin, Thunderdome rules- who wins and how?” (PopularScyence)

Putin. Jesus fucking christ, that guy is scary. I don’t want to go within twenty miles of that dome.

I’d be grinning ear to ear if either of them were sitting on my lincoln log. Both are sexy as hell.

“How much does your chance of being laid increase when Van Halen’s 1984 is played in the b.g.?” (socalscribe)

I don’t need to take chances, cuz it’s damn near always a sure thing. But nothing wrong with some sweet tuneage playing while a lady is romancing the bone

Barracuda’s a close bud of mine, but a little too clean to have his own stash. In my autobiography I talk about the first time I got him high.