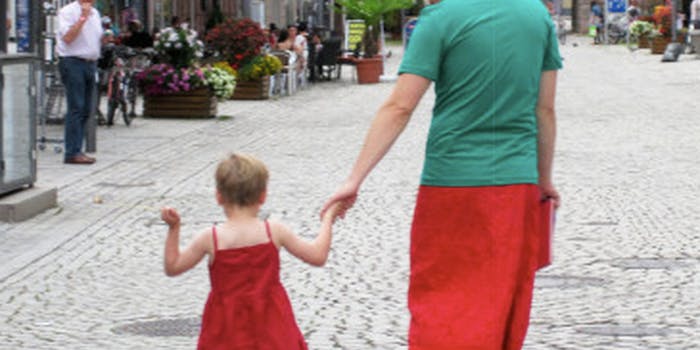 Thousands of fans on the Internet have shown their support for writer Nils Pickert, who wore a skirt to make his five-year-old son—who enjoys wearing dresses—feel more comfortable.

A father who wore a skirt in public to support his dress-wearing son is speaking out about the Internet’s reaction to his clothes.

Over the summer, writer Nils Pickert wrote an article for Emma, a prominent German feminist magazine. Pickert explained that his five-year-old son sometimes liked to wear his big sister’s old clothes in public. Pickert took to wearing a skirt in solidarity so nobody would bother his son.

After somebody translated the article into English, the photo went viral in late August. On Tumblr, one instance of the photo got more than 70,000 notes.

“During my vacation, the Internet did something I never expected—but obviously should have,” Pickert wrote for Stylelist. “Someone translated my article and it quickly spread across the world. I got emails and calls from people all over the place.”

Pickert said he was bowled over by Internet users’ responses to the photo. “Many people read the original EMMA piece and thought well of me; others were pissed off or disgusted by my alleged ‘sissy’ behavior. Others still presumed base motives—suggesting that I was trying to pull a stunt at the expense of my son—or accused me of bad parenting for encouraging his temporary dissocial preference.”

In response, Pickert wrote the English language article for Stylelist in order to respond to some of these accusations. The main thing he wanted to clear up—the fact that he wouldn’t be wearing womens’ clothing if he weren’t a dad.

“I will confess that I don’t particularly like wearing skirts or dresses,” he said. “I’m like a soccer mom who doesn’t love the sport—but does love her kids. I couldn’t care more about my boy being a happy, self-assured, compassionate person.”

Pickert’s son may grow out of wanting to wear dresses in public. But even if he doesn’t, he’ll always be able to count on his dad.