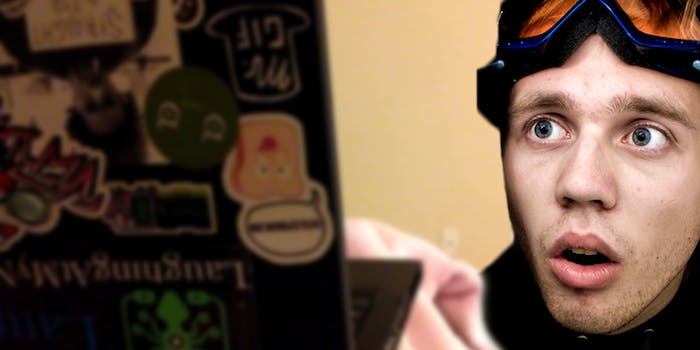 That’s why the curiosity gap is so insidious: it makes us care about information that we would have had no interest in learning before.

Sometimes, the infinite amount of knowledge that the Internet places at our fingertips makes us feel like we not only have the option to click, we have the obligation.

Earlier this week, The Atlantic‘s Alexis C. Madrigal discussed this feeling as it relates to the website Upworthy. (You know Upworthy; they’re the ones famous for headlines like “9 Out Of 10 Americans Are Completely Wrong About This Mind-Blowing Fact.”) Madrigal refers back to a New Yorker piece describing the phenomenon that these headlines capitalize on as “the curiosity gap” (e.g. the practice of revealing enough information to get the reader interested, but not enough to give away the point of what they’re clicking on).

Upworthy certainly isn’t the only site that does this; they’re just the most well-known for it and they’re the most successful at doing it. That’s why it’s surprising that the site is supposedly planning on getting away from this heretofore used method of attention-grabbing.

But the discussion of the curiosity gap doesn’t start and end with Upworthy and their maddening but intriguing headlines. More and more, we’re all becoming compulsive clickers.

At the very least, you have to wonder what being inundated with such a constant stream of information does to our attention spans. In fact considering that success on the web is more often than not gauged by click-through rate, it’s no wonder that many have suggested that the Internet is not only destroying our attention spans, but our brains altogether.

While a lot of these reactions seem a bit alarmist, it’s hard to argue that certain statistics are pretty disturbing. For instance, it’s been reported that between the years 2000 and 2013, the average attention span dropped from 12 seconds all the way down to eight.

Last month, The Guardian published a piece which cited a Pew Research study on American students suggesting that, “while students coming through the schools system in this always on world benefit from instant access to a wealth of information from numerous sources, their attention span and desire for in depth analysis is consequently diminished.” This basically indicates that while the curiosity gap itself is growing, curiosity for intelligent and detailed information is diminishing.

And then there’s the school of thought that suggests that no matter what kind of information you’re absorbing, we’re all starting to absorb it at an unhealthy rate. Tia Ghose of LiveScience argues that it’s the Internet’s unpredictability that makes it so addictive; this is the same unpredictability that the curiosity gap counts on.

“People are wired to compulsively seek unpredictable payoffs like those doled out on the Web,” Ghose writes. “And the Internet’s omnipresence and lack of boundaries encourage people to lose track of time, making it hard to exercise the willpower to turn it off.” She then quotes Tom Stafford, a cognitive scientist at the University of Sheffield in the United Kingdom, who theorizes, “The Internet is not addictive in the same way as pharmacological substances are…But it’s compulsive; it’s compelling; it’s distracting.”

Of course, Stafford himself says that the Internet isn’t addictive like drugs are addictive, and for most people at least, it doesn’t consume their lives the same way.

But it’s the “distracting” diagnosis that when taken to its most extreme conclusions becomes most troubling. That’s why the curiosity gap is so insidious; somehow it makes us care about information that we would have had no interest in learning before.

Writer George Saunders, who last year was named as one of TIME Magazine’s “100 Most Influential People in the World,” has talked about his struggles with this problem and how he has combated it, recalling, “I’d get online and look up and 40 minutes would have gone by, and my reading time for the night would have been pissed away, and all I would have learned was that, you know, a certain celebrity had lived in her car awhile, or that a cat had dialled 911.”

But perhaps the most problematic thing of all about the curiosity gap is the possibility that we’re not even retaining the information we’re distracting ourselves with.

Consider that when you read a book, you are forced to make a more deliberate choice to either pay attention or let your mind wander. But the Internet was built for skimming. By now, we’re used to clicking on one thing, only to have that turn into a rabbit hole which leads to us clicking on the next thing and the next thing and the next. If you set out to look for information in a book, chances are you had that book in mind specifically, and you’re more likely to invest your full cognitive ability in looking through it, and are therefore also more likely to remember what you learned from it.

The curiosity gap doesn’t operate this way. There’s a good chance that the first link you click on has nothing to do with the last. And with so many topics hitting you at such a high speed, can you really be expected to fully process everything you’re taking in?

But chances are that link won’t be the last thing you click on today. The Internet can be a wonderful thing. No one wants to be a finger-wagger like Bill O’Reilly. However, just as the Internet has increased our capacity for curiosity, the curiosity gap has made it all the more essential for us to be discerning in what we’re curious about.

So click away. Learn something new. Use this amazing resource to make your life better. Just remind yourself occasionally that you can stop clicking and go outside too.