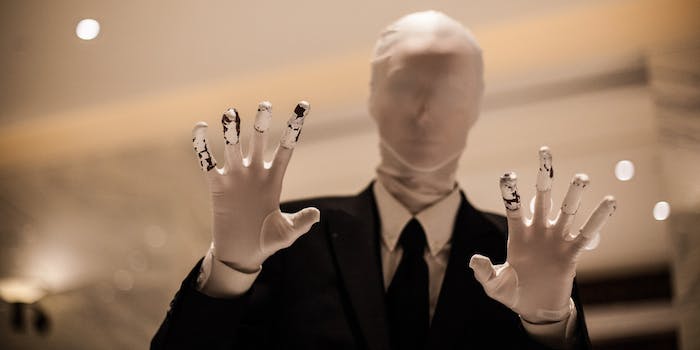 A response to people who think Creepy Corner is glorifying violence

This story made me ache.

By now, many of you who keep up with current events in the spooky sphere—Creepy Corner, Creepypasta, various paranormal websites, and really news at large—have heard about the “Slender Man” stabbing.

If you have not heard, this is briefly how the tragic events went down:

Two 12-year-old girls in Wisconsin became obsessed with the story of “Slender Man,” a “paranormal figure” that gained popularity on Creepypasta.com. One apparently claimed that Slender Man could read her thoughts.

In order to win favor with Slender Man, the girls decided they would kill a friend of theirs. They planned a sleepover (apparently their plans began December of last year) and invited the girl over with the intent to kill her that night. After killing her, they intended to “run away to the demon’s forest mansion in the Nicolet National Forest.”

On the evening of the sleepover, the girls did not manage to kill their friend, but instead “lured her to a park in the morning where they played a game of hide-and-go-seek.” It’s there that they stabbed the poor girl 19 times, narrowly missing a major artery near her heart.

Miraculously, she survived, if barely. The two girls left her bleeding in the woods, and she was able to crawl to a road where she was discovered by a bicyclist. She is currently hospitalized. The two 12-year-olds are facing adult charges on attempted murder.

This story made me ache.

So many lives destroyed by what was initially a harmless, if scary, Internet meme and story. As someone who deals in the scary side of popular culture, it really made me wonder about how we are consuming horror. Especially after I received a personal email, from someone who knows me, basically saying that Creepy Corner, along with Creepypasta, is “one of those Internet places that make terrible things seem cool.”

I can’t speak for Creepypasta, but I’ve gotten my fair share of dissent in emails, comments, even day-to-day conversations, that in sort-of playfully revelling in scary stories—many of which begin or end with terrible deaths—I’m participating in the glorification of suffering all in the name of a “good ghost story.”

I’d like to believe that this could not be further from the truth.

When I’m working on a Creepy Corner post, despite the jocular “CAN YOU BELIEVE THIS?!” kind of vibe I hope to impart, I do actually take what I write seriously. I know, I know, saying “I take this seriously” about a column about ghost voices, haunted dolls, zombies, and my fear of mirrors, makes me smirk a little too. But for every Creepy Corner that makes it to the Internet, there are 10 stories that I just can’t bring myself to tell with any sort of delight, as interesting or chilling as they may be.

And there are many times, especially when detailing stories that deal with killings or disrespect of the dead, that I wonder if I’ve crossed a line. Yes, Creepy Corner occupies a very small “corner” of the internet, but it doesn’t escape me that even the smallest influence can have an effect on a mind already headed down a disturbed path.

What I’m trying to say is that I feel a responsibility to present the darkly fascinating world of our fears with sensitivity. I don’t know if I always accomplish the sensitivity I aim for, but when talking about the death of a small child that results in a supposed haunting, for example, I stress over every word. There’s always the slight fear on my part that it appears I’m naming violence as an integral part of scary story alchemy.

Perhaps it’s more that I fear mainstream culture—movies, video games, music, TV—can only relate to horror in violent terms, and that our minds are geared to lump Creepy Corner in with such.

The haunting or legend surrounding a death may be sadly fascinating—we thrill in what we do not understand—but it is never my intent to point to a murder and say, “Isn’t that cool that that happened?” So much of Creepy Corner is looking closely at a tragic event, and the resulting stories, as a way in which people deal with sadness, loss, and fear.

The “glorification” (a word that was slung at me in a recent email) is not in the horrific events that lead to the spooky story, but in the reaction to those events. I can say with confidence that there is no Creepy Corner commenter that has ever thrilled in the death that created a spooky story. I may be pushing it a little here, but in a sense we participate in mourning, and the ghosts—real or not—are a symptom of that mourning.

Whether or not this needed to be said, I feel it is important to clarify in light of the attemped killing in Wisconsin. To look with horror upon something, then examine it, is not the same is embracing that horror.

When I read about Slender Man and Creepypasta’s involvement in the assault, it shook me. Immediately a part of me thought, “It finally happened.” With all the sickly scary stories available to young people on the internet—and Slender Man is a story, nothing more—there’s always been a fear in the back of my mind that someone would find inspiration in that specific brand of horror. This is not new, this is not the first, but it is the first time I couldn’t help but feel a pang of responsibility.

And I don’t think I’m going to change Creepy Corner, at least on the page. But I suppose in looking at my M.O. for these posts, laid out in black and white, I have a stronger resolve to proceed with much more respect for the people, real or not, that the stories revolve around. Whether we’re talking about Slender Man or Carl Tanzler, there’s always at least a shred of humanity in there. In the midst of a good story, it’s so easy to forget that somewhere in thick of it, there is or was a real living breathing person involved.

I want to remember that harder.

So thank you, Creepy Corneristas, for being such a smart and compassionate community. You really are the best part of Creepy Corner. I promise we will get back to our regularly scheduled creepy programming very shortly.

Louise Hung is a Contributing Editor at xoJane, as well as a contributor for Catster, Food Riot, and Cherry Pop Revue. This story was originally featured on xoJane and reposted with permission.