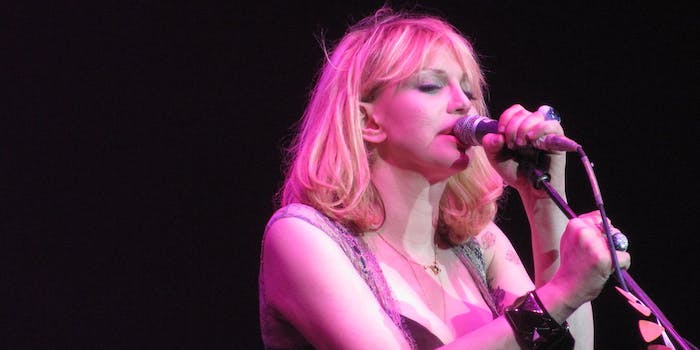 The assassination of Courtney Love

Can we stop blaming Courtney for Kurt's death yet?

I recently did something I almost never do: I blocked someone on Facebook.

After a day spent listening to Hole’s “Violet” on repeat, I status updated that I think the band is better than Nirvana. This is out of no disrespect to Kurt Cobain’s legacy; In Utero is a personal favorite of mine, and I love the darkness that producer Steve Albini brought out in the band’s radio-friendly grunge aesthetic, but I don’t feel the same way about it that I do “Malibu” or “Jennifer’s Body,” that tingling when it feels like all of your neurons are firing at the same time. For lack of a better phrase, listening to “Dumb” has never made me want to go fuck shit up the way “Doll Parts” does.

These discussions are a lot like picking between The Rolling Stones and The Beatles, saying less about the band itself than the person playing favorites, yet I quickly found myself heatedly defending Courtney Love’s musical legacy against the trolls of the Internet. The main points of argument were as follows: 1) Courtney Love didn’t write Live Through This 2) Kurt Cobain did and 3) thus, I must also like the Foo Fighters better than Nirvana. I don’t see how number three necessarily connects to the others, but welcome to arguing with relative strangers on Facebook, the place where Aristotle goes to die.

But if nothing else, I’m in good company. Since Live Through This hit stores 20 years ago, Love and her band have repeatedly debunked accusations that Kurt Cobain ghost-wrote the entire album for his less-successful little wife. The rumor has taken on a second life in the Internet era, informing the ways in which we remember the seminal record’s legacy. It even made it into Spin’s oral history of the album, in which the magazine sat down with drummer Patty Schemel and lead guitarist Eric Erlandson, as well as producers and executives who worked on the album. Describing the process of collaborating on songwriting with Schemel, Love said on the subject:

I wanted to be better than Kurt. I was really competing with Kurt. And that’s why it always offends me when people would say, ‘Oh, he wrote Live Through This.’ I’d be proud as hell to say that he wrote something on it, but I wouldn’t let him. It was too Yoko for me. It’s like, ‘No fucking way, man! I’ve got a good band, I don’t fucking need your help.’

Looking at Live Through This’ lyrical content, the ongoing accusations make so little sense they’re almost not worth addressing. Although “Doll Parts” was a radical departure from the album that came before it, Pretty on the Inside, its heart-piercing confessional honesty was markedly different from the opaque songwriting that marked Nevermind, whose “Smells Like Teen Spirit” was memorably parodied by Weird Al for making little sense. As Love suggests, the song was written out of a place of isolation and professional jealousy, a feeling of being overshadowed by the one you love. That’s not exactly fodder for a husband-and-wife jam session.

Similarly, the raw “Violet” pulls from Courtney Love’s traumatic and emotionally abusive relationship with Smashing Pumpkins frontman Billy Corgan; it’s a song that more closely matches the band’s debut, while suggesting a more introspective tone behind Love’s rage. It’s the sound of a band maturing as artists, a shift that marked Cobain’s own In Utero. As The Guardian’s Everett True argues, “You can certainly see her influence in Kurt’s lyrics. Before the pair met, it was often guesswork as to his intentions. Afterwards, his lyrics were far more direct.” For this reason, True says, “It would be just as accurate—and misleading—to say that Courtney Love wrote most of [In Utero].”

But part of Cobain’s post-mortem fandom relies on his artistic singularity, the myth of the lone “mad genius” fans lost too soon. The phrase found its way into a Salon article by Bomani Jones, looking at the band’s legacy a little over a decade after Nevermind changed rock music forever. “Cobain made depression and introspection vogue in a way that no singer-songwriter had previously done,” Jones wrote. “A crushing sound with an interesting pop sensibility created the perfect backdrop for Cobain’s lyrics, the portrait of a thoughtful, confused and compelling young man with acute difficulty dealing with the pain—physical, emotional and mental—in his life.”

While the account problematically romanticizes mental illness in a way Cobain’s own daughter has warned against, the idea of Cobain as singular and troubled is part of the reason that Nevermind continues to matter in a way that Live Through This does not. Although both albums were winners of their respective years’ Pazz and Jop polls, the yearly music critics round-up of influential albums, Love’s album didn’t even place in Rolling Stone’s 100 albums of the decade; Love also failed to merit a mention in the magazine’s round-up of music’s best guitarists, a list that only found room for two women.

Pitchfork likewise snubbed the record on their own decade-end list, whereas Slant found room for it at #38. However, Britain’s NME has been kinder, naming Live Through This their 84th greatest album of all time, whereas Spin (an aforementioned longtime champion of the record) was pretty much alone in placing Live Through This in their top 10—well ahead of In Utero, but still a comfy five spots behind Nevermind. If there’s one thing that Live Through This did top, it was all but headlining the Onion A.V. Club’s list of albums that deserve reissues “but probably won’t get them.”

Although the A.V. Club’s Jason Heller cites Love’s “public antics over the years” since Cobain’s death as part of the reason for the album’s critical devaluation—as we like our rock stars dead, not falling apart in front of us—there’s a simpler reason. 2014 also marks the 20th anniversary of Kurt Cobain’s death, an event that continues to eclipse any discussion of Live Through This. As the Internet collectively gathered to remember the icon on April 5, it continued to shun his widow—with some still blaming her for his death.

In 2004, authors Max Wallace and Ian Halperin—with the help of a private investigator—put to hardback the “Courtney killed Kurt” myth in Love and Death: the Murder of Kurt Cobain. The theory had gained enough steam that it had to be debunked by Dateline NBC, which concluded the author’s allegations that Cobain had too much heroin in his system to have committed suicide himself to be dubious. However, the theory is so persistent that Love’s own father contributed to it earlier this year, claiming he “can prove her involvement to a high degree of certainty.” Her father plans to prove so by reissuing his book on the subject, Love Kills: The Assassination of Kurt Cobain.

While it’s highly unlikely Courtney Love pulled the trigger on her husband, the thing that has been assassinated here is her reputation as an artist, lost in the shuffle of tabloid controversy. If she were a male rock star, Love’s behavior wouldn’t be a problem, but as a woman, they’re considered a major roadblock to her artistic appreciation.

Her band’s legacy has been so tarnished that many who didn’t grow up on Hole’s music might not even know they exist—often derisively referred to as “Courtney Love’s band,” as if it was her pet project and not one of the most important bands of its era. What was once a candidate for album of the decade is now a oft-forgotten treasure, something you fall in love with almost by accident. Like, who knew Courtney Love was such a great musician?

Of course, women have always found their work discredited and dismissed, whether artists, mathematicians, or scientists; nearly two centuries years after Frankenstein’s original publication, some continue to insist that Mary Shelley got help from her poet husband, Percy Bysshe Shelley. According to the U.K.’s the Telegraph, University of Delaware Professor Charles Robinson claims that Mr. Shelley made “5,000 changes to a pre-publication script of the classic novel.” Female musicians are often particularly ignored, even ones as notable as PJ Harvey or Carrie Brownstein, who is just as famous for her acting work as her music. (Remember: many listeners wouldn’t know Liz Phair if not for 13 Going on 30.)

Live Through This’ continued marginalization in the cultural canon might have a lot to do with Courtney Love, but it likely has everything to do with us. We might not be able to have an open conversation about Love’s importance as an artist now, but if it’s any consolation, history was a lot kinder to Frankenstein. At least 200 years from now, we might finally recognize what we missed out on.