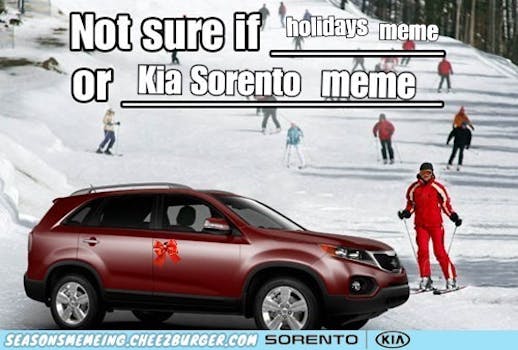 Cheezburger—the company behind LOLCats—lent its meme-based branding to Kia for an ad campaign, but Cheezburger fans don't find it very "funneh."

Folks don’t like it when you try to turn their online jokes into ad campaigns.

Cheezburger, Inc., the parent company of The Daily What and Know Your Meme,  has co-opted popular memes like Condescending Willy Wonka and Futurama Fry to promote the Kia Sorento.

The campaign, dubbed “Seasons Memeing Contest,” encourages fans of the site to caption ten custom-made macros featuring the Kia crossover using 26 different images and words for a chance to win a $100 gift certificate of their choice as well as a $1,000 prize to fund a classroom project via the online charity DonorsChoose.org.

Despite the financial and philanthropic incentive, burger lovers have not responded positively to the ad campaign. As of this writing, close to 70 different Kia-related memes have been posted to the site. Every single one of them has a more downvotes than upvotes.

Even worse, the few comments that the memes have garnered have been just as negative. Below are some of the least popular images submitted, as well as the condemning comments they’ve received. “Not sure if bad or BAD,” quipped DaFunny.

“This meme is definitely facepalm worthy. No more of this, please,” begged HilmBobbyJoe. “NEXT!!!!!!!!” “Kia, get off of the internet,” demanded Camden Davis. “This entire page is like someone barfed meme all over a car commercial,” noted matthias2099. ” None of this crap is funny, interesting, or entertaining.”

“The scumbag hat is actually fitting on this one, a shocking first for this meme series,” added Pepto-Bismol. “Who keeps throwing up cancer on all these kia memes attempts?” asked zck2020.

“One does not simply LOL at these memes,” snarked nkTJH7. Suffice it to say, this has not been a very successful campaign. Cue the sad trombone.

Sorry, Cheezburger, Inc., but looks like it’ll take a bit more effort in the ad business before you become Sterling Cooper Lolcat Pryce.