Ask a Freelancer: How to get out of the slush pile

Here's how to get yourself out of the slush pile. With style.

Melissa Chadburn is a lover and a fighter, a union rep, a social arsonist, a writer, of color, smart, edgy and fun. Her work has appeared in Guernica, Salon, and the Rumpus, among others.  In Ask a Freelancer, Chadburn fields questions about writing, the blogosphere, platform building, and all things scary. She doesn’t presume to know everything but she knows people that know more things than her and if there’s one thing she’s learned it’s that there’s nothing to be gained from withholding information. Reach her at fictiongrrrl(at)gmail.com or follow her on Twitter. She loves your whole outfit right now.

I’ve been writing for a while. I have a couple of stories and essays that I’d like to pitch for publication. But it seems like there are a lot of hoops to jump through to get noticed. Especially now with all the online journals. It seems the slush pile has grown. Some people say that the only way you can get your work read is if you have an agent. Also I live in a small suburb so I don’t have access to literary events or places where I can go meet editors. Most of the stories and essays I pitch are online. How do I pitch a story to editors without disappearing into the slush pile?

—Slushy in the Suburbs

I have a few concrete tips that have helped me weasel my way to the top of the slush pile.

First off, the basics:

Address your query directly to the editor you’re submitting the piece to. If you don’t know who the fiction editor is, for example, you can find it on the masthead. Online, the masthead is usually found in the “About” section of the site. This alone has gotten me personal responses. Even if that personal response is a rejection, pay attention to who signs the letter. It may be an intern or a “reader” —and address your future correspondence to that person.

Refer to a specific piece or story from this publication in your first paragraph of the letter. Exhibit that you are familiar with the type of work they publish and why you specifically are querying them. Something simple like, “this piece aspires to share the same aesthetic as Such and Such, from your Spring 2013 issue.” This small act has increased my personal response rate by 80%. Yes, I measured.

Also, even though you live in a small suburb, there are conferences held every year that could garner you some face to face exposure to editors—for example the Association of Writing Professionals, or AWP conference, that occurs annually. At these conferences major publications usually host a table where you can meet the editors and talk about what it is they’re looking for. It really is wonderful to meet them in person; I think you can learn a lot about an editor’s aesthetic preferences when you are face to face discussing books or their recent issue of whatever.

That’s the basics. But I also wanted to take this opportunity to use my golden bullet: Ask The Editor. As mentioned in my bio I don’t presume to know everything, but I do have friends that know things I don’t. Every now and again there will be a question I find better suited to people I know. So who better to tell you what editors like than other editors?

Here’s what I got from my own awesome editor of this very website, who is the greatest lady to ever hammer out my words into pretty silvery things, and a few tips she’d list straight, from the horse’s email:

My own editor Cinderella story goes like this: I began by sending a boilerplate query letter to an editor at a top tier journal. I did reference a specific essay or story but only had the name of the managing editor of the journal. Six months later I got a response. It was a rejection but there was a little handwritten note in the corner—signed by the Asst. Editor. I sent my next query directly to her, like I’ve suggested you do. And again six months later I got a response still a rejection—but another hopeful note. So far, we have had a three year correspondence mostly by marginalia of my query letters. Since then this editor has experienced some personal loss in her family and I have sent my condolences (again by way of query). We finally got to meet and hug for the first time last AWP. This story doesn’t end with me finally getting published in the top tier journal. This story ends with me actually getting out of the slush pile. A much greater privilege. I have a friend in this editor. A friend whose opinion I respect.

One last little thing. Here’s something I enjoy doing for myself, if I have to submit something by snail mail and include a S.A.S.E. for a reply: I write a little note to myself on the lip of the envelope. Like this: 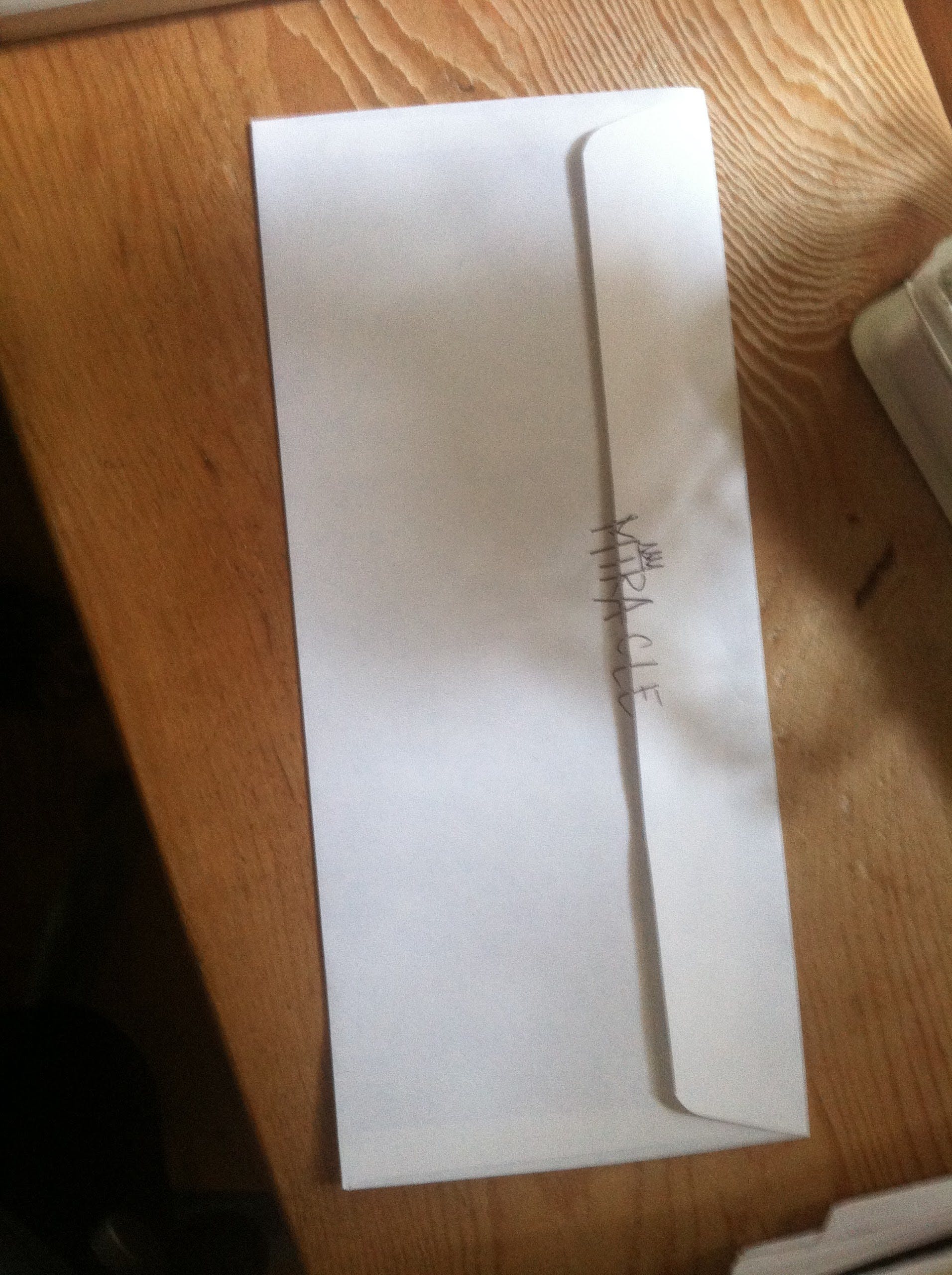 So it’s the first thing I see when I get it back.

Photos by nojan/Flickr and by Melissa Chadburn